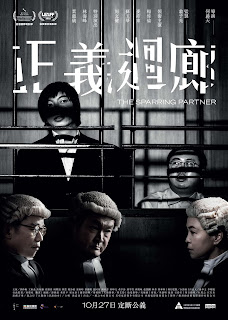 Glad to have caught a screening of The Sparring Partner
before it officially gets released in Hong Kong cinemas!
The Sparring Partner (Hong Kong, 2022)
- Ho Cheuk-tin, director
- Starring: Yeung Wai-lun, Mak Pui-tung, Louisa So, Jan Lamb, Michael Chow
This legal drama adapted from a sensational real-life case -- about a man who partners with a friend to murder and dismember his parents -- was among the local entries that I had wanted to view at this year's Hong Kong International Film Festival (where it had its world premiere) but was unable to do so as a result of tickets for its two HKIFF screenings selling out within hours, if not minutes.  This despite The Sparring Partner being helmed by a debutant director and featuring a cast without a single cinematic A-lister among them (though, as they show in this film, they are actually excel at their craft).
It's my good fortune though that I've managed to view this thoughtful and thought-provoking work before it begins its local theatrical run.  And while I didn't end up doing so at the Hong Kong International Film Festival (unlike the case with veteran filmmaker Mabel Cheung's To My Nineteen-Year-Old Self -- which, at the time of writing, still has no announced local release date), I was fortunate to be able to meet and chat with The Sparring Partner's helmer after the screening I attended.
Over the course of the conversation, I found out that Ho Cheuk-tin has a theatre background; as does a number of the actors he cast in this involving, intelligent film (one of whom, Mak Pui-tung, won a Golden Firebird Award for acting at the recently concluded Hong Kong International Film Festival in what is only his second ever film role).  In retrospect, this makes a lot of sense -- as a number of The Sparring Partner's scenes are staged very creatively: with the movie not only featuring the kind of in-court, lawyer-client meeting and jury deliberation scenes that one would expect of a serious and conventional legal drama but, also, dramatic re-enactments of the crime that have the jurors in the picture, viewing and reacting to them.  And there also often is a theatrical feel to much of the movie (that helps make it feel like a "high brow" production even while its sensationalist subject is one that one might assume would have attracted more "low brow" interest).
Something else that arguably shows The Sparring Partner's roots in theater is that its lead actors don't have movie star looks.  Indeed, it would seem that Yeung Wai-lun (playing Henry Cheung, whose parents were the unfortunate murder victims) and Mak Pui-tung (who portrayed Angus Tong, the friend in whose apartment the couple were killed, and whose IQ is revealed to be on the low side) emphasised the less physically attractive aspects of their being to good effect for the film -- and made it so that Henry Cheung was easy to be looked upon as a loser who nonetheless was a major egomaniac, and Angus Tong could come across as sad and pitiable.
In comparison, the defence lawyers for the duo cannot help but come across as sophisticated as well as sleek.  Jan Lamb is a positive revelation as Henry Cheung's defence counsel, Wilson Ng, while Louisa So more than holds her own as Angus Tong's defence counsel, Carrie Yau.  And as chief prosecutor Allen Chu (whose first language is English and subsequently is liable to linguistic mistakes when speaking Cantonese), Canadian-Chinese actor Michael Chow gets to showcase both his comedic as well as dramatic acting abilities to good effect.
And while the actors and actresses who play the case's jury members individually don't get as many lines as those who play the accused and the key lawyers in The Sparring Partner, they (who include an actor long-time Hong Kong movie fans will know as "the white haired guy" from many a Milkyway Image production) are to be commended for carving out individual identities that help get one understanding how and why they reached the conclusions that they did by the trial's and movie's end.
Even more importantly, they -- along with the rest of the cast, director Ho Cheuk-tin, and co-scriptwriters Frankie Tam, Oliver Yip and Vincent Leung -- help viewers recognise and understand why trial by jury often dispenses justice and compensation in a way that a non-jury trial may not be able to; something worth noting in a Hong Kong which has had a long history and tradition of jury trials but where a number of trials (think the national security law ones, especially) no longer are so.
My rating for the film: 8.0
Posted by YTSL at 9:05 PM

Hope all is well.
Coffee is on and stay safe

Sadly, there are too many things rotten in the state of Hong Kong for me to be able to say that all is well.

thanks for the well written review. agree without doubt, after watching it in the theater.

Thank you for reading my review. Am glad you agree with it, and also that you went to see "The Sparring Partner". :)