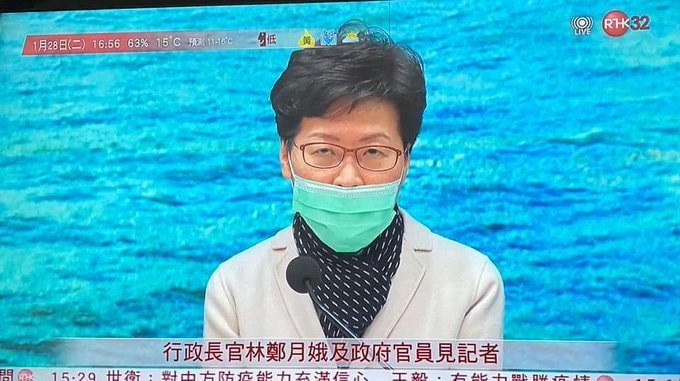 She really doesn't know how to do things correctly, does she?!
Hong Kong's least popular Chief Executive ever appeared in public today wearing a mask.  It says so much that she didn't only do so so late in the "game" -- that is, close to one week after Hong Kong had its first officially confirmed case of the Wuhan coronavirus and close to one month after China alerted the World Health Organization to there being several cases of what is now known as Wuhan pneumonia in the eponymous Mainland Chinese city -- but she didn't seem to know or be inclined to wear a surgical mask in the proper manner.

Following an emergency meeting with her top ministers and advisors, Carrie Lam held a press conference to announce a partial closure of Hong Kong's borders to try the stem of the Wuhan coronavirus into the territory.  The big problem, as many people rushed to point out, is that the six cross-border checkpoints that she has chosen to close of Hong Kong's total of 14 happen to be the six where the fewest number of people cross into the territory!

Put another way: she is apparently hoping to fool people into thinking she's effectively done something when she in fact hasn't.  Sound familiar?  Also, if anyone doubts her insincerity, consider that her government is still pushing for the Court of Final Appeal to reinstate the mask ban that she used emergency laws to introduce but was ruled to be unconsitutitional by the High Court and thus suspended.

Once more, Carrie Lam is playing a very dangerous game -- and refusing to heed the judgement, advice and entreaties of experts in the relevant field.  So strongly do a good number of medical professionals feel that all of Hong Kong's borders should be closed to Mainland Chinese that they are considering going on strike if that is not done -- a move supported by many other Hong Kongers, to the extent that some are prepared to join in a strike and reinitiate the kind of protest actions that involve shutting down transportation within Hong Kong.

For those who (still) think people are panicking for no reason: Consider that since I last posted just two days ago, the death toll from the Wuhan coronavirus has jumped from 56 to "at least 106" and spread to still more countries, including Germany, where a German national contracted the virus from a Chinese colleague visiting from Shanghai.  More than incidentally, there now is a website that is providing real-time Wuhan coronavirus infection and death numbers.  As I write this blog post, the total number of people who have been reported as infected is at 4698 but I fully expect that number, and also the death toll, to rise by the time I check it again tomorrow morning. :(
Posted by YTSL at 11:59 PM

And in other news, so far this flu season in the USA alone approximately 6.4 million people have been infected, 55,000 have been hospitalized, and 2,900 have died.

But for some reason you don't panic about this.

Furthermore, there's the suspicion that the authorities in Hong Kong as well as over on the Mainland aren't acting as quickly and efficiently as they should, in no small part by their appearing to try to act politically and cover things up. I'm sure there would be a lot less panic about the Wuhan coronavirus if people felt they could trust the authorities in Hong Kong and Mainland China (more).

Moreover, CDC data shows that having the vaccine year after year lowers its effectiveness in each individual, and that only 14% of acute respiratory illnesses are caused by influenza anyway.

And if your immune system doesn't deal with an influenza infection (whether stimulated by a prior vaccination or not) then there is no cure for it.

Maybe -- but the thing with the flu virus is that it's been around for a long time and people have some familiarity. With the Wuhan coronavirus, it's the shock of the new -- and combined with, like I said before, distrust of a secretive government (China's) and one that seems to be against the majority of its people (Hong Kong's), I can see why people are so fearful.

P.S. Wuhan virus death toll now up to 132 recorded, with 6161 infections in 19 different territories. Pretty scary, to my mind, re a virus most people didn't know existed just a month ago.