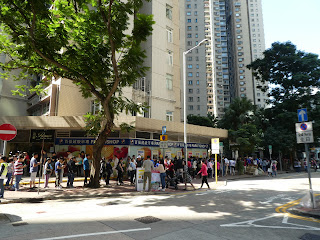 Not a line for bargains at the local ParknShop
supermarket or, for that matter, any shop or store! 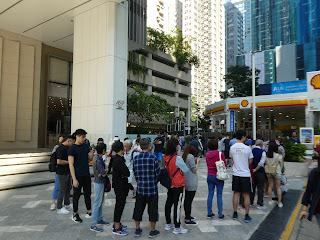 Rather, people queued up for hours today to cast their vote in
the only fully democratic city-wide election that Hong Kong has 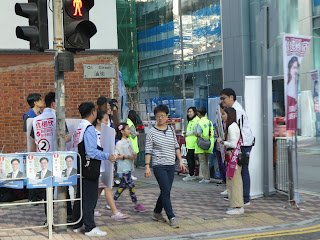 I got up earlier than usual this morning to vote for the first time in the District Council Election.  (The previous time I was eligible to do so, the (pro-Beijing) candidate in my area had run unopposed.)  In the days leading up to it, messages were shared online (and on Lennon Walls) urging people to go and vote early, in case they got prevented from doing so later in the day.  With memories too of long lines late into the night at Taikoo Shing and Lam Tin for the 2016 Legislative Council elections, I figured it would indeed be better to get over to my local polling station closer to 7.30am (the polling start time) than 10.30pm (the polling closing time).

As it turned out, I ended up waiting in line for more than one and a half hours to cast my vote.  It was quite the contrast to the previous occasions when I had voted in Hong Kong.  On each of them, I had just walked into the polling station and been done with the whole process in less than 10 minutes!   Yet today, my experience was the rule rather than the exception; with other friends sharing about having joined long queues at their respective designated polling stations too -- though there was one who stated rather smugly that when she went to vote at around 4pm, she got to breeze in and out in far less time than it had taken her husband, who had opted to go cast his vote in the morning!

It's not just that lots of people went earlier than usual to vote today though but, rather, that lots more people went to vote today than is usually the case for District Council elections.  In the past, many people didn't place much importance on these elections because the District Councils are the lowest tier of government in Hong Kong.  But their significance has latterly been realized on account of such as their being the only fully democratic elections in Hong Kong (unlike that for the Legislative Council, never mind Chief Executive) -- and as such, can be utilized as a referendum on the Hong Kong government as a whole -- as well as there being practical benefits to winning seats on, and control of, District Councils.

By 9.30pm, more than 2.85 million people -- that is, 69 percent of the electorate -- had cast their votes.  With unprecedented numbers of people turning out to vote today, hopes are high that there will be a large number of pro-democrat victories; this especially since some of the highest voter turnouts have been in areas that have seen lots of protest (and negative action by riot police).

At the same time though, there are some fears about the record voter turnout; with the possibility of phantom voters definitely existing along with vote rigging.  And, already, there's ample evidence of the usual shenanigans pulled by the pro-Beijing camp: namely, vote buying and the distribution of all manner of goodies to those who vote for them.  Also, as if that's not shameless enough, there's their instructing elderly people who don't seem to be entirely sound of mind who to vote for at polling stations.

Additionally, despite Electoral Affairs Commission chairman Barnabas Fung declaring that "Everyone has to queue up to enter the polling station, and there's no priority or preference given to anyone", there apparently were people who got to vote at a different polling station from their designated one (on account of their being wheelchair users) over in Kennedy Town.  And I am pretty sure that I saw elderly people and the family members accompanying them getting to jump the (very long) queue at my polling station this morning!

So I think it's understandable then that I still am feeling really tense even though polling closed some time back.  And seeing the number of riot police in the area around my polling station (which happens to be located just a few minutes' walk away from my residence) increase from two this morning to about eight this afternoon to at least a dozen in the evening doesn't help me feel relaxed either.

Call me paranoid but I'm still deciding whether to close all my windows tonight (in case tear gas gets fired in my area) or not (because my place would get stuffy with the windows closed).  Also, after posting this blog entry, I plan to go and watch the votes being counted at my polling station.

Still, rather than end things on a depressing note, here's stating that: If nothing else, the high voter turnout at today's District Council election clearly shows that Hong Kong people want to have a say with regards to their government. Fingers crossed for the news tomorrow to be further in favor of democracy.  And as it is, it's really nice that this has been the first tear gas free weekend Hong Kong has had in quite some time!
Posted by YTSL at 11:59 PM