Hiking in a quiet, out-of-the-way part of Hong Kong (Photo-essay)

As hiking becomes an increasingly popular activity in Hong Kong, it's become rarer and rarer to feel like you've got the trail to yourself.  As I've found to some surprise though, it's still actually possible; this especially if you venture along a hike route that's not a part of any of the territory's famous four "long" trails (i.e., the Maclehose, Wilson, Lantau and -- especially -- Hong Kong Trails).

Take, for example, a section of a trail on Lantau Island that's not a part of the Lantau Trail which a friend and I chose to hike along one Sunday afternoon a while back, during which we didn't see another single person!  Part of the unpopularity of this trail on the Chi Ma Wan Peninsula stems from its trailhead not being near any bus stop, minibus stop or MTR station.  And while one can catch a ferry from or to a public pier located on the eastern side of the peninsula, the limited service makes it so that you have to time it right; otherwise, you're faced with a rather draining trudge back to civilization!

As it so happened, we got to the pier too late to catch the ferry we were hoping we'd be in time to take us out of the peninsula that afternoon because we had spent so much more time stopping to admire the stunningly quiet scenic views to be found along our hike.  Consequently, we had no choice but to walk all the way back to Pui O.  But even though my pedometer showed that I ended up walking over 25,000 steps that day, I still will maintain that all that (extra) effort  actually felt worth it -- and I'm trusting that my hiking companion that day felt similarly! ;b 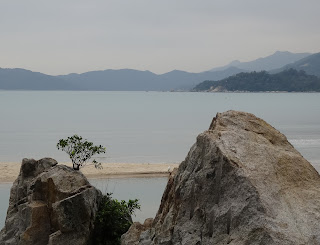 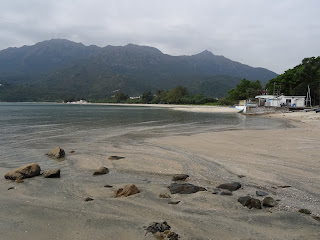 Yes, there really are parts of Hong Kong that are
on the distinctly rural side and bereft of crowds! ;b 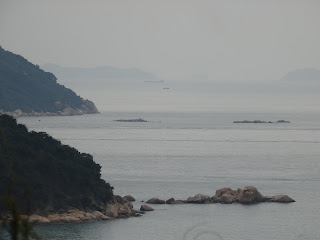 My secondary school art teacher was so right when
she told us that the sea isn't just one shade of blue... 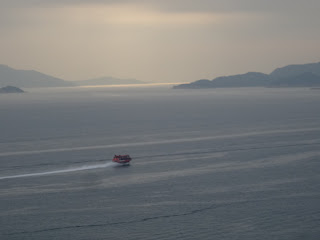 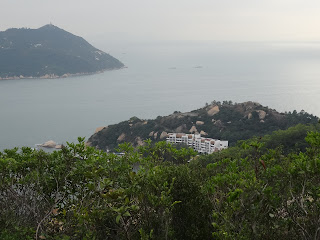 Back in the 1970s, the Sea Ranch development came about
because it was thought there'd be a market out there for people
to live in splendid isolation on Chi Ma Wan Peninsula... 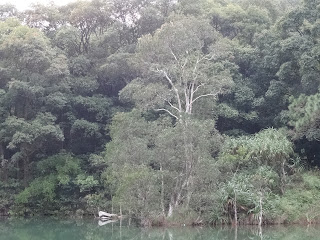 On the water's edge at Shap Long Irrigation Reservoir 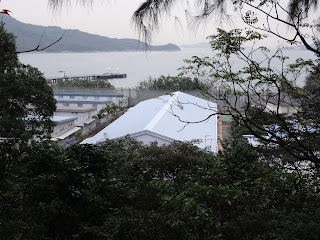 The pier, with its lights on, located near two now disused
correctional institutions, and from where we'd have
caught the ferry if we had been on time! ;S 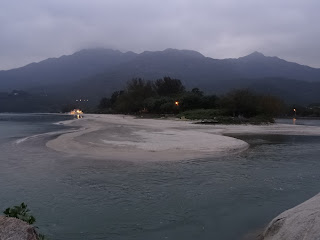 Lights on and tide in at Pui O on our way back there!
Posted by YTSL at 11:59 PM

This weekday hiking entry is so good, that it's hard for me not to leave a comment. Such is the near-alchemical combination of words and photos, that it puts the reader inside the blogger's viewpoint as they experienced the Chi Ma Wan Peninsula on that day. Muted blues and grays don't have to be dull, but in this case they depict the distinct character of this "Quiet, out of the way part of HK."

Some of the photos invite meditation and the ocean itself begins to resemble layers of rock...Would have to say the bottom photo is my favorite because the balanced composition of sand, water, background lights (twilight?), mountains and sky is about perfect. These photos are reward enough for the 25,000 steps taken.

Thanks for your lovely words re the photo-essay. And yes, I totally agree that "muted blues and grays don't have to be dull". :)