There are a number of annual events in the Hong Kong cultural calendar that I try not to miss.  Even before I moved to the Big Lychee, I already would make it a point to attend the Hong Kong International Film Festival (which is getting off to a later start than usual this year -- and for which I got tickets for 18 screenings just this morning!).  But other events that I've added to my "must check out" list over the years include the Hong Kong Arts Festival, the mega art fair now known as Art Basel -- Hong Kong, the lunar new year flower market, and the Hong Kong Flower Show.

With this year's edition having got going when I was away in Penang, I was glad to find it still going on upon my return -- and, in fact, runs through to this Sunday.  In fact, so eager was I to go check it out that I went over to Causeway Bay one afternoon despite it actually still being on the drizzly side -- and was rewarded with the rain stopping altogether less than hour an hour into what turned out to be a visit there of more than two hours (which I only put to a halt because I was getting hungry but didn't fancy paying over the odds for mediocre looking food within its grounds)! 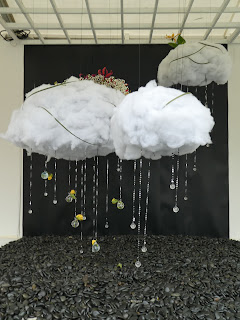 Did the person who created this floral arrangement
know something the rest of us didn't? ;O 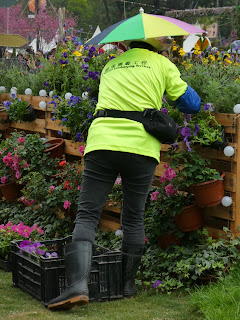 Talk about being prepared... including to
be the object of attention while doing your job! ;b 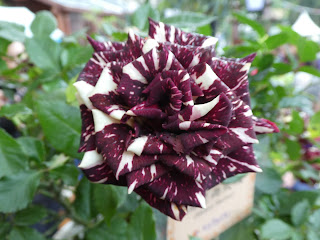 Speaking of eye-catching: this Meteor Shower rose sure is :) 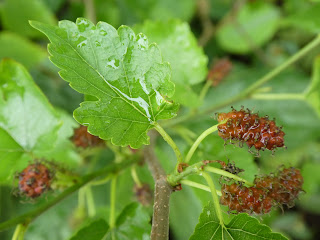 It may not be as visually attractive as others but
its Dragon's Tongue name sure is evocative! 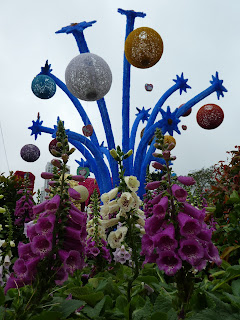 The combination of the artificial and the natural
sometimes can make for a pretty picture :) 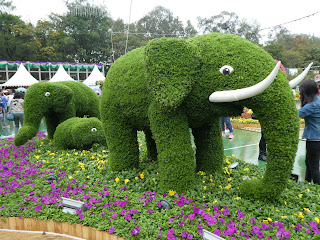 What's the Hong Kong Flower Show without
some whimsical creatures?! 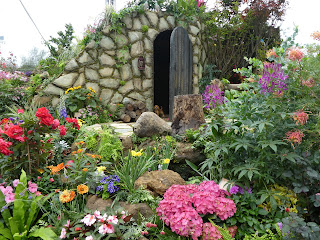 A great composition with a charming fake --
but non-floral -- puppy peeking out at people ;) 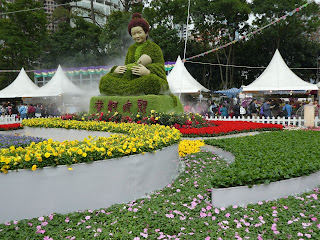 I must say though that the one mega floral arrangement that got me
gasping in surprise, and almost disbelief, was this -- whose centerpiece
was a mother and child figure around which white smoke billowed! ;O
Posted by YTSL at 10:06 PM