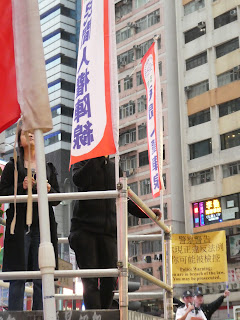 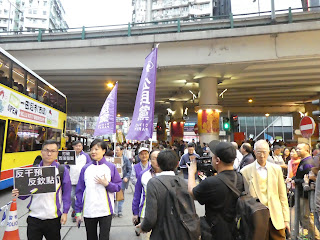 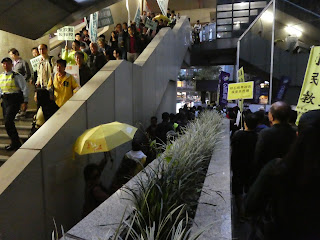 Denied the right to march on the street, protesters make use of
overhead bridges, sidewalks and such like at points in the march! 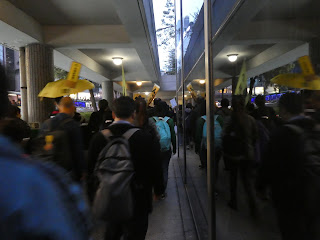 We may not be able to vote but we shall be seen and heard!

Earlier today, a good number of Hong Kongers from various walks of life, and ranging in age from young adults to the noticeably elderly, elected to take part in a protest march they had been warned was illegal.  Despite the threat of arrest and prosecution, they/we felt an obligation to register our objections to the so-called election of Hong Kong's next Chief Executive that's due to take place tomorrow.


Here's why people think that it's a sham election or selection rather than actual election: despite Hong Kong possessing a population of some 7.3749 million people and close to 3.8 million registered voters, only 1,194 individuals will get to decide tomorrow which of three candidates will succeed the reviled incumbent known as 689 because that's the number of votes he received at the previous Chief Executive "election".  And if this is not bad enough, consider that Beijing has been very actively interfering in the process by doing such as making their preferred choice very clear and even leaning pretty heavily on those with a vote to cast to try to ensure that they do its bidding.


Some two and a half years ago, I held discussions with people on the streets of Hong Kong during which I envisioned a nightmare scenario involving Hong Kong chief executive elections where the candidates would consist of Leung Chun Ying, Regina Ip and Carrie Lam.  While that did not come to pass, the prospect of Carrie Lam becoming Hong Kong's next Chief Executive is sadly all too real; this despite her trailing rival John Tsang by a substantial margin in the popularity stakes and her handling of the Palace Museum Project currently being under investigation by the Independent Commission Against Corruption (ICAC).

The very inevitability of Carrie Lam's selection should be ample proof enough of how wrong Hong Kong's current small circle "election" system is.  For this is a politician so out of touch with the regular world that she didn't know where to get toilet paper after midnight (or to think of using such as tissue paper instead to serve the purpose she required the toilet paper for) on her first evening as an ex-senior government official (with underlings to attend to such small jobs in her stead) and doesn't appear to know how to use an MTR turnstile!

Actually, this woman lost me a while back when she voiced her absolute certainty that there was a place in heaven reserved for her!  And it really did not assure me to learn in recent months of her believing that God had told her to run for Chief Executive!  For, among other things, surely it's a sign of utter arrogance to feel that one has such an exalted relationship with a all-mighty being?  And whither all this in view of Communism's founder, Karl Marx, having asserted that "Religion is the opium of the masses" and the so-called People's Republic of China still at least nominally being ruled by Communists?!

Returning to the issue of the (s)election of Hong Kong's Chief Executive: I not only genuinely believe that if more Hong Kongers had a say in this matter Carrie Lam would not be Hong Kong's next leader but, also, that Hong Kong would have a Chief Executive who would not be so arrogant and have to listen more to the demands, grievances and dreams of the people.  And I know I'm not alone in this since the old Umbrella Movement slogan of "I want genuine universal suffrage" was heard issuing from the lips of many, and many times, over the course of this afternoon's protest march.
Posted by YTSL at 11:36 PM