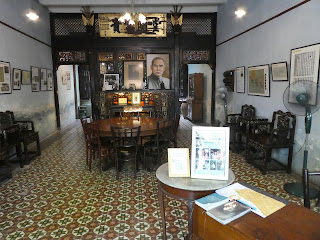 Sun Yat Sen looms large in the history of
this Penang heritage building... 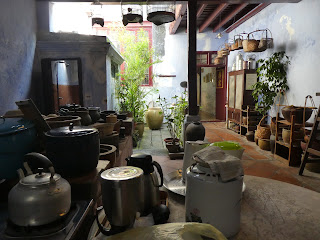 ...for in addition to having been a local merchant's home,
it also was the Chinese revolutionary's Penang base!


Last week, I returned to the site of my first encounter with a Chinese movie star.  Rather than it being here in Hong Kong, it actually was back in Penang; at a location which actually is far more well known for the part it played in Chinese history than in a Chinese film.


Built around 1880 as a merchant's home, the long row house at 120 Armenian Street served for a time as the home of the Penang Philomathic Union, a reading club which was a cover for the underground movement led by Dr Sun Yat Sen, the Chinese revolutionary who had a major hand in overthrowing the Qing dynasty and establishing the Republic of China (which continues to this day in Taiwan).


In 1910, Dr Sun moved the Southeast Asian headquarters of his Tongmenghui party to Penang.  After setting up residence as well as his political homebase in this townhouse, he also went on to establish, publish and print copies of the Kwong Wah Yit Poh newspaper -- which remains in operation to this day and is the world's oldest Chinese newspaper -- at 120 Armenian Street.


Unbeknownst to my friend, years before I became a "born again" Hong Kong movie fan when living in Philadelphia, I had seen Winston Chao star in Ang Lee's entertaining The Wedding Banquet (1993) and also had seen him in Ang Lee's sublime Eat, Drink, Man, Woman (1994).  But I had to come associate him with Sun Yat Sen after seeing Chao playing the Chinese historical personality in Mabel Cheung's The Soong Sisters (1997) -- and, as it turned out, have subsequently seen the actor also portray Dr. Sun in another film (1911) as well as Road to Dawn.


After moving to Hong Kong, I viewed another Hong Kong movie about the 1911 uprising.  Directed by Derek Chiu, 72 Martyrs had its theatrical release during the 100 year anniversary of a key revolt which took place in Guangzhou but in which a number of Penangites and other overseas Chinese played significant parts.

I must admit: it felt rather strange to watch a Hong Kong movie in Hong Kong with scenes set in Penang and featuring characters from there.  It had happened before (with such as Moonlight in Malaya).  But I think in the case of 72 Martyrs (and also, Road to Dawn, which I ended up watching in a Hong Kong cinema years after I had left Penang), there was more emotion involved because I was watching what actually were important events in Chinese history being shown having taken place in my home state!
Posted by YTSL at 11:59 PM