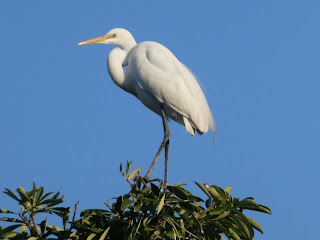 Standing tall as a singleton on Valentine's Day 2017! 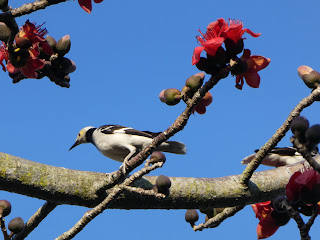 This is not least since being single contributes quite a bit
to my feeling free as bird on beautiful days like today :)
Before anything else: the photos at the top of this blog post were taken this afternoon as I made my way to my favorite roast goose place for dinner after a thoroughly enjoyable Cloudy Hill hike excursion that I went on with a friend.  At that point in the day, I was on my own as my hiking buddy had hurried home earlier to celebrate the Feast of Saint Valentine with her husband.  But, in all honesty, I didn't much mind since I still was on a high after a very satisfying hike in wonderful weather -- complete with super high visibility and bright blue skies -- during which I had seen Cloudy Hill totally minus cloud cover -- something which, as its name implies, is actually a pretty uncommon state of affairs!
And to think that I would have missed out on this if my original plan for this evening had gone ahead: that is, I had proposed to a good but platonic friend of the opposite sex that we have an anti-Valentine's Day dinner at Uehara.  But since the restaurant turned out to be already fully booked for tonight when I called to make a reservation a couple of weeks ago, we'll "just" be treating ourselves to another omakase dinner there this Thursday instead of this evening!
Should it not be clear: here's confirming that I'm so not a fan of this particular holiday and have been known to organize anti-Valentine's Day "dates" with one or more platonic friends, many -- but by no means all (since I've discovered there are married people who don't care for this day too!) -- of whom are fellow singletons.  Among the more memorable of these was the time a few years back when a whole bunch of us went out for a hotpot dinner, reasoning that this kind of dining is extremely unromantic since it's communal and tends to leave diners (particularly their hair and clothes) smelling quite strongly of whatever they had chosen to eat that evening!
And even though there were years in the past when I was in a relationship when February 14th came along, by far my favorite Valentine's Day ever was the one that took place during my final year at boarding school in England.  Early on in the morning, many of us had been filled with dread by the thought of not receiving any Valentine cards; a humiliation that would be very public since the teacher on duty would hand out the mail to students over breakfast in the school dining hall.
But when the time came for the post to be handed out, I ended up being far from empty handed... since my four best friends at school (three of whom were female and one male) had sent me Valentine cards!  As it so happened, I had done the same for them -- and they had also done the same for one another.  That all this had not been collectively planned made it all the sweeter; with the icing on that day's cake coming from various other students having cast us looks of envy, not knowing -- or maybe even caring! -- that the Valentine cards we had received (and sent) had all been to people we loved for their friendship rather than something else altogether! :)
Posted by YTSL at 10:32 PM

I've been searching for your blog. I lost all the links I bookmarked when I changed computers. Happy Valentine's Day.

Worth a Thousand Words

Actually, I had a happy anti-Valentine's Day but thanks for the good wishes all the same. :)

Sounds as if you did have an enjoyable Valentine's Day, but I think it would have been a memorable time any day of the year. Top photo of one of my favorite birds, expresses the full meaning of this blog that I can truly relate to since I'm a lifelong singleton who proudly has never been confined to the aviary known as marriage.

Hurrah from one comfortably/happily single singleton to another! More than BTW, think you'll particularly appreciate this: I've sometimes had people ask me how I've managed to have the time to do this or been able to do that in life. My usual reply: it's because I'm single rather than married with kids! ;)