Dorrance Dance's ETM: Double Down is tap dancing and more 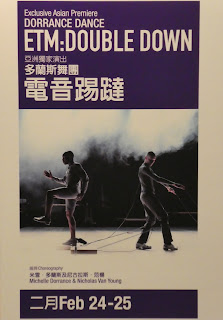 Advertising for the second Hong Kong
Arts Festival program I've attended this year
Thanks to my having viewed clips of them performing in the original That's Entertainment! and its follow-up films when I was a child, visions of Fred Astaire and Ginger Rogers come to mind whenever I think of tap dancing.  But as American company Dorrance Dance showed this evening, with their Hong Kong Arts Festival performance of ETM: Double Down, tap dancing can be so very different from the classic, elegant tuxedoes and ballgown images which Astaire and Rogers conjured up.
Created by Dorrance Dance's artistic director Michelle Dorrance and Nicholas Van Young, this program has sections that get you thinking that the tap dancers have turned their bodies into musical instruments as well as others where their bodies and movements express a variety of emotions including physical lust, romantic rejection, exuberant energy and sheer, uninhibited joy.
Also featured in this 11-performer show are breakdancing moves (courtesy of Ephrat "Bounce" Asherie), what I'd describe as voice music -- as they are songs without words (courtesy of vocalist Aaron Marcellus) and live music performances (including drumming by Michelle Dorrance and Nicholas Van Young, bass and guitar playing by Gregory Richardson, and piano work by Donovan Dorrance).
Quite a bit has been made of ETM: Double Down making use of something called "electronic tap boards", which Nicholas Van Young has likened to electronic drum triggers operated by the dancers' feet.  These devices feature prominently in the work right from the get go but, if truth be told, I think I was far more impressed by the sounds the tap dancers made when there was nothing between their shoes and the stage floor -- and I think that the greater floor space also allowed them more freedom of movement and, accordingly, expression too.

While many of the dances come across as abstract, one particular section can be easily read as being about two male lovers and the times when they don't get along as well as those others when they're very much in synch.  And although there may not have been a specific message imparted by his doing so, I really enjoyed seeing how lean and lanky Warren Craft -- who must be the rare tap dancer who's also trained in ballet -- appeared to utilize his whole body (including his shoulders) to maximize the volume of his tapping!
Their costumes may have been on the utilitarian and gray side but this dance company's performance was anything but!  While the tap dancing of Fred Astaire and Ginger Rogers often looked like a more percussive version of ballroom dancing, Dorrance Dance's version shows very clearly that it was -- as Michelle Dorrance said in her Artist Statement -- America's first street dance, and is a colorful dance form that can be totally in tune with the contemporary world. :)
Posted by YTSL at 11:57 PM