The Mari-Cha Lion in Hong Kong 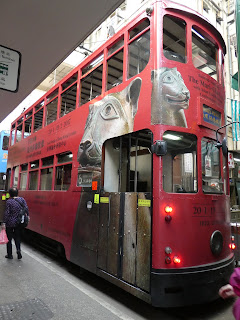 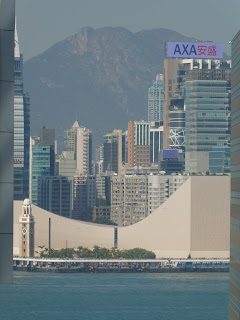 A view from the Asia Society's roof garden that takes in
Lion Rock as well as the Hong Kong Cultural Centre
Say the word "lion" in Hong Kong and the word "rock" tends to come to mind since to many people, since Lion Rock is the territory's most iconic Kowloon hill, and the one that the "can do" spirit that Hong Kongers (have) possessed for decades has been named after.  But this past month has since another prominent lion temporarily take up residence in town -- on the Hong Kong Island side of Victoria Harbour, over at the Asia Society Hong Kong Center in Admiralty.
The mysterious Mari-Cha Lion was originally thought to date from Spain but recent research undertaken on this large leonine sculpture leans towards it having been cast in the mid-11th to -12 century in a region of southern Italy ruled at the time by the Normans.  Decorated with Arabic engravings by its Spanish Muslim creators, this rare beast is further rendered unusual by the presence inside it of a vase-shaped vessel, made of the same type of bronze as the rest of the figure and thought to be the mechanism that made it an "acoustic automata" which could roar like a living lion!
As amazing as this precious work of art is though, it can't be the sole subject of one whole show.  Rather, the Asia Society put up a selection of other leonine creations on display along with it for the Roaring Guardians: The Mari-Cha Lion with Asian Traditional and Contemporary Art exhibition which explores the religious, imperial and vernacular significance of the lion symbol in various parts of Asia, including India, Tibet, ancient China, contemporary Hong Kong, Vietnam, Singapore (whose Malay name of Singapura, more than incidentally, means "lion city") and Japan.
Running the gamut from contemporary art works to artefacts considerably more ancient than the medieval Mari-Cha Lion itself, I personally found some of the most impressive to be the small but oh so detailed copper alloy figurines from India of Vishnu (the Hindu god of preservation, who takes the form of a lion in his Narasimha "man-lion" incarnation), Parvati (the Hindu goddess of fertility, love and devotion, whose Durga avatar has a leonine connection) and her husband Lord Shiva (the supreme being who creates, protects and transforms the universe for Hindus).  And while I must admit to generally placing greater value on the older items on display, I also found myself intrigued by the miniature "lion's masks" creations by Vietnamese artist Vu Dan Tan out of recycled sweets' boxes along with other mundane elements such as paper, ink and goauche.
While looking at those items in particular, I found myself wishing I had brought my reading glasses along to the Asia Society!  Alternatively, the curator in me thought, it really would have helped for them to have provided magnifying lenses or similarly low-tech but helpful devices along with the informative complimentary audio recordings supplied at the information desk.
Something else that the (occasional) museum consultant part of me found myself somewhat perplexed and irked by was how low a level many of the works and the text panels had been placed!  Curiosity actually ended up compelling me to enquire at the information desk if the exhibition's principal curators were on the short side.  Over the course of our discussion, the suggestion was made that the low height choice may have been made because the exhibition had been expected to attract many school parties.  But if this really had been the case, surely steps could have been made (literally and metaphorically) to accomodate both regular sized adults as well as children?
Still, the above-mentioned exhibition design gripes aside, I actually did feel the exhibition was one I'm glad to have catch here in Hong Kong.  I'd even go so far as to say that the sight of the extraordinary Mari-Cha Lion alone was worth the price of admission, except that it'd be faint praise in this case since no entrance fees were charged for this pretty interesting exhibition! ;b
Posted by YTSL at 7:52 PM

Have to say your tram and I would call double decker looks interesting.
Coffee is on

You can call it a doubledecker tram -- and not only is the vehicle itself interesting but the rides you can go on it too! ;)