The siren call of Hong Kong's outdoors melts away fears, and is hard to resist! (Photo-essay)

Earlier this week, it was reported that a mother and daughter duo had been robbed while out hiking in the Sai Kung area, and that the week before, a woman had been robbed while she was out on the Eagle's Nest Nature Trail in Lion's Rock Country Park.  But rather than feel that I should think twice from now onwards about venturing into the Hong Kong countryside with just one female hiking buddy or on my own, I tend towards the view that muggings are so rare in Hong Kong -- in urban as well as rural areas -- and so much of the territory is so very scenic that, especially on a beautiful weather day, it's just so very hard to resist the siren call of the Hong Kong wild!

Actually, one of my hiker friends told me about her and another woman having been mugged while up at the top of Mount Butler some years back (when the likelihood of "illegal immigrants"/Putonghua speaking criminals preying on hikers seemed to be at their peak).  So I know that things like this are not impossible.  Still, I must admit that I've generally had a greater fear of falling down hills and from the side of a narrow mountain path as well as being bitten by a poisonous snake or stung by hornets while out in the wilds of Hong Kong than being robbed by a fellow human.

Maybe I've been lulled into a false sense of security since I imagine that I don't look like the kind of person a potential mugger would target (in that I don't wear fashionable and expensive-looking gear, and have a stick with me when I go hiking).  I also reckon that I tend to be more aware of my surroundings than some others (particularly those fitness fanatics who seem super focused on their heart rates and not much else).  In any case, especially after looking at the following photos, can you blame me for wanting to venture out into the Hong Kong countryside?  And for the record: yes, I was with just one female friend on the hike where I took these snaps! ;S 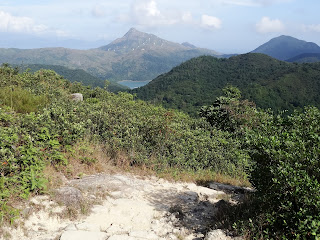 A glorious view that people who have gone up the first bit of
Section 3 of the Maclehose Trail will be familiar with :b 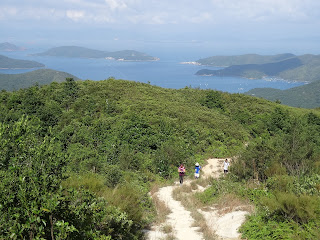 I, for one, can't resist turning back every once in a while
to look at the views that get revealed the higher up the trail I go :) 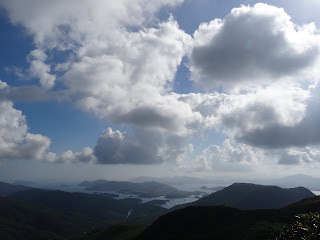 That afternoon's clouds were quite something too! 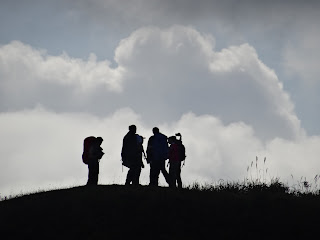 The top of the hill's a pretty cool spot
to take a selfie/group photo ;) 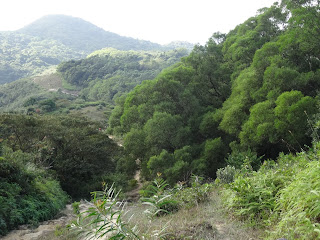 But rather than pause up on that hill, my friend and I opted
to keep on following the path that led us higher up still! 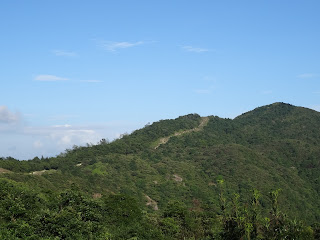 Even while we still had a ways to go before the hike's end,
one can get a sense of accomplishment when looking back at
a scene like that and know that one's already gone along it :) Views like this get me thinking that this part of the
Maclehose Trail may well be one of my favorite
sections of trail in all of Hong Kong :) 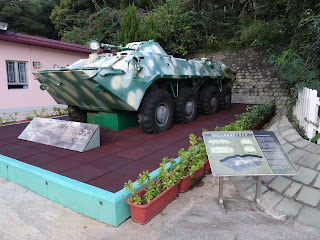 Rather than follow Section 3 of the Maclehose Trail to its end,
we opted to end our hike at Lady Maclehose Holiday Village
(where this armored personnel carrier can be found on display!)
Posted by YTSL at 11:59 PM

I been getting out a little and taking short walks.
Coffee is on

I remember a bit more than a decade ago, there were robbers lurking in the Tai Tam Country Park. They take away belongings of their victims and then have them tied up onto tree trunks.

I vaguely remember it happened a few times. I'm unable to recall if the culprits were ever caught.

Look's like all we could do while we are out there is to stay alert and try to pay attention of your surroundings at all times.

Good for you and hope you've been enjoying them!

My sense is that in the past, the robbers didn't work alone. But the most recent cases sound like they involve just one man (and maybe the same one at that) robbing the women. I wonder what he's threatened the women with. There doesn't seem to have been mention of a gun or such!

I seemed to have read something the about recent mother\daughter incident that one of the robbers has a meat cleaver. That was one weapon even well-trained personnel would not take it lightly.

I know a meat cleaver's no joke but I wonder even if a robber had that weapon whether he would go for someone with a hiking stick, or just wait for people (women) with no obvious items that they could use as a weapon... In any case, I of course hope that I never meet up with a robber in Hong Kong, while hiking or just anywhere really!

It was in the news. The Police had caught someone that might have something to do with previous cases, both in Eagle's Nest Trial as well as the Sai Kung one. The news mentioned this man had been caught a few years ago and was sentenced to prison for a few years after trial. He was out a few months ago and was deported back to China. But it seemed he come again illegally as there was no entry records.

And us tax payers had been paying for his previous stay，and would probably have to pay for his next.

Guess the authorities'll have to try rehabilitating him once more since they failed so miserably the previous time! And it'd, of course, be good and helpful if the border control police and such did a better job. On a more positive note: sounds like hikers can breathe easier for a time, for now.