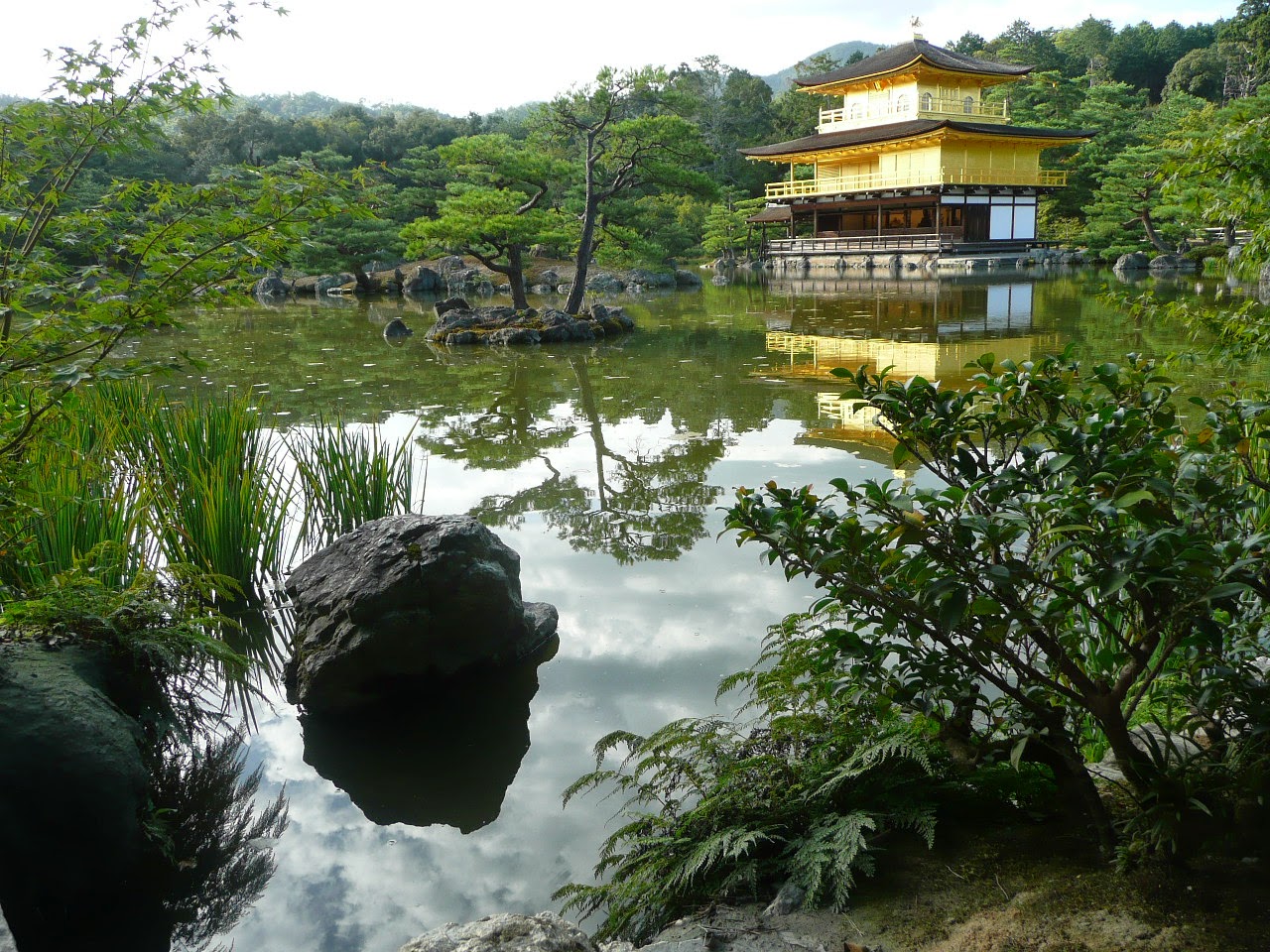 The fictionalized version of Kinkakuji appears in
Kon Ichikawa's Conflagration


Although I have a copy of Mishima's book in my collection, I have to confess to not having yet gotten to read it.  Perhaps I'd like the book better when I read it.  In any event, going into the screening of Conflagration knowing the bare facts rather than major story details may have allowed me to more greatly appreciate this drama whose protagonist is a novice monk with a stutter but is named Goichi Mizoguchi (rather than Hayashi Yoken, as was the case with the real life arsonist) -- and whose fabled temple is known as Shukaku in the film (rather than Kinkakuji or Rokuon-ji (trans. Deer Garden Temple), the latter of which is the temple's official name).


Conflagration's protagonist is the person that some people'll look down upon and others feel sorry for.  The only son of a consumptive priest of a minor temple in an out of the way village, Goichi (Raizo Ichikawa) had the misfortune not only to have his beloved father die prematurely but also to find out -- along with his father -- that his mother (Tanie Kitayabashi) was having sex with his uncle.  Already socially awkward on account of his having a stammer, these events further make the young man withdraw further into a shell that few people can crack.


After arriving at the fabled Shukaku in Kyoto, which his father loved, and where an erstwhile classmate is now head priest (Ganjiro Nakamura), Goichi does befriend another young apprentice monk.  Fate cruelly intervenes once more, however, when his friend is first called back home because his mother was dying and then dies in an accident himself!  And Goichi's life is further put into a downward tailspin when his hated mother is also taken in at Shukaku and the young man makes the mistake of seeking the friendship of a man with a crippled leg and twisted mind (Tatsuya Nakadai).
Something else that is made clear in Conflagration is that Goichi is one of those people who veneration of what they consider spiritual pure can make them unable to deal with the real world and its people being imperfect, sometimes even fundamentally flawed.  Insanity will result if you believe in the existence of perfection, Ichikawa seems to be telling the audience; and this all the more so in times and places when change comes suddenly and dramatically -- as was the case in Japan in the 1940s, a decade that saw Japan go to war and come out defeated and having to adapt (to) what had hitherto been foreign ways.


Although Goichi clearly is shown going along the path to madness, I have to admit to feeling moved by his character.  One reason is because he did genuinely want to do good for a time.  Another is that he was an underdog in so many ways that it seemed like he was unfairly doomed pretty much from the start.  If nothing else, those of us who have at some point in life felt like the gods were against us surely will emphatize and sympathize with at least some of this young's man burdened lot, even if we never ever would carry out as dramatic an action as his with regards to that which he had venerated but then also came to serve as a symbol of much that was wrong with the world!

Conflagration sounds like an interesting movie. I've read Mishima's The Temple of the Golden Pavilion and seen Paul Schrader's film Mishima: A Life in Four Chapters which has a short reenactment of the novel. Is the photo of the Pavilion yours?

"Conflagration" is indeed an interesting movie. Another one that may interest you -- this one about Yukio Mishima -- is "11:25: The Day He Chose His Own Fate".

And yes, that photo of the Golden Pavilion is mine -- one of several I took when visiting Kinkakuji in September 2013. :)