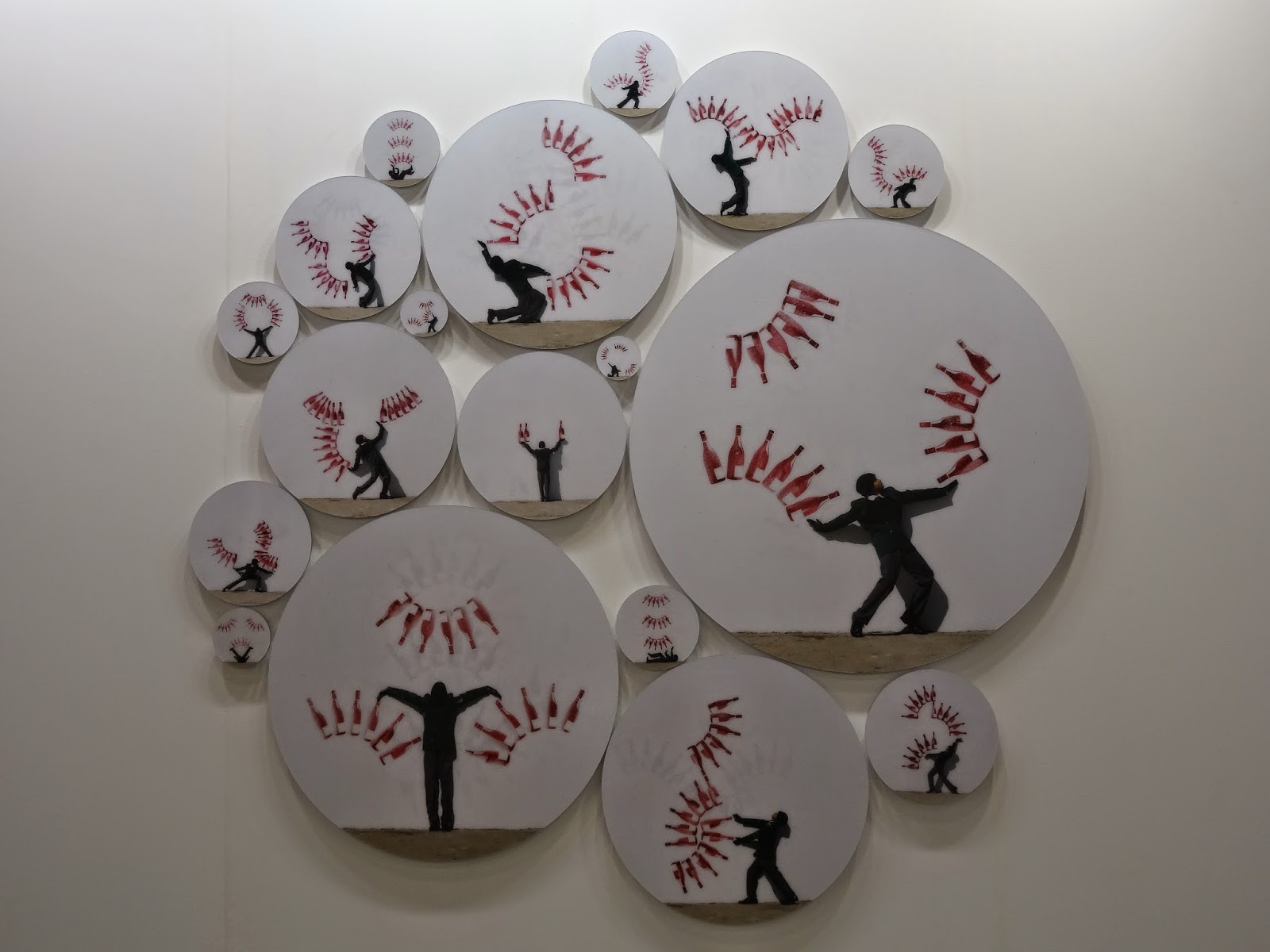 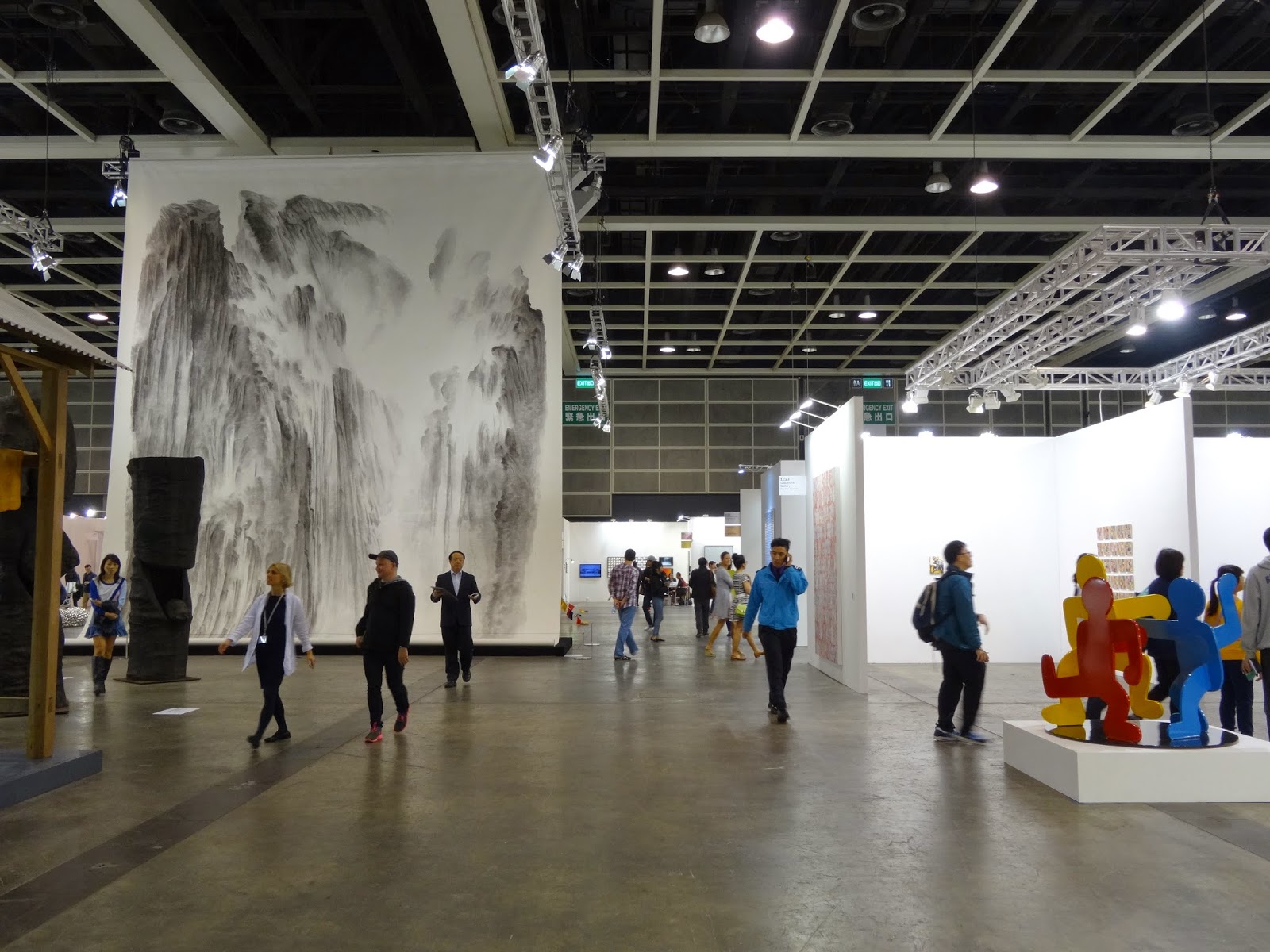 East and west mix at this mega art fair of works by over 3,000 artists
whose exhibitors comprise 233 galleries from 37 countries and territories 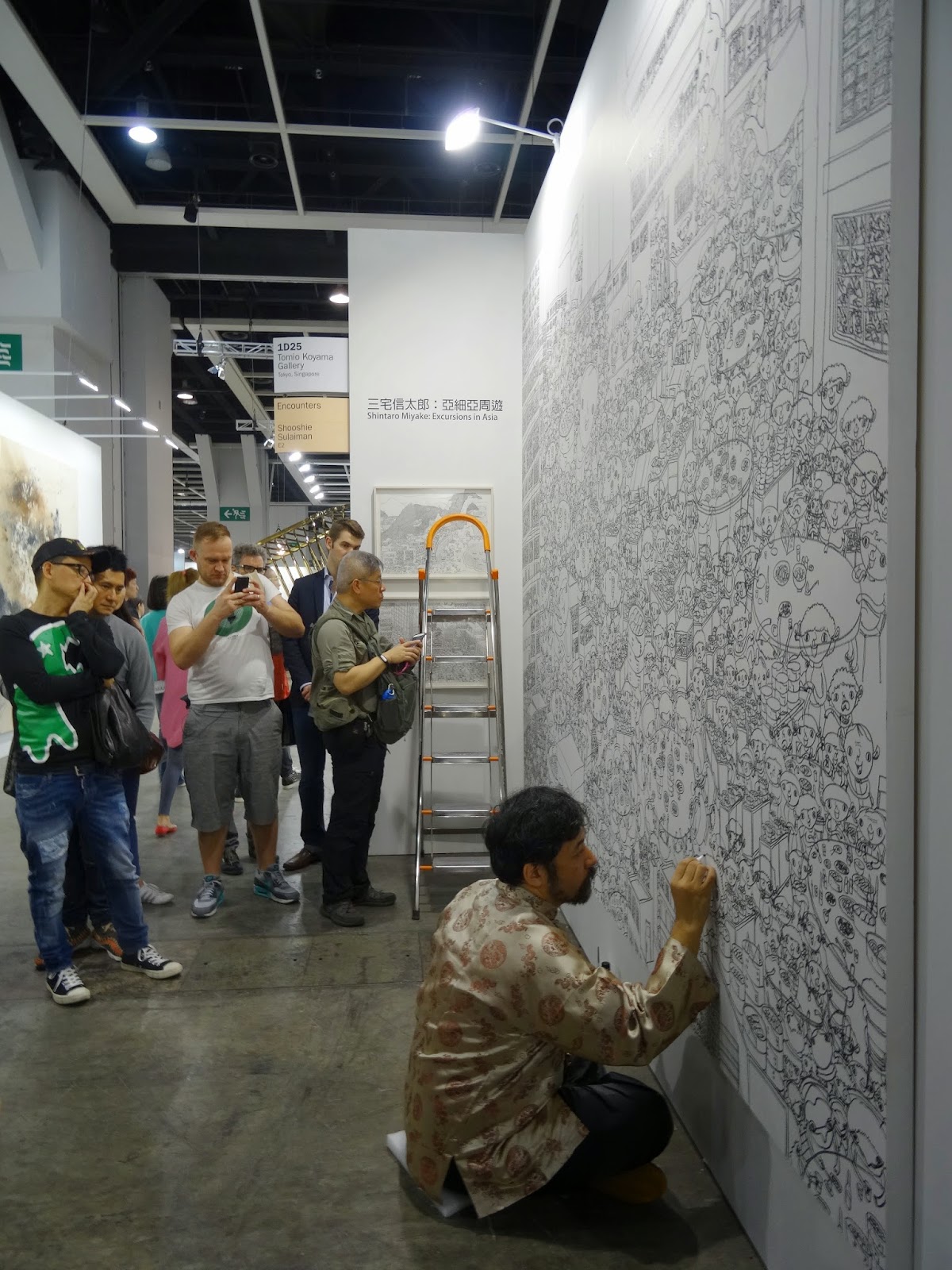 At least one artist (Shintaro Miyake) was creating art
at the art fair rather than just have his work on display there! 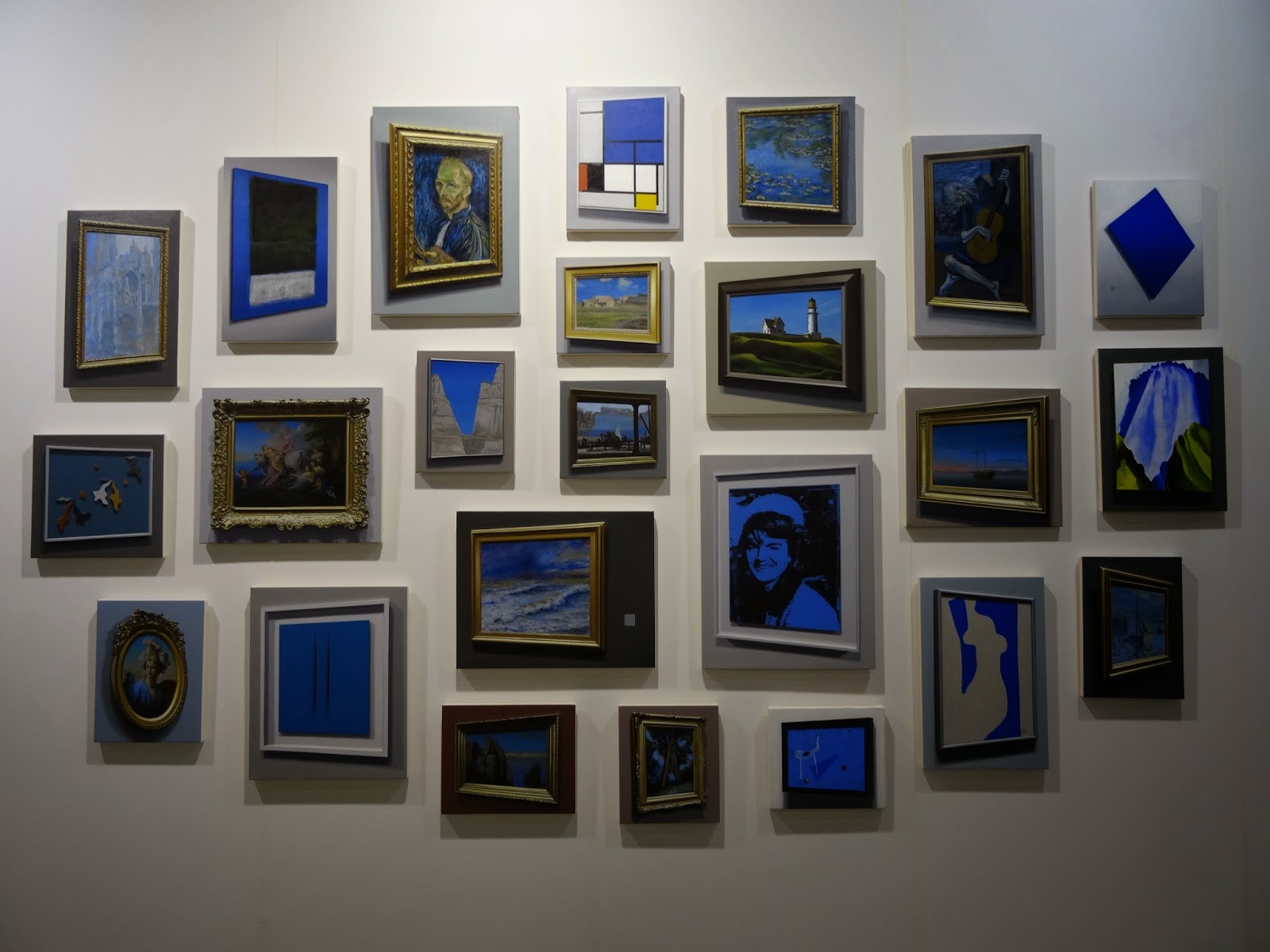 David Klamen's untitled blue meta-painting installation
was, like Rhode's Balthazar, a work consisting of multiple
images and components that I found interesting and impressive

Still, there's little doubt that as Art Basel - Hong Kong -- as it has been known since 2013 -- Hong Kong's premier international art fair has become a major fixture in Hong Kong culture vultures' calendars.  And while there's no question that its major reason to exist is commercial (i.e., to find buyers for the works of art on display at the fair), it's also true enough that this art fair also represents the best chance each year to view a super large as well as diverse selection of art works under one roof in Hong Kong.

Earlier today, I spent three hours at the Hong Kong Convention and Exhibition Centre that once more is where Art Basel - Hong Kong takes place.  With so much there to see, I once again, as with previous years, adopted a strategy of walking through as much of the exhibit space as I could and only stopping when something that I considered really extra-ordinary caught my eye -- and in a pleasurable, not just attention-demanding or plain shocking way.  (It used to be assumed that art was beautiful, or at least meaningful, but I often think that more and more, artists just aim to "weird" one into noticing their products, or do so by producing "loud" -- as in super bright or large -- works!)

Walking by hundreds, if not thousands, of works fairly quickly, I found it notable that certain artists really do have such a distinct style that their works -- whether one loves them or not -- are pretty much instantly recognizable as theirs.  (I think here of the contemporary likes of Damien Hirst, Yayoi Kusama, Julian Opie and Takashi Murakami as well as now deceased iconic artists like Roy Lichtenstein, Fernand Leger, Marc Chagall and Zao Wou-ki -- all of whom have works on display (and sale) at this year's art fair.)

But while I'm sure the galleries representing them would beg to differ, I felt that a lot of the works that I saw -- or at least glanced at -- at the art fair really weren't that striking, or even all that special.  Still, of course, there were exceptions -- as in works of art that I did think were exceptional.  Thanks to the relaxed photography rules at the art fair, I was able to snap shots of several of these -- and share a few of the images at the top of this blog post.

Because of my finding enough works of art on show that I consider admirable, I consider the time I spent at this year's Art Basel - Hong Kong to be time well spent; and I have to say that it's made me rue my having missed last year's edition (due to my being away from Hong Kong when it took place).

One final note (at least for now!): Perhaps because I skipped a year, I feel like I've noticed more this time around the lack of noteworthy works from Hong Kong artists at this art fair which may have internationalised at Hong Kong's expense -- or is it because I saw so many more interesting -- and heartfelt and meaningful -- local works on the streets of Hong Kong during that period of time when certain sections of Admiralty, Causeway Bay and Mongkok were Occupied?
Posted by YTSL at 11:44 PM

Glad you posted this photo-essay. I like the second photo from the top of the artwork on the left. I had seen this particular artwork on an online source and it really stood out from the others...You sound as if you stopped to look at only certain works, rather than examining every one...That's how I feel about contemporary art, you have to be selective.

For those of us who spend time studying art of the past, much contemporary art just isn't as interesting. (For instance, I've spent years studying the work of 20th century German artist, Max Ernst...Some of the women he was involved with, Leonora Carrington, and the artist he would later marry, Dorothea Tanning - were also interesting artists). Will today's art stand up to scrutiny in the years ahead?

The painting you like in the second photo from the top is Xu Longsen's "Beholding the Mountain with Awe No. 1". And it was indeed one of the works that caught my eye and got me pausing in front of to admire for a time.

Many other works at the fair I really didn't think were worth much of my time. And yes, I do think that contemporary art can be hit or miss.

Max Ernst... so you're into Dadaism and Surrealism! My artistic tastes are more conservative than yours -- I like the late 18th through to 19th century British best, but also have time for many other 19th century artists from elsewhere, including France, Germany and the US... ;)

I would like to clarify something about my initial comment. You say your artistic tastes are more "conservative" and that you like "late 18th century through to 19th century best." Well, I also admire the art produced in this period. In fact, emotionally I'm closest to Romanticism than anything else.

In the case of Max Ernst, in some of his works art historians place him as the modern inheritor of romantic German forest painters. His art goes deeper than someone like Dali, who was also part of the Surrealist movement. The artist who most haunted Ernst was probably Caspar David Friedrich, a 19th century Romantic artist.

I frequently make a connection between Romantic painting and photography. As an example, I don't have to look any further than this blog, at the photo of yourself in your profile. This photo depicts you as a small figure, with your back to the camera, making you appear as if you are just part of nature...Well, in my mind I make a connection between this photo and a famous painting by 19th century artist, Caspar David Friedrich. The painting is called "Monk by the Sea."

Oooh! Caspar David Friedrich was the German artist I had in mind when I wrote about my liking German as well as British, etc. 19th century art!

By the way, one of my best memories of being in Berlin (in 1989!) was visiting an art gallery where there were many of his works on display. :)

And wow re your making a connection between my profile photo and Friedrich's "Monk by the Sea"! :O