The scenic area that lies under the shadow of Devil's Peak 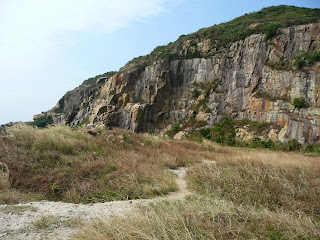 Up until today, I had never set foot in this
scenic part of Hong Kong 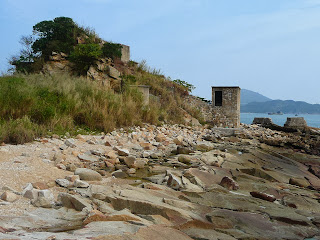 Once there, the shutterbug part of me
couldn't help but go a little crazy! 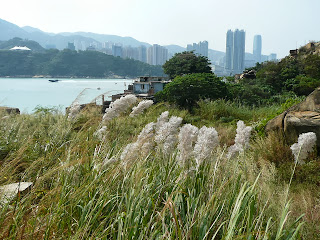 Earlier today, I hiked up Devil's Peak for the third time ever.  As well, I followed the path that leads one down to Lei Yue Mun, ending near its Tin Hau Temple.  On my first visit to Lei Yue Mun, I also had checked out that temple and also the section of beach with interesting shaped rocks.   But until today, I hadn't ventured far beyond that area.

After my hiking friend expressed an interest in checking out what he thought were ruined buildings to the east of Lei Yue Mun's Tin Hau Temple, we decided to do a bit more exploration of that area.  This involved finding our way along narrow lanes to go through what appeared to be a squatter village located at the water's edge and under the shadow of Devil's Peak.

The squatter village itself was an interesting place -- the kind that looks like it belongs to another era of Hong Kong history -- but the real bonus came from discovering that the more or less vacant land on the eastern side of the village really is extremely scenic, and varied too -- in that its landscape includes ruined buildings, a beach area where we saw people fishing and at least one person looking to collect oysters from the rocks, a cliff edge with multicolored rocks, and a meadow of sorts where grew some weeds that actually were pretty beautiful!
While we weren't ever completely alone while in that area (which appears equally attractive to fishing enthusiasts, hikers and fairly wild/neighborhood dogs), it was rather amazing how the place felt so off the beaten path -- not least on account of its looking like it hasn't been built on for decades.
Adding to the wonder of it all is that it doesn't appear to have been mapped out in detail on either the relevant official country or urban map of the area -- and I'd wager that very few people indeed know if its existence, never mind have been to that section of Hong Kong which really isn't all that far away from majorly built up areas like Heng Fa Chuen (across Victoria Harbour) and Yau Tong (which, like it, is over on Kowloon-side).
Posted by YTSL at 10:00 PM

That location used to be a quarry about two hundred years ago. There should still be traces of it if you look carefully.

Thanks for the information. And yes, now that you've mentioned it, I definitely can see traces of the quarry that that part of Hong Kong used to be! :)

Good photos and text of an area I wasn't familiar with. Supplemented by YouTube videos I subsequently watched of Devil's Peak, this entire area looks interesting. Now, I will have to seek out some history of this area.