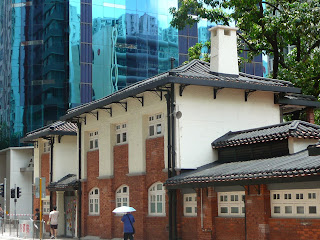 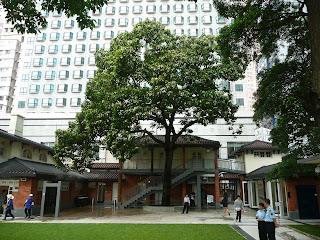 A few months ago, the Grade II historic building
was opened to the public as an art space named Oi! 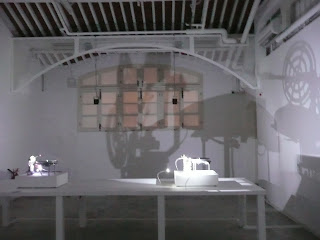 Upon returning to visit recently, a friend of mine who had moved back to Toronto a couple of years back remarked on how Hong Kong's physically landscape look to have changed more in just two years than Toronto had in about ten years.  While I can't say much about the pace of change in Canada's largest city, I'd agree that Hong Kong is a place where it can often seem like there's more change than continuity -- and a place where far more buildings get torn down and radically renovated as well as built than carefully conserved or preserved.
Consequently, when I saw what appeared to be some building work going on at 12 Oil Street earlier this year, I worried that the building whose architectural style reminded me of some at my old school in England would soon be no more.  So imagine my delight upon my discovering some time later that not only was it not torn down but that the arts and crafts architectural style building now was open to the public as the Oi! art space!
Earlier today, I checked out a second exhibition at Oi!  If truth be told, I found the inaugural exhibition more impressive.  Continuing with the truth telling: I actually was more impressed by the building -- which was originally home to the Royal Hong Kong Yacht Club (that's kept the "Royal" part of its title but moved its headquarters to Causeway Bay -- and its grounds than any of the contemporary artwork that has been displayed at this art space that appears to have been set aside to showcase the work of the younger and more experimental members of the Hong Kong artistic community.
As much as I'm happy to see the building still in existence and now open to the public, I really hope that it won't be(come) a white elephant any time soon.  This would be terrible in Hong Kong, where good buildings are scarcer than one would like -- and quite a few people would love to be given an excuse to tear down (or at least drastically "renovate") a nice old building in order to make "more efficient" use of its land and such.
Posted by YTSL at 10:23 PM

I first read about Oi! at hongkongextras.com and I'm glad you made a post on it. Not only is this building saved from destruction, but experimental artists are putting the space to creative use. Just look at last week's art news: a painting by British artist Francis Bacon is auctioned for the grossly inflated sum of over 142 million U.S. dollars!

That is why the less commercialized art space of Oi! is such refreshing news. Surprisingly, Jason Wordie doesn't include the Royal HK Yacht Club building in his book. However, he does include the Sunbeam Theatre.

For anyone even lightly interested in history, anywhere near North Point will recall the 1967 Hong Kong Riots. This Hong Kong film fan (if memory serves him correct) recalls brief newsreel footage of those riots in John Woo's Bullet in the Head
and Wong Kar Wai's 2046.

You've got more knowledge and appreciation of Fortress Hill/North Point than many Hong Kong residents!

Re North Point and the 1967 Hong Kong Riots: a friend and I were walking along King's Road when he pointed out the Metropole Building and talked about how the British had landed a helicopter on its roof during the riots...

And since you're a Hong Kong movie fan, you'd be able to recognize sections of North Point that appear in "Beast Stalker" and "Accident", should you ever visit the area... Also, the Sunbeam appeared in "Hu-Du-Men"... :b

Since you mentioned Hu-Du-Men, I searched for it on dvd, but it seems to be out of print. I did watch a clip of it on YouTube. I wasn't familiar with the term, Hu-Du-Men, but I am now, which only further adds to my fascination with the roots of HK cinema in Chinese opera...I guess Peking Opera Blues would be one of the prime examples of this...I would also include the hilarious backstage antics in the first part of Sammo Hung's Prodigal Son, which you rated a 9 in a previous review. Bey Logan, in his book HK Action Cinema, rated Prodigal Son as the finest martial arts move ever made. Well, I guess that's subjective.

Well, getting beyond this verbosity, what I really wanted to comment on is the star of Hu-Du-Men, Josephine Siao. I wasn't familiar with any of her pre-Fong Sai Yuk work, until I watched some posts on YouTube. I was surprised at what a versatile actress-entertainer she is...It warms my Buddhist heart to also read that this educated compassionate woman started a foundation for abused children in Hong Kong.

Also, FYI, a few years back when Donal Tsang was still Chief Executive of Hong Kong, there was a poll of which public personalities one rated highest, etc. Josephine Siao topped the list while Donald Tsang was second from the bottom, with the person at the very bottom being... Jackie Chan.