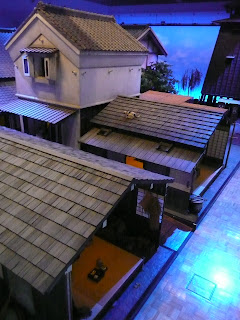 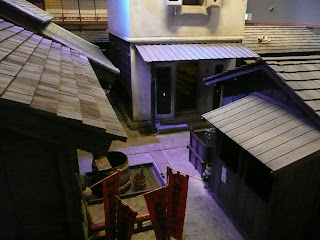 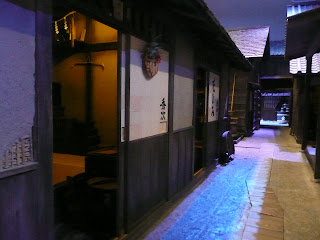 As some of you may know, I'm a museophile with experience working in museums in the US, Britain, Malaysia and Tanzania. So it's only natural that when on vacation, I visit my share of museums -- with my recent visit to Japan involving not only a visit to the Edo-Tokyo Open-Air Architectural Museum in Koganei but also, a day later, the Fukagawa Edo Museum in eastern Tokyo.

A small community museum, the Fukagawa Edo Museum's main attraction is a life-size reproduction of a 19th century riverside neighborhood in Edo (the name for the city that was renamed Tokyo -- which means "Eastern Capital" in Japanese -- upon its becoming the imperial capital in 1868). But while the modest wooden buildings that are part of the walk-through exhibit are entirely traditional looking, the techniques to enhance the overall exhibition most certainly are not -- and, in fact, could be said to be state-of-the-art (not least because the museum had closed to the public in 2009-2010 for one year of renovations) as well as innovative.

Among other things, this public museum's exhibit designers have taken the trouble to put in small touches to enhance the overall atmosphere like a cat on a roof (visible in a couple of the photos in this Photo Hunt entry -- see it?) and birds sitting pretty atop an archway. Even more spectacularly, this installation comes complete with sound equipment that intermittently broadcasts sounds of daily life in 19th century Edo -- such as a vendor hawking his wares along with birdsong and a dog's barking -- and lighting that mimics the passing of the seasons along with a 24 hour day and night cycle!

As my photos show, I visited during what appears to have been the late night/early morning part of the cycle -- when the overall place was tinged with nocturnal blues. And although a part of me was tempted to wait to see the exhibition in brighter light, the truth of the matter is that this wasn't a museum that could keep me within it for more than an hour.

Thanks to the museum itself being located in a charming looking neighborhood of Tokyo that's a mix of residential, small shops and a smattering of public attractions (including Kiyosumi Teien as well as the Fukagawa Edo Museum) though, the trip out there to it did feel worth the time and effort. And, indeed, I did end up spending some time walking around the area and enjoying sights not only at Kiyosumi Teien (where I ended up spending more time than at the museum) but, also, such passing ones as a sumo wrestler (recognizable by his oiled hair and topknot) out walking his dog along with mothers ferrying their small children about on their mamachari and schoolchildren spiritedly exercising in a nearby park. :)

very cool. i enjoy all your posts

I want to visit it and experience it for myself. Can I have the address?

That looks like a fascinating museum and one that I would love to explore. great photos.

You always have the most interesting posts. Have a lovely weekend.

Thanks, glad you're checking out my posts. :)

It's an interesting little museum but, to be honest, I prefer the Edo-Tokyo Architectural Open Air Museum I visited the previous day (and which was the focus of my most recent photo-essay).

Your photos make it look very attractive. I love the idea of spotting a Sumo wrestler walking his dog - please tell me it was a small and wooly dog!

Hi YTSL, It does seem like a movie set with the added details and and sound effectss. Your observations of the sumo wresterler and "mama chariots" (enjoyed that link)...

Thanks so much for the interesting read and sharing your photos and your recent travel experiences in Japan.

I love visiting museums too :)

What a fascinating museum. Great take on the theme. I hope you have a happy weekend.

I love visiting museums too. It's so interesting and often very peaceful in there too.For me it's a little far to visit your museum, lol !

I wish I could oblige but, sorry, the sumo wrestler was walking a fairly big dog -- albeit one that looked friendly more than fierce. ;b

Thanks for reading as well as looking at my Japan (as well as Hong Kong) posts. :)

Ah well re your being too far to visit the museum in question. And you can definitely consider yourself fortunate that you live on a continent with so many great museums. :)

Even though it doesn't sound like a museum to linger all day in it certainly looks interesting! Have a great wekend

To me I found it interesting. Because it didn't look like an museums.

My feeling about the museum: Worth a visit -- though only worth going all the way there when coupled with everything else in the area. :)

It's definitely not a conventional museum -- and yes, I like museums that try to be different. :)

Interesting and educational, as always. Nice pics too!

Thanks for visiting, looking and reading once again. :)

I love history and enjoy museums.. great shots.. Thanks for stopping by my blog.. Have a great day!
Patsy

Sounds like an interesting place. I'd love to go to Japan.

Yay, seems like quite a few museophiles among us Photo Hunters! :)

So much of Japan is very interesting. A great place to visit. :)