Going to a baseball game in Japan 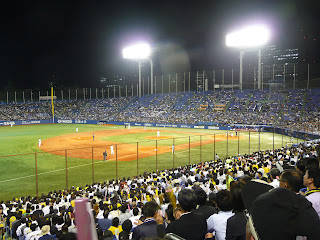 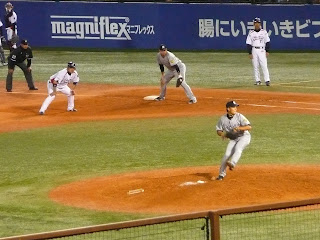 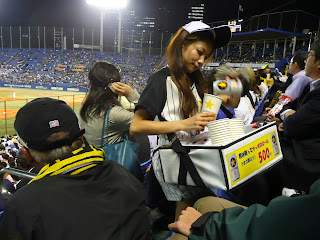 In the stands, the beer girls (and boys) also
are frequently called to action 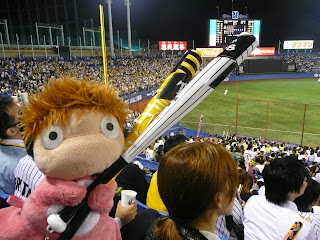 Puppet Ponyo in the crowd and gamely clutching
two baseball bats (that actually are more for
making lots of noise than batting any balls) ;b
Before I left for Japan three Saturdays ago now, I e-mailed a friend living in Tokyo to arrange to meet. Since we share a fondness for beer and izakayas, I knew we'd be meeting up for drinks and more at those Japanese establishments I tend to think of as Japanese cousins of British pubs and Spanish tapas bars. But over the course of our e-mail correspondence, she also managed to convince me that an evening watching Japanese baseball would also make for a good time and an interesting cultural experience.

Thus it was that I -- whose first sport of choice is association football rather than anything else -- found myself at the open air Meiji Jingu Stadium one beautiful evening taking in a game between the Tokyo Yakult Swallows and the team she supports, the Hanshin Tigers, with her and a group of her Japan-based friends.

Sitting in the Hanshin Tigers fans' section of the stadium, the neutrals among us got into the spirit of things and became Hanshin Tigers fans for at least a night. Because even though the team playing away from home may have been second best on the field that night, their fans amply and admirably demonstrated that their enthusiasm and loyalty were second to none -- that is, when their attention wasn't being diverted towards procuring and downing the plentiful beer on sale in the stadium and munching assorted snacks including edamame and takoyaki along with popcorn!!

Although I happily amused myself watching the crowd and talking with my friend and her friends during some of the time that I was in the stadium, I actually found myself more interested and involved in watching the game than I thought I would be. One major factor was that the overall atmosphere was far more spirited than at the one previous baseball game I had watched live -- decades ago at a game in Beloit, Wisconsin, involving the Beloit Brewers (the Milwaukee Brewers' farm team). Another factor probably was that, even if it did not approached American major league level, the game quality still was higher than than that of the American minor leagues.

All in all, Puppet Ponyo -- who was happy to pose with Hanshin Tigers fan paraphernalia but most definitely was not about to try catching any stray balls that got hit our way, despite my friend's urgings -- and I had a pretty fine time at the ballgame. So much so that we can definitely see why the Frommer's Guide has attending a baseball game second on its The Best of Modern Japan list and would agree that "Watching a game with a stadium full of avid [Japanese] fans can be quite fun and can shed new light on America's favorite pastime." :b

Lovely post. Edamame must be a perfect ballpark snack, unusual though it might sound to western fans.

The picture that caught the pitcher pushing off the mound with the first baseman, base runner and coach in the background is framed perfectly and taken at just the right time.

I hope Ponyo wasn't didn't get cranky from being up past her bedtime but she certainly got into the spirit of things.

Like ewaffle I think the second photo captures so much and suggests lots of movement (something baseball isn't noted for).

Glad to see Ponyo enjoyed herself and got into the cheering.

M and I followed the Braves when she was in high school. Our cable television showed all their games so we watched them rather than a closer team.

Re Puppet Ponyo: I'm not sure when's her bedtime. She always seems awake whenever I look at her -- at least her eyes are always open and very big! ;b

I'm happy myself at how the second photo turned out -- considering I used maximum zoom for taking it. :)

As for you and M: The Braves rather than a nearby team? Guess you guys were always rebels! ;b

Thanks so much for the address of the museum. I'm planning a visit to Tokyo and am searching for interesting places to visit during my short stay. :)

My son was on a Youth Exchange program a few years back and his Japanese homestay family brought him to a baseball game. He brought back a lot of souvenirs and photos from that visit.

He didn't develop a love for the game as it is not commonly seen in Singapore. :)

Keep on checking out this blog for interesting places to visit when you visit Tokyo! :b

Re baseball: Purists will scream but think of it as a larger scale version (complete with two handed -- rather than one handed -- bat) of rounders... ;)

Yeah what's a trip to Japan without a baseball game eh?

I've been to Japan many times before but this was the first trip during which I watched a baseball game. So... do you go to a baseball game every time you visit Japan (when the baseball season's on)?! :O