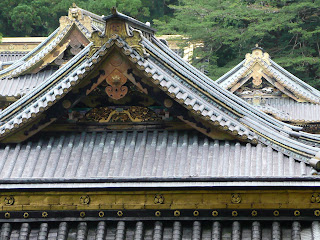 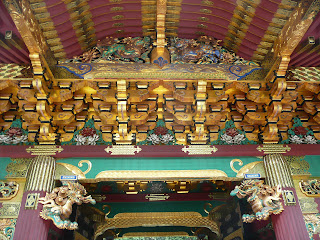 On the second full day of my recent Japan trip, I woke up early to beat the Tokyo rush hour commuter traffic and headed some 140 kilometers north of the Japanese capital city to Nikko. A temple town located close to 1,300 meters above sea level, it is the final resting place of influential shoguns Tokugawa Ieyasu (1543-1616) and his grandson Tokugawa Iemitsu (1604-1651) -- who ordered the construction of Toshugu Shrine by some 15,000 artists and craftspeople -- as well home to such as the Buddhist Rinnoji Temple and Futarasan Shrine, which was founded by a Buddhist monk but dedicated to the kami (Shinto gods) of Nikko's three most sacred mountains.

After arriving at the town railway station, a bus took me closer to the part of Nikko where its four major holy sites are to be found within walking distance of one another. It was still morning when I embarked on what effectively was a pilgrimage of sorts -- albeit one that was more cultural heritage than truly religious in spirit -- but mid afternoon by the time I finished checking out the sacred area collectively known as Nikko Sannai (and realized that I had forgotten to have lunch but also be hungry -- so satiated was I visually and aesthetically by the sights there!).

Due in large part to its main Sanbutsu-doh Hall currently literally being under wraps while undergoing renovation, I was distinctly underwhelmed by the first and main section of Rinnoji Temple that I visited. In contrast, I got much more out of my visit to the serene feeling Taiyuin Mausoleum that actually is administered by -- and consequently considered, for organizational purposes part of -- Rinnoji Temple personnel but lies furthest north of the four major holy sites in Nikko Sannai and consequently is the least visited.

Like many other visitors to Nikko, I devoted the most time to touring around the expansive grounds of Toshogu Shrine where I didn't only just check out the likes of the Yomeimon Gate (that has more than more than 500 separate sculptural ornaments on it), the famous "see no evil, speak no evil, hear no evil" monkey trio, the celebrated "sleeping cat" and intriguing "crying dragon" but, also, climbed several extra flights of stairs up to the Okusha (Inner Shrine) where Tokugawa Ieyasu's tomb lies.

Although I was expecting from such as guidebook descriptions that the visit to Toshogu Shrine would be sensory overload-inducing, it turned out to be the case that I actually have seen far more colorful and elaborately decorated places -- including Bangkok's Wat Phra Kaew and (yes, really!) Penang's Khoo Kongsi's magnificent clanhouse. And I'm sure it didn't help that the day I visited Nikko (whose name means "sunlight") was the one day during my Japan trip that there were no blue skies to be seen -- and, also, that the autumn leaves had yet to appear to offer up a beautiful show.

On the bright (no pun intended!) side, however, this meant that I was ready and happy to press on to check other sacred sites in the area after visiting the -- don't get me wrong -- still pretty impressive overall monument that is Nikko's most important and famous sacred site. In addition, it helped as well that the neighboring Futarasan Shrine nicely served up a contrasting sight by virtue of it being as visually understated as Toshogu Shrine tends towards the aesthetically elaborate.

All in all, I'm glad that I went to Nikko. I'm also glad that I went when I did -- in that Nikko Sannai wasn't half as crowded as I was expecting it would be. Actually, as strange as it may sound, I was happy to have the company there that I did. For the truth of the matter is that I think that a Nikko Sannai empty of people would make me feel like I was intruding too deeply into the private realm of the supernatural as well as spiritual! ;b
Posted by YTSL at 10:42 PM

Ohhhh.... Nikko... Awesome place... I was there 2 years ago. Did you go up the mountain nearby to see the waterfall? I forget the name of that waterfall but I arrived too late at night to see it the last time I was in Nikko.

I'll be travelling to Japan again in November and will be trying to mobile blog again like my previous two visits. If you have time, come drop by my blog in Nov. Of course my posts on Japan are never quite as informative as your posts on everywhere you go. :) Arigatou... I always enjoy reading your blog. :)

Enjoyed reading about the sights in Nikko. Sounds like you had a great time. I admire how organized you are that you see so much in a day. I'm easily distracted and often only see a third of what I'd planned.

How many photos did you take this trip?

I'm glad you're enjoying the Japan blog posts -- not least there are quite a few more to come! :)

Alas, I didn't make it to the more nature-y surrounding area of Nikko. Would love to though and if I go again, it'd be to go to check out that waterfall (Kegon?) -- or even more than one waterfall.

And oooo, lucky you, re visiting Japan in November. Where are you planning to go within that country? Some place with lots of autumn foliage??

I had a good time in Nikko but felt a bit "shrined" out the day after! But two shrine-less days after, I was ready for Kamakura! ;b

Re the number of photos I took on the trip: I don't wanna count them all! How about if I say that I look to have averaged about 50 per day? ;O

This time most of the trip will be concentrated in Tokyo. I've been to Tokyo twice before but on both occasions, the time spent in Tokyo was always so short, I never felt that I actually truly saw all there was to see in Tokyo. Aside from going to a concert, I will also try to really explore Tokyo this time round.

This time, I will not only finally go to the Ghilbi Museum, I have also planned a trip to Tsukiji Market to eat at Sushi Dai like you recommended :) , go to Asakusa to the Sensoji temple and check out other anime centric places... I'm a bit of an otaku. :p

I am planning on going on a one day side trip. Kamakura was one of the options. I could do Hakone again since the last time I was there, we only saw part of Hakone. I was thinking of possibly doing Nikko because I really wanted to see that waterfall I missed the previous time. And yes, I think it is the Kegon Waterfall.

But I think in the end, I will most likely go to this place in Chiba... Nokogiriyama. I really want to go there and if my two other travel companions are willing... this will be our one day side trip and we'll be there in the right season too as it should be autumn colours all around. :)

I love Japan... I think I will try and go again next year. Am thinking of maybe making a trip to China too next year... really would like to go to Xi-an as well.

I know what you mean about having given Tokyo short shrift. I've been kind of the same. The thing is it's so tempting to venture further afield as there are so many alluring places that are doable as day trips from Tokyo.

The thing though with Tokyo is that it's so big/spread out that even going to places that are technically still part of Tokyo can feel like going to another town or city -- they're so different from central Tokyo, etc. E.g., Mitaka (which is where the Studio Ghibli Museum is) feels a world away from Shinjuku... but, then, so doe Asakusa! ;b

Re Nokogoriyama: Funny, you're the third person to mention it this week to me as a place they plan on visiting soon. I guess it must be *the* place to see autumn foliage in Japan. How far away is it from Tokyo (in terms of travel (presumably train) time)?

Nokogiriyama is about 1 1/2 hours from Tokyo via train. I've not actually done the plans up yet so am not sure of the exact time it'll take from Ikebukuro, the place I will be staying at this time. But I have pretty much decided that I would like to go there. There is a ropeway to the top of the mountain or it's a 2 hour plus walk up a stairway. I've seen several photos of it including some taken in autumn and the place looks amazing. My travel companions this time round are very easy going so I'm pretty sure I will have no trouble convincing them to go to Nokogiriyama over Hakone. :)

Okay, I'll watch out for your shots, etc. of Nokogiriyama in November over on your blog then! ;b