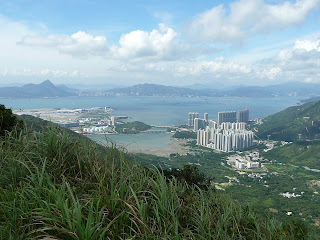 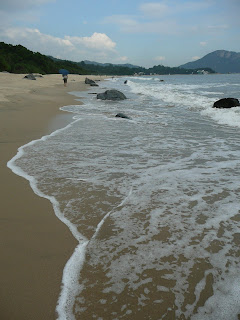 Best Beach: Although I was born and lived for many years on a tropical island, I actually didn't frequent beaches in Penang all that much when I was there. But each successive year that I live in Hong Kong, I find myself increasingly being attracted to beaches -- of which it really does have very many -- and being inclined to venture further and further to check out various beaches in the territory. And while Cheung Sha (Lower and Upper) may be among the furthest beaches from where I live in Hong Kong, it (as a collective) is one that I was happy to visit more than once in the summer of 2010 because, with its fine sands, lack of crowds and scenic surroundings, I really do consider it the best beach in Hong Kong -- and maybe in the region (especially based on what I've seen of beaches in neighboring Macau)!

Best Book: Unlike with movies, I don't make lists of the many books I've read each year (or over any period, for that matter). So it can actually be hard for me to remember when I read a book. Largely because I read it while on holiday in Germany though, I can recall that I read Nicholas Drayson's A Guide to Birds of East Africa -- A Novel in 2010. Furthermore, I know that I liked the book so much that it prompted me to seek out Alexander McCall Smith's The No. 1 Ladies' Detective Agency series after it was likened to them... and would attribute a new found interest and appreciation for spotting birds while out and about in Hong Kong to having read the good-hearted novel about a gentle soul of a Nairobi-based birdwatcher who turns out to be an even better man he appears!

Best Concert: Decades ago, I was forced by my mother to take ballet and piano lessons. Although I never developed a genuine appreciation of ballet, I have come to enjoy classical music -- so much so that I'd say that its my favorite kind of music and that the large number of classical music concerts I get to attend in Hong Kong is one of the great things about living here as far as I'm concerned. So it's somewhat ironic that my favorite of the concerts I attended in 2010 actually involves Latin rather than classical music. But the Cafe de los Maestros concert that was part of last year's bumper Hong Kong Arts Festival really was special -- and not just because so many of the incredibly talented musicians who demonstrably still have that special "it" were of an age that one would normally consider way past retirement and their prime! And the standing ovation they received confirmed to me that I was far from the only person in the audience who felt that way about the music and music makers that evening. :)

Best Encore Performance: I'm not sure if it's my imagination but on more than one occasion, I've felt that the best part of a concert has been the featured soloist's encore performance. And in 2010, two such performances stood out and way above everybody else's. One of these involved violinist Ning Feng playing Paganini's God Save the King at the Hong Kong Sinfonietta concert which he headlined. The other involved Dame Evelyn Glennie at the City Chamber Orchestra of Hong Kong concert at which she was the star attraction. If pushed to choose, however, I'd go with Dame Evelyn Glennie's performance as she blew me away with all the encore pieces she chose to play rather than just one of them -- even while I also will note that Ning Feng's bravura performance of the Paganini piece did leave me slack jawed with amazement!

Best Hike: One hot summer's day last year, my regular hiking companion and I went up to Ngong Ping in search of a hike that we could go on in that highland area that can be 10 degrees Celsius cooler than down at sea level on many a day. Having found not one but two good trails, we ended up hiking in that portion of Lantau Island on two consecutive Sundays. And while the first of these two hikes was interesting (because for much of our time up there, fog enveloped much of the area), the second turned out to be on a major gem of a trail that offers up stupendous views as it circles around Nei Lak Shan, Hong Kong's sixth highest hill -- including, from many angles, of both the Big Buddha and the Ngong Ping 360 cable car ride. Indeed, I'd go so far as to say that it's among the top five of the more than 80 hikes I've now been on the hiking paradise -- yes, really! -- that is Hong Kong!

Best Meal: Close to her birthday (though not on the exact day itself), my mother, a foodie friend, a good friend of hers visiting from France and I went and had the most expensive meal I've paid for here in Hong Kong. Sitting at the bar and opting for an omakase (chef's choice) at Sushi Kuu, I knew beforehand that dinner that night would be pricey -- but I didn't fully realise until I underwent the experience how decadently delicious as well as generally imaginative the food on offer would be. As a bonus, the atmosphere that evening was really excellent -- and no, that's not just the alcohol talking... as my mother didn't drink any of the copious amounts of sake that the others of us had that night and still professed to have enjoyed herself and that meal very much too! :)

Best Museum: Many, many years ago in Europe (more precisely, London's British Museum -- with its mummys, Rosetta Stone and so much more -- and child-friendly Science Museum), I started a love affair with museological establishments that continues to this day. And while I do think that Hong Kong has a number of museums that one shouldn't too easily sniff at, it was in Europe again that I came across my choice for top museum visited in 2010. Cologne's cumbersomely monikered Wallraf-Richartz-Museum and Fondation Corboud has a name that's hard to completely remember as well as say but my positive memories of its magnificent collection and top notch curation should stay in my mind for a very long time. An art museum that truly seems interested in helping one to learn more as well as appreciate the art it has put up on view, it really should serve as an example to the art museum world, some of whose representatives can seem too rarified for their own good.

Best Music Album: For the second year in a row, not only did I buy very few CDs over the year but my favorite music album purchased turns out to be an original movie soundtrack CD. In 2010, the album in question is the Ponyo on the Cliff by the Sea CD comprising music composed for the film by Joe Hisaishi. In view of this, I think people can more fully appreciate how very ecstatic I was to be able to attend the concert last year which had Joe Hisaishi conducting the Hong Kong Philharmonic Orchestra playing his compositions (including the Ponyo theme song) on top of two other concerts featuring the performance of the Ponyo theme song -- one of which featured the voice of Ponyo, Yuria Nara; the other had the Four Gig Heads percussion group performing various percussion variations on the Ponyo theme. :)

Best Place(s) to Drink Beer: As certain of my friends know full well, I enjoy drinking vodka martinis and sake. But if pressed to choose just one kind of alcoholic beverage, my choice would have to be a beer -- but one that is served on draft, and the fresher the better. And as I duly discovered on my visit to Germany in 2010, local brauhauses and biergartens are the places where one can pretty much be guaranteed brews that taste amazingly fresh and truly refreshing. In particular, I feel obliged to mention Speyer's Domhof Brewery -- whose biergarten I wish I could have spent more than the mere two hours or so that I did there! -- and Cologne's wonderful kolsch -- which I drank some 1.4 liters of at three different brauhauses in less than 10 hours but, honestly, I'd think it next to impossible to get a good beer from any brauhaus in that land!

Best Restaurant: The proverbial "they" are wont to say that familiarity breeds contempt. However, I find with such as my choice of favorite eatery for 2010 that it's a case of things appearing to get better the more you get to know it and its menu (and its staff get to know you). Although it doesn't have a single one of the many Michelin stars awarded to restaurants in Hong Kong, Jin Luo Bao -- which I first started going to back in 2006 -- has become my "go to" restaurant for Korean food, be it for lunch or dinner, barbecue, jigae, yuk hwe or something else altogether. (And this especially since the last time I visited my second favorite Korean eatery after it had moved a block of so from its original location, I found that quality there has unfortunately dropped...)

I'd agree on the Nina Feng and Evelen Glennie encores though.

Hehehe... no "best movie" because I've got a top ten 2010 Hong Kong movies entry planned for sometime in the near future. (Also, if you look at my movie list entry from two Thursdays ago, you'll see lots of titles of films I liked and would recommend. :b)

And woah, am getting the feeling that we attend a lot of the same concerts. By any chance, were you at the free pipe organ concert at the Hong Kong Cultural Centre last Saturday (too)??

Your beach picture is one of my favorites of your photos from 2010. I think because I can imagine myself walking, swimming and sitting there looking at the ocean

More re that beach pic: I think you'll appreciate that I had waves lapping and covering my feet as I took it. Also, the woman with the blue umbrella? That's my mother walking ahead. :)

Your comments make the photo even better.

I'm glad that's so and thanks again for appreciating. :)