Ponyo in concert in Hong Kong! 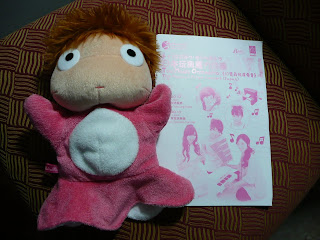 Two collectibles to treasure --
my Ponyo puppet and the programme
for the concert I attended earlier this evening
I have a friend who told me just yesterday that whenever he visits my blog and is confronted with an image of Hello Kitty, he effectively freaks out and quickly moves on to another website as soon as he can. I think he'll do the same again when he sees the photograph at the top of this blog entry (even though it's not of Kitty Chan) -- but I can't help it -- I just have to share that this week has seen me attending not one but two concerts in which Ponyo on the Cliff by the Sea's theme song was performed.

On Wednesday, local group Made in Hong Kong @ Four Gig Heads played a creative and lively percussion version of the song at their A Musical Zoo concert that also included performances of Chinese traditional music works with titles like The Quarrelling Ducks (in which different percussion instruments mimic various duck sounds!) and The Menacing Tiger (for which listeners are asked to imagine a scary tiger prowling through a jungle!). And it really helped lift my mood after something unpleasant happened (not to me personally but still...) at my workplace earlier that day.

But if truth be told, it was just a warm-up for the concert I attended earlier this evening featuring Japan's Toy Magic Orchestra, a trio of classically-trained female musicians who play music using toy-sized instruments, guest violinist Akiko Sawada and ...child singer-voice actress Yuria Nara (aka the kawaii voice of Ponyo -- and as if to prove it, she was asked -- and duly obliged the request -- to say "Ponyo loves Sosuke" twice in Japanese)!

Although the program included a song from The Sound of Music and a couple of Disney movie music pieces, music from the movies of Studio Ghibli were most definitely the featured attraction. And while the songs from such as Kiki's Delivery Service and Spirited Away had their fans, their prominent place in the program order made it very clear that the two clear favored films were My Neighbor Totoro and Ponyo On the Cliff by the Sea.

More specifically, The Magical Forest Concert began with the Toy Magic Orchestra playing the theme song of Ponyo on the Cliff by the Sea, quickly followed by My Neighbor Totoro's theme song. Then, midway into the show, Yuria Nara appeared to sing the same Ponyo song -- and after the concert officially concluded with the song that appears as the opening credits roll in My Neighbor Totoro, she reappeared for an encore performance of that ultra popular Ponyo song with the Toy Magic Orchestra and guest violinist Akiko Sawada.

So for those who're counting: yes, I was treated to three live renderings of the Ponyo song in a single concert this evening and four performances of the song over the course of a single week! To which all I can say is: Ponyo -- or maybe I should say Poh-yee, which is how she is known in Cantonese -- really does rule!!!! :b

Ponyo - what a sweet movie, love it but then again I like anything that Miyazaki does

The Toy Magic Orchestra looks and sounds like a lot of fun. There is a youtube video with four young women dressed in red playing toy instruments. It is clear they are talented and well trained musicians. Lovely presentation as well with large cartoon cutouts of each of each of the players on the white backdrop behind them.

Ponyo is going to make a lot more sense (or at least be easier to take) than Hello Kitty. Hayao Miyazaki is a genius whereas the Sanrio people are marketing geniuses. The idea of a "fish boy" sounds pretty creepy but most fairy tales for children (or the myths they are based on) are.

I like a lot of what Hayao Miyazaki does but I consider "Ponyo On the Cliff by the Sea" a welcome return to top form for him after "The Cat Returns" and "Howl's Moving Castle" -- both of which still are better than son Goro's "Tales of Earthsea".

Re the Toy Magic Orchestra: as I understand it, they're a trio -- but do have guest musicians playing with them sometimes.

Re Ponyo: firstly, I think Ponyo and Hello Kitty both have their fans -- ditto Hayao Miyazaki and Sanrio. Secondly, errrrr... SHE is a fish GIRL, not boy! ;D

Both concerts sound entertaining and fun. Music selections from both "My Neighbor Totoro" & "Ponyo On the Cliff by the Sea" what a treat for you. Is my assumption that both concerts were for adults correct?

Both those concerts were part of a Family Fiesta festival. There were more adults at the Wednesday concert than the Sunday one. At the Sunday one, there were a lot of parents with children but also some adults who went sans children. :)

I am in love with ponyo~ sosuke daisuki!!