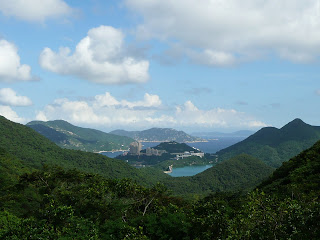 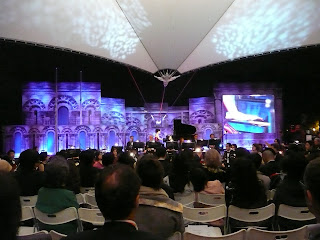 Scene from a free outdoor concert
held one evening last December
at Tai Po Waterfront Park (#5)
It's after midnight -- which means that for the first time in ages, I didn't put up an entry on this blog on a Sunday. My excuse is that I have just spent a few hours writing up a list of 10 Best Films of 2009 for this year's edition of the Unofficial Mobius Poll.

Earlier, I had thought of writing up an entry of 10 Best Hong Kong Films of 2009 -- and do mean to do it some time in the near future (i.e.,before the end of February!). But for now, however, I reckon it'd be more timely to think up and supply some answers to Gweipo's recent query over on her blog of "If you were to give someone a list of thing you "need" to have done / been to / eaten / be able to do while you've been in H[ong] K[ong], what would they be? Just say 10 things?"

1) Attend the Hong Kong International Film Festival (Something I did a few times even before I moved to Movie Mecca!)

2) Visit the Hong Kong Film Archive and take in screenings of old Hong Kong movies -- particularly those not available on home video -- there at its theater.

3) Hike Hong Kong -- specifically and minimally, the Dragon's Back on a beautiful clear day; but, if time and opportunity allows, others on Hong Kong Island and elsewhere (Sai Kung! Other parts of the New Territories! Lantau!) as well.

5) Take in a performing arts event -- be it Western or Chinese classical music, local or visiting theatre, Chinese or Western opera, Chinese, contemporary or some other kind of dance, etc. -- much of which are regularly to be had in Asia's World City.

7) Have hot pot on a cold (by Hong Kong standards!) winter evening.

8) Try all the different forms of public transportation in the territory, including MTR, bus, tram, ferry, green mini-bus, red mini-bus and cable car!

9) Visit some parts of Hong Kong which are not served by the MTR (be it some place urban like atmospheric Kowloon City (and the nearby Kowloon Walled City Park) or rural like an outer island).

how do know the schedule of films to be shown in the theatre in advance?

Well, I must say that I feel pretty good that I've done most of the things on your list. Good thing! Otherwise I'd feel pretty lame, since I've visited Hong Kong a total of seven times.

3) I must say I feel lacking in this category, although I did hike from Big Buddha down to Tung Chung.

4) Check for your first three examples and not yet for the fourth.

5) Check. Saw PixelToy at Kubrick, but still haven't seen any Cantonese opera like I've intended (although I'll be rectifying that on my next trip!).

6) Check. But not chicken's feet or duck's tongue, which is something that will forever be untasted if I have my way.

8) Check to all except the green and red mini-bus.

10) Not yet. It seems like I may need to stay for a longer period of time if I want to check this one off your list.

You mean the Hong Kong Film Archive? If so, click on the link I provided -- or this one:-
http://www.lcsd.gov.hk/CE/CulturalService/HKFA/en/3-1.php

You should feel pretty good. You've done more than lots of expats who have lived here for years...!

Re Big Buddha to Tung Chung: Have gone part of the way but have heard stories of pissed off locals and their dogs as you near Tung Chung -- so detoured around the time I reached Po Lam Monastery to another trail!

As for chicken's feet and duck's tongue: they're tastier than you might think! ;b