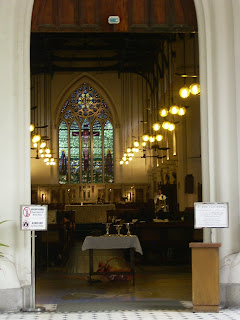 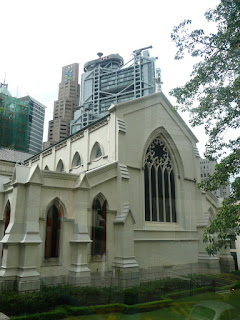 Chalk it to my being an ex-convent schoolgirl but, in all honesty, when I saw this week's Photo Hunt theme, the very first thing that came to mind was the line from The Lord's Prayer: to wit, "Give us this day our daily bread.." So here's offering up views this week of St. John's Cathedral, whose home is the oldest surviving Western ecclesiastical building in Hong Kong -- and is open daily from 7am to 6pm, as stated on its website, "for quiet prayer and meditation".

An Anglican establishment which opened for service in 1849, it has a fine central location, albeit one which sees it physically overshadowed by many a taller, larger and way less godly as well as newer structure. (For the record, I took the second photo while passing by on a bus -- hence that shot containing some reflections in it.)

More than incidentally, the Cathedral occasionally is the venue for classical music concerts. I haven't made it to one yet -- because these tend to take place on weekday evenings and my office is located closer to Shenzhen than Central! -- but hope to do so one of these days as I can imagine that it is a pretty fine setting for such events.

Nice job on this theme YTSL. Daily worship takes place in those lovely buildings I'm sure.

Really nice piece again. We had to say the Lords Prayer every day in Primary School in Scotland

I love the old-style churches... wood, stone, stained glass, and tombs, the quiet...

What a wonderful take on the theme! Loved it.

What a great job on the theme. Happy weekend.

Great take on the theme, I was taught by nuns too at one point in my school career! Have a great weekend

I love old churches - they really have soul, as opposed to modern ones, which just seem like boxes.

Lovely photographs. I'm always drawn to old churches. They have such a magical aura compared to the more modern ones.

Agree with you re the place looking like it does get put to good use. I'm glad. Really dislike the trend to lock up churches on days other than Sundays that some seem to have taken to doing.

Thanks -- and I believe it about primary school in Scotland! :)

I'm the same with you. I actually don't consider myself all that religious but I do appreciate the effort and devotion that went into those buidings' construction.

Thanks for visiting me before I visited you today! :)

Strange as it may seem, my convent school only had one nun -- but she came all the way from Ireland (though she elected to become a naturalised Malaysian after Malaysia became an independent nation)! :)

I know of a couple of nice modern churches (including the one pejoratively known as Paddy's Wigwam in Liverpool!). But it does seem that in the main, old really is better with regards to churches.

It definitely does seem that there's a preference for old over new churches among Photo Hunters... ;b

The Lord's prayer is just wonderful and inspiring :)

I'm a big fan of churches of all faiths and eras, so I really enjoyed seeing this one.

Yes, daily bread was the first in my mind too, but I didn't follow it up. Do try to get to those concerts - if it's anything like Winchester Cathedral, it will have wonderful acoustics.

you can do the worshipping daily even not inside these edifices..

nice subject for the theme and i always love reading the post that comes with it.

It is so pretty!!

I think you're a bigger fan of it than me but will certainly say that it's well written and memorable. :)

Am happy that my choice of subject matter is to your liking. :)

True enough. Which is why I often tend to associate churches with humans and admire the workmanship that went into constructing them more than anything. :)

I agree that it is pretty nice. :)

It's funny because the same thing came to mind for me when I saw the theme but I didn't think of how to represent it with a photograph. You did a great job. That's a beautiful cathedral.

How interesting ! An anglican church in the middle of Hongkong !

Interesting view. It's like the buildings behind are growing right out of the roof of the church.

Marvelous! What a good place to explore, too.

Thanks for the reminder!

What a great take on the the theme!

Yes it has been awhile since I have participated...but it is nice to be back and to visit so many blogging buddies...

Happy weekend to you

Lovely post for 'Daily'. Beautiful church. I also enjoyed viewing and reading your Photo Essay on Clear Water Bay Peninsula. I am still surprised to see open area. I have such a stereotypical view of Hong Kong being just the urban area. You're helping widen my knowledge of Hong Kong.

I'm glad I had the photos for the idea I have with this week's theme. :)

Well, Hong Kong was a British Crown Colony for some years after all. So... ;)

Teehee re your view of that second photo! :b

Hong Kong is indeed a great place to explore. ;b

Welcome back once more to Photo Hunting. :)

Thanks for checking out other entries on my blog besides those for the Photo Hunt. :)

As I expected several of us did the Daily bread idea. Mine was a little different from yours. Yours is very pretty. Nice pics.

What a lovely idea for the theme :-)

I liked your photo for this week's theme -- and am glad we had similar thoughts yet different takes on it. :)

That's a lovely building for a place of worship. Looks so tranquil.

I think St John's Cathedral can indeed seem like a tranquil, quiet oasis in a noisy part of the world... ;b