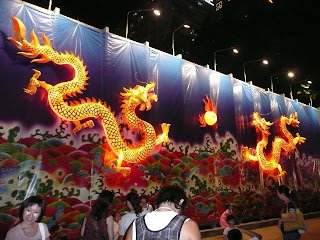 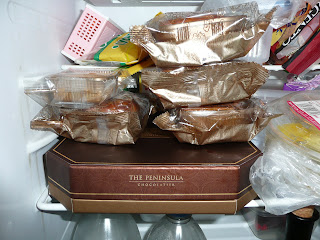 Mooncake gifts galore -- together with
a box of chocolates from The Peninsula! --
have made my small fridge look really small indeed!
Thanks to the hype surrounding the 60th anniversary of the founding of the People's Republic of China, it was hard to not forget what a special day October 1 was this year -- and easy to overlook the fact that October 3, 2009, actually is a public holiday in Hong Kong too. And this even though I made plans early on to go to see the Tai Hang fire dragon and the mid-autumn lantern carnival in Victoria Park this evening with a friend.

But as my Canadian-Chinese friend noted earlier this evening, it sometimes is hard for us who have lived elsewhere in the world that mid-autumn festival to fully realize how big a deal this festival really is in Hong Kong. To be sure, it is celebrated wherever there are significant numbers of ethnic Chinese people (including my native Malaysia -- as fellow Photo Hunter Bengbeng reminded me with his Photo Hunt entry for this week). However, the lantern displays here really do put most elsewhere's to shame.

Additionally (and especially this year) nowhere else in the world have I received so many mooncakes as gifts. So much so that even though I've given a bunch away, I still have enough "in stock" to have the gluttonous pleasure of eating mooncakes for another couple of weeks after the festive lanterns are put away, I reckon! ;b

I would love to see the lantern carnival in Victoria Park. (If you have any more photos, please post them!) I might have to plan a future trip to HK during this time of the year.

Yes, I do have more photos -- and if there's enough interest, maybe I'll do a combo mid-autumn lantern festival post from different years and places! :)

pleasse do it. i want to see it too

Dumb question time: If mooncakes are a typical gift at this time of year, does that mean that people don't eat them during the rest of the year?

I recall seeing mooncake ads when I was there in August.

Is it like pumpkin pie here which seems to be only served during the Halloween and Thanksgiving season despite people probably liking the treat the rest of the year?

It used to be that mooncakes were not for sale any time other than around mid-autumn festival. Now they are indeed sold at other times of the year but lots of people, including me, would not think of eating them at any other time of the year. A good thing too -- otherwise, I might get a heart attack or something as a result of eating mooncakes more regularly than I currently do! :D