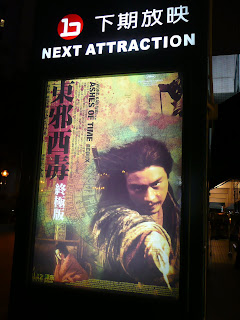 For those still keeping tabs of the "when will Ashes of Time Redux get an actual theatrical run in Hong Kong?" saga: Maybe, finally, it's going to happen at long last! Except that as of this evening, I still have yet to see confirmation of this happening on the Broadway Circuit website!

Bleeeh!!! Because I have to say that the way things have been shaping up, it really is hard for my viewing of this work to be anything but anti-climactic. Also, will I ever get to see the poster of the film in which Brigitte Lin Ching-Hsia prominently figures see the light of the day here in Hong Kong? Here's wishing even while not feeling that one can hold out much hope for that prospect... :S

How was THE WAY WE ARE on second viewing?

Oh I LOVED The Way We Are, brill film imho.

And I hope you'll be in the camp who liked the redux of Ashes Of Time. I'm of the camp who still prefers the original one.

And sorry to disturb you with this but are those dvd shops in Mongkok (you know the ones which were one floor down in the tiny building, are they still there?)

I do have a feeling that by the time you see it, you will be disappointed -- too much hype for some of us, too much waiting.

If you wanted to see a strange sight, I should take a pic of the DVD of this sitting on the shelf of a local Wal-Mart. Now that is a sight that I never thought I would see -- Leslie Cheung next to Larry the Cable Guy and industrial-sized boxes of merchandise!

No kidding re "Ashes of Time Redux" (which I got confirmation from a knowledgable source should be out before the end of this month).

As for "The Way We Are": Reckon it holds up pretty well on second screening. (See the "Recently viewed" section on the left!)

Re "Ashes of Time Redux": I'm going to go in with low expectations because quite a few people who loved the original AoT have had negative reactions to it. Still, can't keep away though!

And sorry but haven't been to check out those DVD shops in ages. Believe it or not, I hardly shop for or watch DVDs any more! :S

Well, I've gone from assuming great things to not so great things. So maybe I'll be pleasantly surprised.

And yes, do take that pic you described. And wow re "Ashes of Time Redux" DVDs being on sale at Wal-mart! :D

'End of the month' Yikes, yikes, yikes. There are things I like in both movies so I've started thinking of them as different movies rather than an original and a remix with tweaking.

Glenn, Yes, please take a photo at Wal-Mart if you can. I'm already laughing at the thought of Leslie next to the Cable Guy.

And when I finally do watch the movie, hope that I'll be able to think of "Ashes of Time Redux" vis a vis the original the way you do.

AOT is at Walmart?? For reals? Wonder if it's in a store near me on the West coast.

Will have to wait for Glenn to confirm re AOT (Redux) at Walmart but didn't you see it in a theatre near you??

I keep hearing that the differences are miniscule other than the soundtrack - is that not the case? Considering that WKW was working on this for years that seems a little peculiar. I wonder though if the original will sort of disappear now that the Redux is out? Will that become the authentic version? That would be a shame as I think its close to one of the greatest films ever and one that reveals new levels on every viewing. And I liked the music and have the soundtrack! Give us some feedback after you have finally seen it.

It's a difference of a few minutes and some bits of rearranging as well as a change in music. Music apart, didn't think that the changes were that big a deal but I know people who love the original but have been disappointed by the Redux version. Something else that has been mentioned is how the colouring looks to have changed... and not necessarily for the better.

All of which doesn't bode well... yet I still want to see it all for myself, you know? :S