Last weekend, I went on a hike (in northeast Hong Kong) with my mother on which we crossed paths with more than our fair share of roaming cows and wild dogs. After our encounter with four of the latter (which fortunately was resolved with the kind help of an elderly gentleman who appeared from seemingly out of the blue to walk with us through the section that he told us the pack of wild dogs liked to frequent), I got to telling my mother about a hike I had taken earlier in the year in which my hiking companion and I encountered some other wild dogs as we were descending a steep hill...

As can be imagined, that experience brought about not only a major adrenaline rush through our veins but, also, there being no photographs taken by me during the majority of our descent down the hill that was the last leg of a combined hike in Clear Water Bay Country Park that started off with the easy 1.55 kilometer long Clear Water Bay Tree Walk, then moved on to the more challenging Lung Ha Wan Country Trail that may be only 2.3 kilometers in length but involved going up and down the 291 meter high Tai Leng Tung -- from where, as I hope this photo essay will show, beautiful views are to be had... 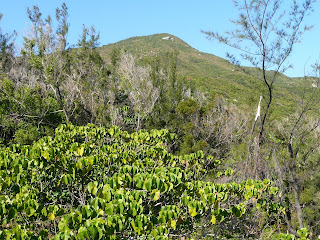 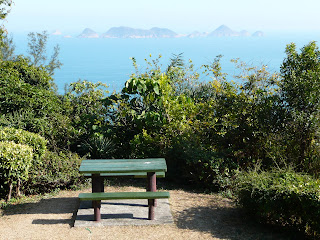 Before ascending that hill (mountain?) though,
we took time to gaze out to sea 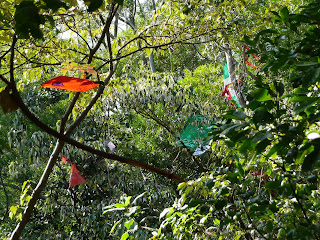 ...and also ponder why portions of
the Clear Water Bay Tree Walk
seemed to be a graveyard for kites! 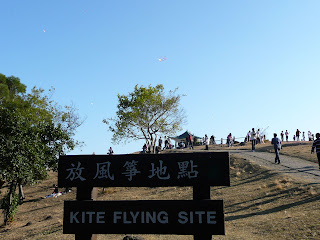 That mystery was resolved when
we rounded a corner and discovered
a designated Kite Flying Site nearby! ;b 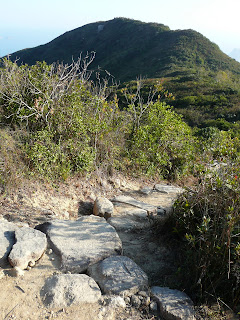 Warm up over, time to tackle that hill! 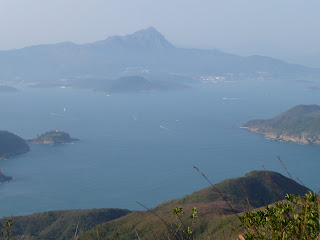 One of my mantras when tackling a tough ascent:
"the view had better be worth it"
-- well, I think this one was! :) 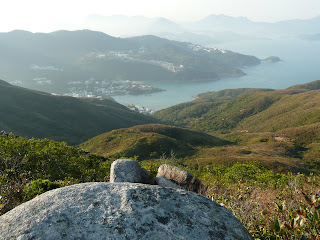 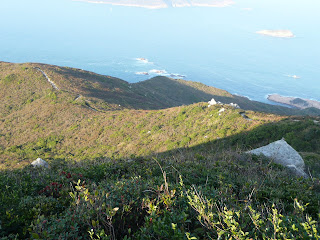 The descent that awaited us from the top --
a bit formidable even minus the wild dogs factor
(and since we encountered them shortly after
this photo was taken, thus endeth this photo-essay!)

I'm glad to see that relatively blue skies are still to be had in Hong Kong. (They have been pretty rare during my several trips there.)

Do the wild dogs surround you and growl or do they keep their distance?

Today on the way to work traffic (relative -about 20 cars)was held up for five minutes while 2 cows ran back and forth across the 2 lane road. Their owner, his wife and daughter were chasing them. Finally they chased them back into the pasture. Unlike you and your mom I was safely sitting in my car.

Have to say that living in Hong Kong has taught me not to take blue skies for granted. OTOH, it's really bad luck when -- like recently was the case with Brooklyn Brian -- there are no blue skies when one visits for a week or more! ;)

It depends. Up on Tai Leng Tung, they were actually behind me at one point, disappeared into the bush, then kept on reappearing and disappearing along the trail -- which was really freaky.

Over the weekend, the group appeared and one made as if it were going to charge us but when we stood our ground, it backed away. For a few minutes, they stood their ground and we did ours. Then, fortunately, the old gentleman appeared and frightened them away.

As for the cows: most were content to mind their own business but one was intent on walking along the same narrow path as us... which was kind of disconcerting! ;S

Thank goodness for elderly gents who remember when being a gentleman included helping women with little difficulties, including packs of dogs. An updated code of chivalry perhaps. While there aren't any dragons to slay anymore--St. George and Siegfried got the last of them on this side of the world--there are still plenty of courtesies that can be extended.

one was intent on walking along the same narrow path as usI am more familiar with packs of wild dogs--quite a few of the in parts of the de-urbanized sections of Detroit--than cows. I do know, though that they are pretty big when up close and tend to move at their own pace. Probably room for one cow and not much else on the path.

Great images, as usual--you have a terrific eye.

Speaking of gentlemen: I have a friend in England who would always make sure he walked on a certain side of me as we were walking on the pavement (sidewalk in American English). Puzzled, I asked him why this was so. "To protect you from being splashed by cars driving too fast into puddles, of course", he explained! :D

Re cows: yes, exactly re one of those that we encountered being happy to move at its own pace *and* there not being much room on much of the path to get around it! ;S

And in general: thanks for the comments along with kind compliments. :)