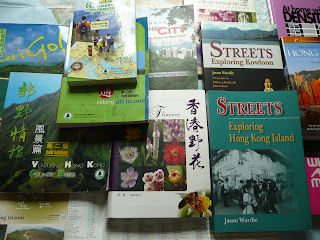 It's been a while since I took a photo expressly for the Photo Hunt like I did this morning since I'm usually able to find a suitable photo (or more) for a theme by perusing my ever-growing personal digital photo archive. Even more unusually for a Photo Hunt, I felt obliged to take a photo in my living quarters of some of my personal belongings.

This circumstance is attributable to it being so that, as Nuala Rooney observes early in her book about Hong Kongers' experience of high density domestic spaces, "[w]hile high density is certainly a phenomenon increasingly associated with most major cities around the world, in Hong Kong, where only a third of the total geographic land mass can be used for building, affordable spaces tend to be small" (At Home with Density, 2003:2).

Put another way: living in high density domestic space encourages one to want to head out of it. (Though, I have to say that for me, it's also a case of my being pretty happy to live in a small apartment because I know my lifestyle involves being out of it for most of my waking hours!)

But if I needed further encouragement to venture out into the rest of Hong Kong, I've also got -- as I think can be seen in the above photo -- hiking guide books galore as well as books on exploring Hong Kong's streets and checking out local culture and heritage. Of those I have, I'd like to single out the following for being invaluable guides to this part of the world that I've come to realise is more than just a Movie Mecca:

- the Country & Marine Parks Authority's Hiking All in One (Friends of the Country Parks and Scout Association of Hong Kong, 2005)

I know what you mean about density: When we lived in a small apartment, we were out and about all the time - botanical gardens, baseball games, movies... now that we live in a house with a yard - not much more spread out, but more - it takes something really special to drag us out. Nice take on the theme!

My ”Books” entry is really cooking this week. Hope you can stop by!

talking abt density, the Mrs n i have moved from semi-d to condo to flat to low cost flat back to condo to spacious semi d double storey, at each move we had to discard so much stuff books included, now it seems we still have loads of clutter. books were the first to be thrown away...at a nominal rate of 10sen/kg to the ah pek who collects for recycling...

Great take on the theme. I love looking at the covers of the books you showed us. I have a lot of walking guides to the area I live in because there are so many different trails and I went on a kick of trying to walk on as many as possible.

I had to laugh at Bengbeng's site because right after my comment posted I saw your comment and we both mentioned reading online a lot too but also reading in bed before going to sleep and in the morning when we had time. I ended up doing a PS that I thought it funny we had both said almost the same thing (possibly at the same).

As always, I enjoy a glimpse into life in Hong Kong via your Photo Hunts. And you can't go wrong with "books galore"!

Continuing the out vs in discussion: A friend of mine showed me her apartment which is in a massive complex that comes complete with swimming pools, outdoor exercise area, games rooms and such. Told her I'd never want to live there because paying the maintenance fee would make cheapo me feel obliged to stay in the complex and use all that stuff more -- in which case I'd be spending less time out and about in the rest of Hong Kong!

Woah, that's a lot of moving. Hope it was over a long period of time!! And ouch re selling your books so cheap... but can understand: tried selling my books at a street market in Penang. My conclusion from that is that Malaysians don't like to read books all that much! :(

Glad you like the glimpses into Hong Kong life I'm giving you, and hope you have a great weekend too! :)

from the books, it looks like hiking and nature seem to be your most interest. I love browsing through book stores even if I don't really read the books, it still such a joy to see them

I know what you mean about living in small spaces but I kind of prefer it, less to clean and you have a real good excuse for not having anyone to stay overnight

ps, my photohunt is here

We have a term for living in a small cramped place that translate to "swapping of faces" due to the small space to move around, lol!

ops my link is here

Thanks for the reading tips! Hong Kong: A Cultural and Literary History looks especially interesting.

I should have known you would have lots of books on these topics and I know they are well used.

I confess I could not cope with density and often regret moving into this pleasant little town. Your book space must be at a premium.

I bought quite a number of Chinese books at HK Airport the last trip I was there. I didn't have time to shop for books in the bookstore in the city. :(

What a great collection. It's intriguing to think of hikes being close by to such a place as Hong Kong.

Aloha!
Great take on the theme:) I'm glad I stopped by.
Happy photo hunting to you.
Come by & visit:)
Cindy O

I'm a sentimental lot. All my books are still with me, from the time I started buying them in grade school up to now. Text books though I get to donate every now and then. I just have to have extra space for my books. :)

I'd pick the one on the bottom :D Too bad I don't read chinese characters...some similar with japanese but not much no? You do seem to have traversed the city well...

You have a wonderful collection of books here...showing us your interests, I'm sure.

Mine this week is my high school year book with me...LOL

Density is an issue with us and our small two bedroom house. THe3 second bedroom is full of books, dvds, cds and other things! Great shot for this week's theme. It looks like a great selection of books about Hong Kong. Happy weekend

Wonderful photo of interesting looking books on a focused topic. The 'Street' books for Hong Kong and Kowloon look especially good. Well, all of them look like fun reading before heading out to explore the areas.

My favorite book on large cities is one on the small spaces of Tokyo. These spaces, very tiny almost kiosk size apartments, take out, cleaners, etc. are literally built in the cracks between buildings.

I very much like the sound of Michael Ingham's book, amongst others. Birthday coming up! :)

You've got useful books. I, too, enjoy the glimpses you give us into Hong Kong life.

My books are here: http://blondesherry.blogspot.com/2009/05/photohunt-books.html

Hiking is a major interest of mine but I've got lots of other interests (and book preferences). Still, I must say that I've never indulged my love for hiking and venturing out into the countryside as much elsewhere as in Hong Kong! :)

Haha re the "swapping of faces" term/idea! :D

Knowing your interests, I think that book will be just your alley. Highly recommended! :)

You really do know me pretty well (now), it seems! :b

Yes, alas, my book space is at a premium, with my bookshelves now overflowing. It's amazing how many books I've accumulated in my (relatively) short time in Hong Kong!! :S

To be honest, imagine that there's more choice of books -- at least English language ones -- in Singapore than Hong Kong. There already is in Malaysia vis a vis Hong Kong! :S

Not "close by to" -- actually "in" Hong Kong. Seriously. One reason why only 1/3 of the total geographic land mass can be used for building? A sizable amount has been designated as country park land!

Thanks and no worries, my Photo Hunt has indeed included your blog. :b

Re your preference among my books: The one on flowers??

Re Chinese characters: One of the Japanese writing systems makes use of them.

That's just a small sample from my book collection... of ones that I regularly use for reference. :)

I used to think that living in a small space would dissuade me from accumulating stuff but... ;S

Thanks and as I think you know, Hong Kong has its share of tiny stores and stalls too. Wish I could take photos of some of them but, alas, I fear that the store and stall folk wouldn't want that to happen. :S

Michael Ingham's book would be a very good introduction to Hong Kong, I think. :)

Thanks for appreciating. I appreciate that! :)

Nice collection and I agree that small, dense spaces make one want to get out more. I would not do well in your area. I like my wide open spaces.

You asked me why I particularly liked the picture I posted this week - it's the colors - the tangerines and orange colors. :)

This is a very interesting peep into your life - but only what we'd expect, since we know of your love of hiking in the countryside.

I enjoy seeing how other people live, especially non-USA.

living in an Asian city like you, I can relate to the density thing. I can only wish we have more parks and gardens than commercial buildings though.I find HK quite interesting for some hiking, thre're a lot to discover anywhere.

But if you have quiet in that small apartment, you can find a wonderful book and curl up and just hibernate for several hours... shut the world out. My books are up here.

Great post, I enjoyed not just the photo but also your commentary on urban living!

Guides are a good thing to have though I rarely keep them when I do get them... unless there's a sentimental reason to hang on to it.

As always, a wonderful look into your space!

As the saying goes: different strokes for different folks! :)

Thanks for liking this post and answering my query over on your blog. :)

Some people don't know but others like you certainly do. (BTW, went on yet another hike earlier today! :b)

If so, then this blog's for you then! :b

Yeah, parks and gardens and greenery in general are most welcome within and close to the urban jungle!

True... and I do sometimes do that. But the thing with books is that they can wait. Certain things I want to do outside of my apartment tend to have time limits to them!

Interesting that you're not much into guide books. I, OTOH, most definitely am! :)