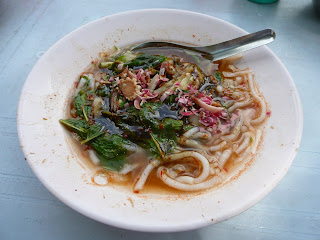 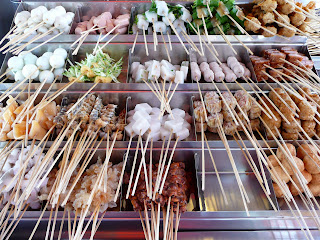 Not halal - lok lok (AKA dip dip --
so called because you take the sticks and dip, dip,
their contents into boiling water to cook them!)
from my mother's and my favorite stall in Gurney Drive
Reading the description of George Town (and Melaka/Malacca) on the UNESCO web site, it seems like the main reason for their recent inscription on the World Heritage List is that they are full of architectural treasures. Ask most Penangites (or Malaysians, or our Singaporean neighbors for that matter) what's the best as well as most Penang thing about Penang, however, and the answer will very probably be: Its food. And that for sure will be the immediate answer -- yes, often times even ahead of "family"... ;b -- when you ask Penangites abroad what they miss most about their home state.

Given this state of affairs, you would most definitely be right were you to surmise that I spent quite a bit of time during my most recent trip back to Penang checking out my favorite eating spots and eats. Among these were the Perak Lane beehoon that's famed for its fish beehoon and porridge (but whose beehoon with pork and kidneys is my dish of choice there!), Gurney Drive rojak, the Tari (Dancing) Cafe in Tanjung Tokong that grew out of a small Tari Burger stall (whose hot dogs -- sorry, New York, Chicago, etc. -- truly are the world's best!), Penang Hokkien Mee from a stall near the Pulau Tikus market, and the delicious fare in the two photographs at the top of this entry.

Sounds and looks good? All I can say to those who've yet to sample them, they probably actually taste far better than you can ever imagine! As for the cost: Believe it or not, each bowl of that heavenly assam laksa costs quite a bit less than US$1 while each stick/skewer of the lok lok goes for 70 Malaysian sen (i.e., less than 25 US cents). :b

The internet is a great thing isn't it?

I'm sitting in Maryland reading your blog from Hong Kong about food in Malaysia and now I'm looking at the menu of the Malaysian place near here to see if they have assam laksa...

If I go have that for lunch today, I'll post back!

Oh, that looks yummy. And those dip, dip things look pretty nifty. (And I love your photo of them!) What sorts of things are skewered? (Any vegetables, for instance?)

Mine cost a good deal more than a $1 though!

Thanks for the idea!

Yes, well, but, actually, have posted on Penang/Malaysian food before -- just go and check out some of my older blog entries!

And yes, the internet is a great thing again -- and I'm glad you enjoyed your Penang assam laksa lunch in DC. Also, yes, the Penangite in me -- we've been labelled the Scots of Malaysia -- has me thinking: For US$7.25, you darn well better! ;b

No, what I meant by "post about food eventually" was that I saw a few new posts lately about Malaysia and thought "Hmm, where's the food?" That's all.

I think you really could start a second blog just about food BUT I bet your *real* work probably keeps you busy enough already.

YTSL, looking at the laksa picture makes me go hungry instantly! missed those laksa and our leisurely chats by the seaside a lot!

And yeah, there is this leetle thing called work -- and, also, life in general -- that keeps me busy and reluctant to have more than one blog -- which partly is why this blog is such a hodgepodge of subject matter! ;b

Yes, well, we just have to make it a point to meet again in Penang before too long... or, alternatively, you (and the missus) could come over to Hong Kong for a visit. :b

oh my God! i miss lok lok and laksa. looking at these pics is torture.

Heheheh... especially when I think of all your great food photos that got me salivating! ;b