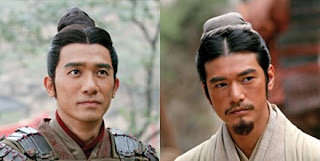 Little Tony and Takeshi co-star again...
this time around in John Woo's Red Cliff
It's so late as I write this blog entry that even though I'm treating it as Tuesday night, we're now officially into Wednesday morning. So this is going to just be a quick and dirty "heads up" that the bc magazine website has finally been updated, making it so that the following film reviews by moi -- and quite a bit more besides! -- are now available on line:-

2) Jiri Menzel's I Served the King of England;

4) Tsui Hark's Missing (which I really wish could have been so much better).

Your review of Red Cliff got me thinking: why isn't Zhao Wei a bigger star? I know she's done some good work (Green Tea, Penitentiary Angel) but I really expected her to be a bigger star by now.

Did she do a lot of TV dramas in Asia? Maybe she's a bigger star than I think.

I can't get too jazzed about Red Cliff -- definately something I'd wait for the DVD for to enjoy.

Do you think the directors, etc of many of these big spectacle movies get carried away with the spectacle, loose their focus and end up with movies that are flat. Red Cliff doesn't seem all that interesting. I'll see it for it's male stars who are good actors.

I think that Zhao Wei is a big star -- just more so in her own country (and related territories) than elsewhere because it seems like she's only ever worked in Mandarin thus far.

Re "Red Cliff": Faults and all, I still think it's worth checking out.

What you suggested may be possible but I also think that many, if not all of them, just don't have that much experience working with such huge casts, budgets, etc. At least, with "Red Cliff", there are several interesting characters. It's just that, well, it's John Woo -- so pretty much all of them are male!

As for "Missing": Yes, well. Suffice to say that it made me want to cry to see how bad a film directed by my once favorite director and starring one of my favorite current actresses is. :S

I just pre-ordered Missing from YesAsia. Am I just wasting my money?

Not only are you wasting your money, I think watching the movie will made you depressed about how low Tsui Hark has sunk. :(