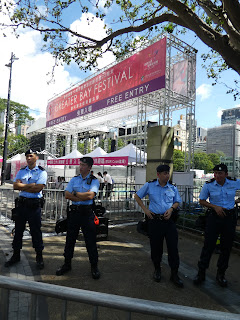 Is it possible that there were more police protecting
the Greater Bay Festival space in Victoria Park
than the Legislative Council Complex yesterday afternoon?


This morning was yet another of many these past few weeks where I woke up and went to check the news online with no small amount of trepidation.  Having seen images of the police assembling in frighteningly large numbers and firing tear gas to disperse anti-government protesters at Admiralty before I decided to call it a night after Hong Kong's most tumultuous July 1st ever, I worried that there would be news of more police violence and bloodletting.


I thus was relieved to find no protester deaths as a result of the police action over the past 24 hours.  And it also was comforting to hear that there have been no more protestor suicides in the same period; thanks in part to some protestors literally dragging and carrying those of their fellows who had wanted to remain in the Legislative Council Chamber out from there, and consequently away from danger.

Yes, it has indeed come to this: that I now consider it a good -- or, at least, not bad -- morning to not be greeted by the news of the death of people wanting to do good for Hong Kong and those who love this place (and consequently want Hong Kong to be allowed to be Hong Kong rather than just another Chinese city).  At the same time, and I think this is worth nothing, I had zero fear that even the most radical of the anti-extradition bill protesters would do what the leftist rioters of 1967 did: that is, bring about the deaths of innocents -- or, actually, even for that matter, any members of the police.


In the cold light of day, I think this puts what those young people who broke into the Legislative Council Complex and trashed much of it yesterday evening did in a better perspective.  Put another way: they destroyed objects and damaged other material items; but they did not go about seeking to fatally -- or, even arguably, seriously -- harm other human beings.

Don't get me wrong: I don't condone their actions.  In fact, I'm one of those "moderates" who already gets disturbed by actions such as throwing eggs at, and grafittiing the walls of a police station.  However, like many Hong Kongers, I truly can see why certain people would become so frustrated and angry, and feel that more dramatic measures than protest marches (even one with some two million participants) were called for in order to get Carrie Lam to actually withdraw the currently merely "suspended" extradition bill, never mind accede to the other demands that have come in the wake of her administration's actions over the past few weeks.

In addition, it seems like the police could have prevented the break in to, and trashing, of the Legislative Council Complex if they really had wanted to do so since, among other things, it took several hours for the protesters to actually get into the building.  So why didn't they?  Were too many of them too occupied doing such as being on duty protecting the Greater Bay Festival attendees -- all maybe 100 of them, if that?! -- from the people who had assembled at a different part of Victoria Park yesterday afternoon to begin yet another large protest march (this one's participant number estimated at a "mere" 550,000), one that we would love to think could make some positive difference but wasn't even the main news event of yesterday?!
Posted by YTSL at 11:59 PM