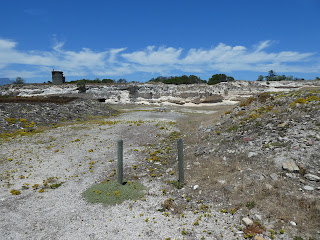 The limestone quarry on Robben Island where prisoners,
including Nelson Mandela, used to toil daily
Close to three and half decades ago now, I was a pupil at a boarding school in England.  At the time,  Nelson Mandela was serving his time as a political prisoner in South Africa, and protesting against Apartheid in South Africa was a really big thing.  Even at my school, where the Torygraph was the newspaper of choice of many of my peers as well as the teaching staff, there were many supporters of that political movement.
Full of passion to do something for the cause, a number of my classmates discussed doing such as boycotting fruits and other goods from South Africa.  After a friend from Lesotho (who was the person whose home was the closest to South Africa of any of us) opined that doing such things would end up hurting farm workers and such more than the government, some of us decided against this action.
Alternatively, it was deemed a good thing to boycott British organizations that did business in South Africa.  So one fine day, I went to the local branch of Barclays Bank, which had investments in that country, to close my acccount with it and then walked across the street to put my money in a rival bank.  And of course, I didn't have much (as I was still just a student, after all!) -- but I like to think I did manage to make a small contribution to Barclays' eventual decision to withdraw from South Africa not too long afterwards!
Fast forward to present-day Hong Kong and, well, I am indeed still taking part in political actions, including as recently as two evenings ago.  Contrary to what the more conservative of my friends (who look upon me as quite the radical) appear to think though, I actually don't go to every single political protest in town.  For example, I didn't go to the three protests that took place this weekend -- including the anti-extradition bill march over in Kowloon today that attracted over 230,000 participants!
This may sound funny (now) but my reason was that, as today's protests was billed as an attempt to explain to Mainland Chinese visitors to what the anti-extradition bill protests are about and I can't speak Mandarin/Putonghua, it didn't make sense for me to go!  Put another way: I really thought that today's was going to be a fairly small protest and would involve protesters actually going up and doing such as trying to engage Mainland Chinese visitors in actual conversation along the route!
While it wasn't quite like this, there are indeed reports of march participants directly addressing Mainland Chinese and seeking their support.  In the process, there was indeed a lot more Mandarin/Putonghua utilized at today's protest than any other one that Hong Kong has seen in recent years.  And considering how Cantonese is the language of choice of most Hong Kongers, this arguably is as surreal a state of affairs as -- or an even more surreal situation than -- the anti-extradition bill rally held on the eve of the recent G20 Summit in Osaka during which 10 different languages ended up being spoken!
Something else that is quite something to realize is that there really (still) are a lot of people who remain willing to turn up to protest against the extradition bill.  Put another way: public opinion has not turned against the protest and protesters in wake of the events that took place late on July 1st.  And today, this protest may have won the understanding, if not the support, of a number of Mainland Chinese visitors to Hong Kong.
Posted by YTSL at 10:53 PM

The conservative here would call me a libtard. And I would consider my self middle of road lean left.
Coffee is on

Based on what I've read of your your writings, I'd agree with your assessment of your political leanings. And I guess the conservatives where you live would consider me a libtard too! ;b