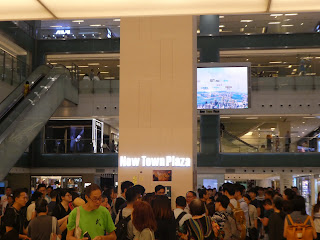 Things are not quite normal still at New Town Plaza 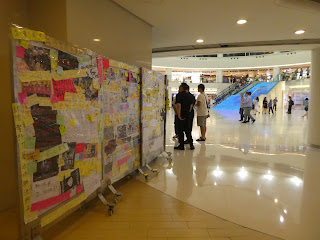 How many shopping malls have Lennon Walls, after all? 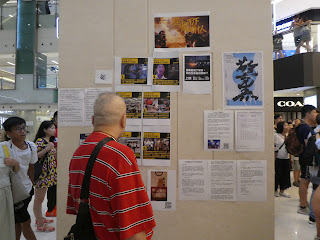 Some other walls in the mall have surfaces redolent of what I saw
during the "Occupy" phase of the Umbrella Movement back in 2014
I returned to the New Territories "New Town" of Sha Tin for the first time today since taking part in an anti-extradition bill protest march there on the same Sunday that the riot police ended up invading a popular area shopping mall located near the march's official end point.  With those events having taken place less than two weeks ago, they definitely were still on my mind when I walked into New Town Plaza, the location of scenes of mall mayhem unlike any that Hong Kong had previously seen.
My initial impressions was that things had gone back to normal there.  But as I walked through New Town Plaza, I got to realizing that a series of Lennon Walls have been set up within the shopping mall. on either side of the exit leading to Sha Tin Town Hall; with the added novelty of these ones consisting of mobile panels that can be wheeled about!

As it so happened, my reason for going to Sha Tin this evening was to attend a "bamboo circus" performance at the town hall by Vietnamese arts troupe Lune Production.  Featuring exciting acrobatics, mood-setting music, fun humor and super innovative choreography, A O Lang Pho is one of those shows able to transport its audience to another world.  However, I found myself jolted back to troubled Hong Kong when, in one of those coincidences that surely couldn't have been foreseen, its featured props included bamboo poles and sticks that got me thinking of the weapons used in the Triad attack at Yuen Long on Sunday night, and there was a number which saw the performers donning construction helmets of the types that have come to be associated with Hong Kong protesters!
After the performance, I made my way through New Town Plaza to the area MTR station -- the way I along with many other protesters had done two Sundays back.  In the mall, I noticed that crowds had gathered -- with one in a circle surrounding people talking intensely with one another and a couple of others surrounding columns that had been newly plastered with posters with images as well as textual information about what had happened in Yuen Long on July 21st, and injunctions to take part in planned protests in that northwestern New Territories town tomorrow.
I'm not sure how long those posters will remain on those walls but I do know that they were put up just minutes before I got onto the scene as the man responsible for those actions was still around in the area.  Dressed neatly in office wear, he would not fit most people's image of a radical activist; and this especially he was accompanied by a similarly conservatively-attired female friend who looked far more nervous than him but determined all the same.
Here's the thing I want to emphasize to those who still don't get it: many of the people taking part in the extradition bill protests -- which have morphed over the weeks to also include protests against police brutality and violence, and more -- are not your usual protesters; not least because they come from a wider range of professions and more walks of life than might be expected.  The fact that mothers, senior citizens, journalists, lawyers, social workers and -- today -- airline plus airport workers have organized as well as taken part in protests these past few months says a lot to me, including that we protesters are far from alone.  Indeed, I'm inclined to believe these days that we are the mainstream in, and majority of, Hong Kong!
Posted by YTSL at 11:59 PM