Some thoughts on alien encounters in Hong Kong ;) 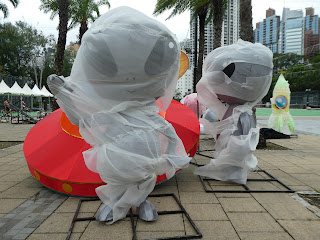 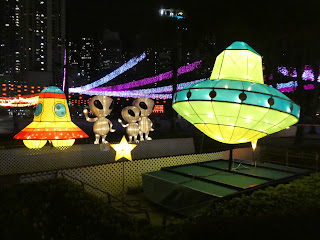 Some illumination a few days later ;b 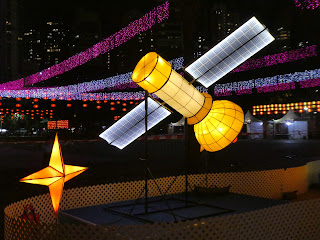 Seeing stars and spacecraft (as well as aliens) at Victoria Park! :)

The day after Severe Typhoon Mangkhut buffeted Hong Kong with winds that were strong enough to get Hurricane Signal No. 10 raised for several hours, I ventured out of my apartment for the first time in some 36 hours to get stretch my legs and get some fresh air.  Over the course of my doing so, I came across scenes of tree carnage (particularly in Victoria Park), instances of dragonflies behaving rather unusually, and two large forms that had their wrappers on but still obviously were meant to look like extra-terrestrial beings with extra big heads!


After I stopped laughing at the sight of them, I quickly got to realizing that these alien representations were supposed to be part of this year's Mid-Autumn Lantern Carnival at Victoria Park.  And while they look rather bizarre, the connection between them and the moon could be said to be as obvious as that between the heavenly body where a goddess is suppose to reside according to Chinese legend and those heavy traditional Chinese baked goods known as mooncakes.  Also, goodness knows that those in charge of deciding the themes for the Mid Autumn Lantern Carnivals in Hong Kong have come up with weirder themes in the past (including the time when giant lanterns shaped like a stick of fishballs and egg waffles went on view at the Mid-Autumn Lantern Carnival!).


A couple of days later, I got the chance to see the alien-themed lanterns and a bunch of others all lit up.  All in all, I reckon that they made for quite the kawaii sight and the sight of the smiley aliens got me recalling a story a teacher friend told me years ago that she and I found amusing -- and also rather illuminating with regards to the mindset of young Hong Kongers.


Over the course of tutoring a couple of 12 year olds, she had decided to ask them as part of their English conversation practice to tell her what they'd do if they encountered some aliens in Hong Kong.  Hailing from the US as she was, my friend expected to hear answers that emphasized the, well, alien-ness of the extra-terrestrials and maybe also their threatening nature.  Instead, those young Hong Kongers -- whose home territory is remarkably crime-free, particularly when compared to other places with a similarly high degree of urbanism -- told her that they'd take the aliens they encountered shopping at the local department store or maybe even to Hong Kong Disneyland!

Clearly, they didn't look upon aliens as threats -- and just assumed they'd be friendly.  Consequently, the natural thing to do would be to be nice and friendly back!  And yes, Hong Kongers are not known for being super friendly but, in all honesty, I do feel that I've found my share of friends -- many of them good ones at that -- over the course of my more than 11 years now in the Big Lychee.  So this Mid-Autumn Festival is as good a time as any to register my gratefulness that this has indeed been the case. :)
Posted by YTSL at 9:34 PM