Hong Kong's on the mend post Mangkhut, and admirably quickly too! 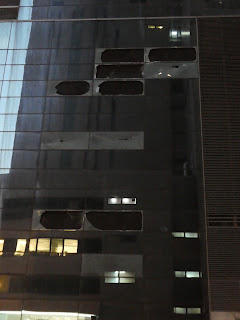 Blown out by Mangkhut :O 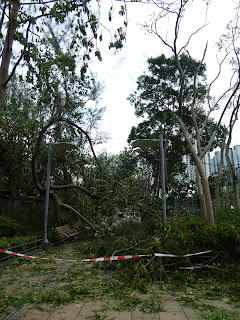 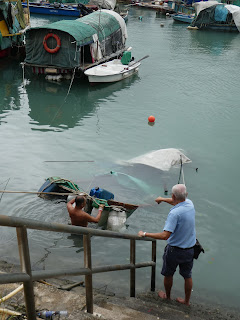 Salvage work underway in the wake of
a severe typhoon's visit
The day after Hong Kong's T10 signal was raised for some 10 hours thanks to the most severe storm recorded by the Hong Kong weather authorities, I expected to see a lot of typhoon damage when I finally ventured out of the apartment I had holed up in for some 36 hours.  And on a walk around what's just a small part of the territory, I most definitely saw that: particularly in Victoria Park, where scores of trees had been uprooted and/or had branches broken, benches were broken, metal railings bent, and several sections of Hong Kong Island's largest urban park were declared unsafe or just plain damaged and subsequently closed off.
During the morning rush hour that day, transport chaos also ensued and, in retrospect, it probably would have been best if the bulk of Hong Kong's workers had been given a day off the day after Severe Typhoon Mangkhut battered the city.  At the same time, it really was a good thing that the workers involved in the mass cleaning up after the typhoon were working, and so very hard, on Monday.  And what they managed to accomplish within 24 hours of the T10 and T8 signals going down to, first T3, then T1 and then being entirely removed, looks close to miraculous.
From the majority of bus routes being suspended on Monday to most, if not all, buses running again on Tueday (albeit with slight detours in some cases because not all roads have been completely cleared of typhoon debris), much of the city looked to be back to normal just two days after Mangkhut shut down pretty much all of Hong Kong on Sunday.  And considering how flooded and trashed the podium garden in my housing complex got on Sunday, it was really amazing to see it so cleaned up this morning that those who weren't here when Mangkhut visited (or, at least, came so close to the territory) would have had no idea how terrible it had all looked just two days ago.
Of course the parts of Hong Kong that were much more severely affected by Mangkhut will take more time to recover.  And even in those areas that didn't make the news, one still can see buildings whose blown out glass windows have not yet been replaced and such.  But when the fire brigade can be seen attending to the damaged trees on the minor road on which I live, like they were this afternoon, my sense is that Hong Kong is most definitely on the road to recovery -- and admirably far quicker to mend than would be the case in so much of the rest of the world if a similar disaster struck.
Posted by YTSL at 11:48 PM