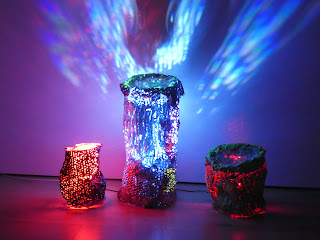 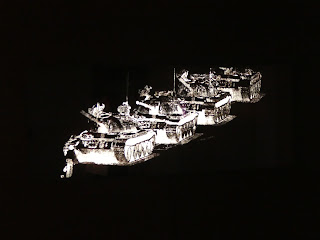 Another piece by the Tibetan artist that's part of his
Knock, Knock solo exhibition 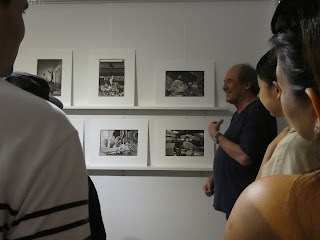 Robin Moyer talks about his photographs on display
at Pékin Fine Arts (Hong Kong)
Years ago, when I lived in Philadelphia, some friends and I would venture to the artsy part of the city on the first Friday evening of each month.  There we'd find the streets where the art galleries were located bustling with people checking out the art on display in spaces which  they'd not think to venture on other occasions and also stuffing their faces with complimentary canapés (and often enjoying them more than the art on view in the galleries offering free food and alcoholic drinks on the night!).
I didn't see any free food at the first of the 12 galleries and artist studio clusters participating in this year's South Island Art Day that I set foot in yesterday.  But alcohol (in the form of chilled cans of San Miguel beer) was on offer along with art works by Tibetan artist Kesang Lamdark and Italian artist Giorgia Vigna at the spacious Wong Chuk Hang premises of the Hong Kong branch of Rossi & Rossi,.
Considering that the art work on display there including images clearly inspired by the Tiananmen Square "tank man" and that bring to attention Tibetan self-immolators along with one showing a woman performing fellatio, it probably was for the best that one didn't have anything solid in one's mouth (and newly churning about in one's gut) when viewing them!  And the day before the opening of the West Kowloon terminus of the Guangzhou-Shenzhen-Hong Kong Express Rail Link designed to more closely link Hong Kong to its behemoth of a northern neighbor, such works served as a reminder that there still is quite a bit more artistic and expressive freedom allowed in Hong Kong than over on the other side of the border between Hong Kong and Mainland China.
At the second gallery I visited yesterday afternoon, I found food, drinks, art and more: specifically, a talk being given by longtime TIME magazine photographer Robin Moyer, whose photographs are the subject of an exhibition at the Hong Kong branch of Pékin Fine Arts whose title is given as My China (1976-Present) on the gallery's website but -- and I don't think it's accidental nor a small matter -- My China, My Hong Kong on the South Island Art Day program.  Again, there was clear evidence of the differences that exist between Hong Kong and Mainland China at this second venue; including in the form of a photo taken at Tiananmen Square in the summer of 1989 which, as the man who took it noted, cannot be shown in Mainland China but can be openly displayed in Hong Kong.
Before I decided to call it a day in Wong Chuk Hang, I visited two other art galleries and one cluster of artist studios; all of which offered more -- and arguably better quality -- food and drinks than either Rossi & Rossi or Pékin Fine Arts, but also had far less interesting and impressive works on show within their spaces.  All in all, it got me thinking when exhibitors know their art isn't great, they try to make up for it -- and make their visitors happy -- with food and drink (including alcohol)!  And since they did try to be nice that way, I'll be nice in turn and not mention their names (but will note them down and not pay visits to these places the next time I go art gallery hopping in Wong Chuk Hang)!! ;b
Posted by YTSL at 10:12 PM

Not sure if this is same but I been on art walk.
Coffee is on

Does an art walk involve walking around to and visiting a number of art galleries (and related spaces)? If so, than I did go on an art walk in Wong Chuk Hang this past Saturday! :)