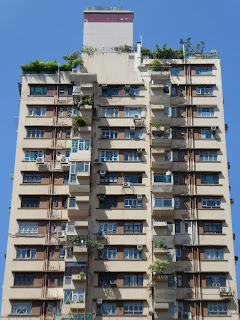 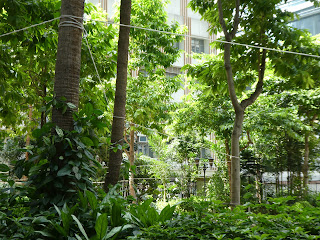 Trees tied up as a safety measure


Earlier this week, Strong Wind Signal No. 3 was raised when tropical cyclone Barijat passed between 100 and 200 kilometers south of Hong Kong.  Kindergartens were suspended on Wednesday morning but life generally proceeded pretty much as usual and when walking about the city, I honestly didn't really feel that it was all that windy for the most part.


A few hours ago, Strong Wind Signal No. 3 was raised again for the second time this week.  This time around, things do feel quite a bit different.  For one thing, when I was outside less than an hour ago, I already felt gusts of wind that were noticeably stronger than normal.  Furthermore, you can feel the tension in the air and see that serious preparations have already been made for the predicted visit of what could possibly be the most powerful typhoon to hit Hong Kong in recorded history.

The strongest on earth this year, Super Typhoon Mangkhut has been sending chills up and down spines for some days now (even while bringing high temperatures in advance of its visit).  We're talking, after all, of a super typhoon that's worse than even the typhoon which brought quite a bit of damage to Japan earlier this month; a good measure of which can be seen by Kansai International Airport's Terminal 1 not being operational until 10 days after the typhoon hit the area and still not expected to be fully operational even after September 21st.

With the maximum Hurricane Signal No. 10 being predicted to be raised sometime tomorrow, hundreds of flights previously scheduled to land at or depart from Hong Kong International Airport have already been cancelled -- and even there even won't be any horse racing at Shatin tomorrow!  On a more mundane note, thousands of windows throughout the territory have had taped fastened onto them (even while others remain untaped since there's some debate whether taping them does any good), trees have been tied to one another (to prevent the trunks crashing into others, I presume) and lanterns which had been installed in advance of the Mid-Autumn Festival later this month have been removed for safety.

In addition, there have been runs in supermarkets and bakeries for food supplies and bottled water, leaving many a shelf bare.  I remember years ago stocking up for a typhoon, only to find that it maxed out as a T8 (Storm Signal No. 8) typhoon and, upon my deciding it was safe to venture out for a bit to get some fresh air and stretch my legs, that the likes of McDonald's and 7-Eleven outlets remain open when the T8 signal is raised!  This time, however, it really does look like it'll be different -- with my fully expecting to be ensconced in my apartment for at least 48 hours, hopefully with electricity, running water and windows intact throughout... :S
Posted by YTSL at 11:43 PM

I didn't know other place tied up trees. We put ropes and or cable sometime on trees and pull them away from building.
Mostly in the winter.
Coffee is on

I've also seen trees tied up in Japan. Often, it's to prevent them falling down. Some other times, they provide the trees with what look like crutches!