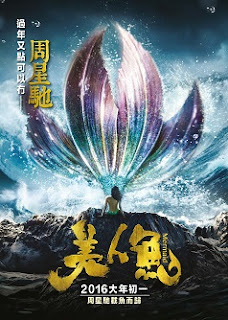 
Last week, this imaginative Chinese New Year film directed and co-scripted (with seven others) by -- but not starring -- Stephen Chow became the highest grossing movie ever in Mainland China.  Shot and set over on the mainland, its four main actresses and actors are native Mandarin speakers (with only one of the three -- Taiwanese singer-dancer-actor Show Luo -- hailing from outside Mainland China).


At the same time though, there's something distinctively Hong Kong with regards to Mermaid's filmic composition and mixing (even transcending) of genres; and many elements familiar to fans of its Hong Kong-born helmer's made-and-(generally) set-in-Hong Kong movies.  Which, no doubt, is why this cinematic offering that successfully combines fun entertainment with thoroughly pertinent messages about human greed and environmental recklessness also has achieved major box office success here in the Fragrant Harbour.


Before the film's winsome titular character first appears on screen, expectations are lowered courtesy of a scene in an unbelievably schlocky tourist trap that looked to be trying too hard and ones featuring filthy rich people vying to make still more moolah, at the expense of others and the environment, that get the main story off to a bombastic start.  In both cases, ugly vulgarity appears to rule the day, albeit in different forms, with the result that the movie and story looked to be crying out for someone, or something, with a nicer nature to be added to the mix.


After billionaire businessman Liu (Deng Chao) outbids his competitors (including one played by  Tsui Hark) to secure a prized property (and to make it really valuable, also get official approval to reclaim the surrounding Green Gulf), he throws an extravagant party at which all manner of females, including his ruthless business rival-turned-partner Ruolan (Kitty Zhang) and a bevy of beauties who'd do whatever is necessary to get their hands on something worth millions of yuan, vie for his attention and affections.


On the face of it, bumbling gate crasher Shanshan (Jelly Lin) has no chance of getting close to Liu.  Still, she does at least succeed in giving him her phone number before she's duly unceremoniously bustled away from Liu's view by his security detail.  And in an eye-catching following sequence, she's shown to not only have hidden talents (that include her being a pretty nifty skateboarder) but, also, a fish-like tail where her legs would be if she were a human rather than a mermaid!


In another twist in the tale, it's revealed that Shanshan actually is a key individual in her aquatic community's plan to assassinate Liu, in a bid to stop ongoing damage to Green Gulf's environment attributed to him.  Predictably though, she's quickly shown to not be the best candidate for the task; seeing as she lacks such as the smoldering anger of the half-human, half-octopus Brother Eight (Show Luo) and -- in the kind of guffaw-inducing slapstick scene that has been the highlight of many a Stephen Chow movie -- proves super inept at being able to make use of the imaginative array of weapons she was furnished with!


In her first ever film appearance, Jelly Lin makes an impressively big splash, and Mermaid's titular character enchantingly endearing.  So wonderful is the still-teenaged actress in her role that one could argue that her presence in this movie that I actually found heartwarming does quite a bit to elevate it in both the qualitative and lovability departments.


Although the characters they play in this work are less endearing, Deng Chao, Show Luo and Kitty Zhang are truly fun to watch and able to make good use of the opportunities they are given to individually shine.  So good are the principal members of Mermaid's cast that I actually ended up not minding much at all that Stephen Chow opted to do all his work behind the camera (this time around).  Another way to look at it is that this film shows that Hong Kong cinema's king of comedy is well capable of ensuring that a movie is funny, full to the brim of those of his trademark touches that thoroughly entertain, and also able -- when he wants to -- of stirring consciences and hearts.

Great review thank you and I'm looking forward to watch this one.

Thanks for reading, and I hope you get to see this movie on a big screen. Was amazed and happy to learn that it's received a (limited) theatrical release over in such as the US and even Ireland. :)

Saw this last Saturday afternoon in an almost full, albeit small, cinema. I'm glad to see Stephen Chow still making films in his own style, even when they are filmed in Mandarin, in mainland China with mostly mainland actors.

Clearly there were some jokes that don't translate well - people around me were laughing hysterically during scenes I found only mildly amusing.

But, all in all, completely bonkers, very funny and full of wonderful visual and physical comedy.

I'm glad you got to see the movie in a cinema, and that you like it! Were there any scenes in "Mermaid" that had you laughing hysterically? For myself, what amazed me -- and really made me like the film -- was that I also felt moved/touched by certain sections of it.

I did laugh out loud several times at the mermaid's inept attempts to kill Liu Xuan, the octopus as a sushi chef etc. (maybe not hysterically, though).

And yes, great to be able to see this in the cinema. I don't know how long this has been going on, but only last month I discovered that Odeon Panton Street, a modest four-screen cinema just a couple of blocks away from the glitzy, expensive cinemas of Leicester Square, is showing loads of Chinese films. Already this year they've premiered Ip Man 3, From Vegas to Macau 3, The Assassin, The Monkey King 2 and The Mermaid.

I have already been to the cinema more times this year than in the past ten years added together (not counting Hong Kong, of course). I hope there's more to come.

Cool re your laughing out loud several times when watching "Mermaid". I have to say that there's nothing that beats being in a cinema when everyone's laughing together at successful attempts to be funny. :)

It's great to know that there's at least one cinema in London, however modest, which is showing Hong Kong/Chinese-language films in 2016. Long may that situation last!

I enjoyed this film too. Wish Stephen Chow was in it though.

By the way, will you be covering the HKIFF this year? What are some of your must-see films?

I'm glad you enjoyed this film too. A question for you: Which character do you think Stephen Chow w/should have played if he had been in "Mermaid"?

And yes, I'll probably cover the HKIFF this year... have bought tickets to 19 screenings, including "Chungking Express" and "The Eagle Shooting Heroes" (the two movies I absolutely want to see on a big screen at the HKIFF!). Of the new offerings, I hope the two Herman Yau films ("Nessun Dorma" and "The Mobfathers") turn out to be good, ditto with the Wayne Wang film which stars Takeshi Kitano ("While the Women Are Sleeping"). :)

I think Deng Chao's character, who is very much like Chow himself - successful and 'invincible' but also lonely and empty.

Interesting comments re the similarities between Deng Chao's character and Chow himself. Am glad that Deng Chao played that character in the movie though because the age difference between Stephen Chow and Jelly Lin would be too creepy... ;S

I think if Chow was to play Deng Chao's character, Jelly Lin's character would be played by an actress like Shu Qi. In fact, in some scenes, Lin looks like a young Shu Qi.

Urgh! Shu Qi (or Hsu Chi, as I prefer to spell her name since she's Taiwanese, after all)! I'm glad that Jelly Lin starred in "Mermaid" rather than her, and that Stephen Chow had the good sense to resist the urge to play the Deng Chao character and, instead, let a younger man do so. ;)