The journey continues in The Monkey King 2 (film review) 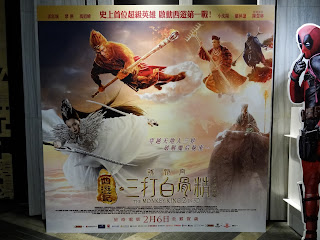 Advertising for The Monkey King 2
(with a cameo by Deadpool ;b )


Two Chinese New Years ago, Donnie Yen had the lead role in -- as well as was the action choreographer of -- star-studded fantasy actioner The Monkey King while Aaron Kwok had second billing as the villainous Bull Demon King.  Although that majorly ambitious cinematic rendition of 16th century writer Wu Cheng'en's Journey to the West was a mega commercial hit in Mainland China (and also performed well at the Hong Kong box office), it also was the recipient of many critical brickbats.  Consequently, it looked to have been decided by the powers-that-be that some things had to be different when making its promised sequel.


Perhaps the most noticeable change with regards to the follow-up production is that this time around, Donnie Yen is no longer in the picture; replaced as action director by Sammo Hung and as Sun Wukong (aka the Monkey King) by the man who had played the first film's chief antagonist.  Absent too from The Monkey King 2 is Louis Koo; this despite the character he looked to have been slated to play, master monk Tang Sanzang, having a prominent role in this movie along with his two other disciples besides Sun Wukong, Bajie (Xiao Shenyang) and sand demon Sha Wujing (Him Law) -- who I had known as a kid (via the 50 volume Journey of the West comics I eagerly devoured) as Pigsy and Sandy respectively.

In normal circumstances, one would think that William Feng Shaofeng has the greatest chance to shine of all the film's cast; seeing that, his role as the idealistic holy man tasked with going to India to get a set of Buddhist scriptures is the least encumbered by weird makeup and prosthetics of any of the movie's principal characters.  But Feng ends up being upstaged not only by Aaron Kwok but also Xiao Shenyang (who is fun to watch both as the handsome version of Bajie and the one with piggy ears and snout!) -- and, most of all, Gong Li, who is absolutely mesmerizing as the White Boned Demon out to ensnare and eat Tang Sanzang, whose flesh she believes will make her immortal.


While the likes of Chow Yun Fat (who played the Jade Emperor) and Gigi Leung (who appeared as the Moon Goddess) helped give viewers of the first Monkey King film lots of familiar faces to gaze at, none of those luminaries put in the kind of truly commanding performance that a genuine megastar can when he or she chooses to really light up the screen.  Gong Li, however, does precisely that in The Monkey King 2, and the production benefits ever so much from her doing so.

Also much improved from the first film are the visual effects.  While the 2014 offering appeared to have been overly rushed to be ready for that year's Chinese New Year slot, director Soi Cheang and Co look to have been given more, and sufficient, time this time around to get things right.  And although the tiger that appears in the opening minutes of this fantasy adventure epic would have benefited from more work, other fantastic creatures like the dragon that get turns into Tang Sanzang's steed as well as the White Bone Demon's CGI accoutrements are several steps up in quality from what was on view in the earlier Monkey King movie.

Less successful, however, were the changes effected in such as the scriptwriting and editorial departments -- with the personnel being different but the old problems of an overly simplistic story and plodding pacing remaining.  Thus it was that even though there were times during The Monkey King 2 when I did marvel at the amazing imagery unfolding on the big screen on which I viewed this movie, there also were moments when I was unable to stifle my yawns and certain occasions when I couldn't help rolling my eyes at certain elements in this work (including Kelly Chen's reappearance as the Goddess of Mercy).


To summarize then: The Monkey King 2 is an improvement on the first Monkey King movie, particularly in terms of its visuals.  But while it entertains in places, it's still far from being the monstrous success that its pedigree (in terms of source material, star power, etc.) should pretty much guarantee that it would be.  Furthermore, this second film's final scenes point to a third Monkey King movie being in the offing but I think we've already been shown that things don't always go to plan -- and sometimes it may be better that this is so!

Going to see this on Saturday. It'll be only the second 3D film I've ever seen - I hope I'll enjoy this one.

I haven't seen the first Monkey King film yet - I'm planning to watch it before the weekend.