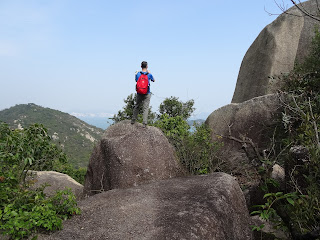 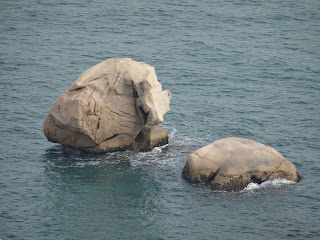 It's not only me who thinks that the rock to the left
resembles a pig trying to get up from the water, right? ;b

Click to enlarge this photo of a view bonanza that takes in
the neraby island of Cheung Chau! :)
Compared to Hong Kong's four major long trails (i.e., the 50-kilometer-long Hong Kong Trail, 70-kilometer-long Lantau Trail, 78-kilometer-long Wilson Trail and 100-kilometer-long Maclehose Trail), the Chi Ma Wan Country Trail may seem like not a big deal to try to go along.  But it's worth bearing in mind that southeastern Lantau hiking trail is 18 kilometers in length, goes steeply up and down at least two hills, and is estimated by the authorities that set it up to require 8 hours to complete.
Since I don't like to hike for more than five hours at a time, I would never consider completing the Chi Ma Wan Country Trail in one go.  But thanks to my discovering the existence of some other trails on the peninsula that connect with this officially named hiking route, I have been able to complete my exploration of the entire Chi Ma Wan Country Trail in three interesting parts.
By far the most demanding of my hikes along sections of the Chi Ma Wan Country Trail was the one that involved an ascent up 302-meter-high Miu Tsai Tun and a descent down a fair amount of the hill, then going uphill and down some more before scaling up 303-meter-high Lo Yan Shan and down to Lung Mei.  And while the two other hikes that go along a more coastal route are no where as challenging, they too are far from boring -- in large part because there are scenic views and interesting rocks to check out along the way.
Although my hiking companion on all three of these hikes reckons that the one along the western of Chi Ma Wan Peninsula has the more interesting geology, it was actually on today's hike --  in the southern section of this body of land which, when viewed from certain sections of Cheung Chau, can look like a separate island from Lantau, that we passed through the scenic area known as "rock wonder".  Also, while I was prepared to see lots of interesting rocks this afternoon, I found myself being quite a bit more impressed by the views from the trail of such as the nearby islands of Hei Ling Chau and Cheung Chau.
Despite today's weather forecast including some haze in the afternoon, we lucked out and got pretty high visibility -- along with beautiful blue skies -- over Chi Ma Wan and its surroundings.  And for the second day in a row, it was warm enough at some points in the day for me to remove my windcheater and sweatshirt, and enjoy the feel of the sun on my arms!  What with some butterflies being seen flitting about for the first time in ages as well, it felt like spring had come -- though it did get rather chilly again later in the day and after darkness fell once more.

We may now be able to see that we've gone along the entire Chi Ma Wan Country Trail but my hiking friend and I sure aren't going to stop visiting the Chi Ma Wan Peninsula.  It may not be the easiest place to get to but it sure is very scenic.  And my friend and I already have a fair idea of our next hike destination on the peninsula: the attractive-looking beach on the shore of a bay that's one of four in Hong Kong -- and one of two on Lantau -- named Tai Long Wan! ;b
Posted by YTSL at 11:27 PM