Not your average pie (filling) at Godenya! 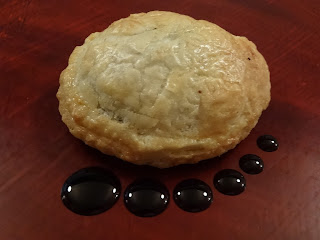 A mini pie I was served at Godenya this past Monday 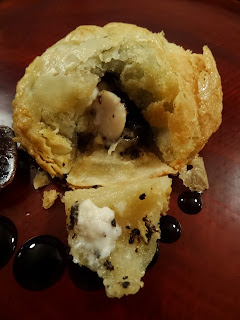 The delicious mini pie had an ultra unusual
combination of fillings 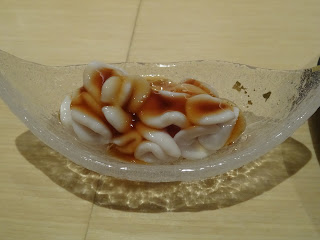 Something capable of causing a stir even when
served at an omakase dinner at a top sushi-ya ;b


Back when I was a first year student at Beloit College in Wisconsin, I befriended two classmates who both hailed from Missouri: one of whom pronounced his state's name as Miss-ssouh-ri and the other as Miss-soo-rah.  I was further intrigued to find that the former considered his home state to be part of the Midwest while the latter was equally adamant that his home state was part of the South.


Differences cropped out again when discussing what they thought was the most American of pies: with the fellow who identified himself as a Midwesterner opting for those with apple fillings and the guy who saw himself as a Southerner favoring those with pecans!  At the same time though, I'd wager that pies were something they both tended to look upon as sweet things to be eaten as a dessert course (or a snack) rather than as a savory main dish -- the way that the British with their steak and kidney (or steak and mushroom) pies, shepherd's pies and such would do.


And I can totally imagine most American and British diners going into shock if they were presented with the mini pie that was my favorite course this past Monday at Godenya -- and was part of a meal that I actually generally enjoyed even more than the one I had the first time I ate at this far from average Japanese restaurant whose food contains some French and Cantonese touches.

Billed as "milt pie black truffle sauce" on the menu, this playful dish consists of what the Japanese call shirako and black truffles encased in a puff pastry.  While the friend I was having dinner with and I joked about how many people unfamiliar with the word "milt" may think it was a typo and that the listed ingredient was actually milk, the fact of the matter is that shirako is not something many people encounter on menus outside of Japan  -- and most definitely not in combination with truffles (black or white) and puff pastry.


We're talking, after all, about cod fish sperm -- yup, "milt" is a... nicer word for sperm!  Just like shirako (which apparently means "little children") is the euphemistic Japanese word for fish sperm!  And yes, for the record, I fully knew what I was eating -- and I actually really do like it a lot; particularly in this case, where shirako's creamy taste and buttery texture, combined with the meaty flavor of the black truffles, made for a decadently rich (mini) pie filling!

More than incidentally, the owner of Godenya estimates that 3 out of 10 of his customers refuse to eat shirako, and those who refuse to do so are almost uniformly male as well as not Japanese.  I must admit to wondering whether this is a sign of homophobia on these folks' part.  I also am a bit puzzled as to why it is that there aren't as many reported cases of men objecting to eating the "roe" of male Shanghai crabs: for surely it can't simply be that this is because fewer folks realize that that too is actually sperm?! ;b
Posted by YTSL at 11:50 PM

I tried this too - without knowing what it is. And hands down, it was the best course at Godenya that evening. The taste is amazing, the puff pastry so light and rich and then in combination with balsamic drops... to die for. I don't care whether it was sperm or not, it was truly a fantastic combination and I did try and ask the owner for a second helping! :)

Ooo, so you've been to Godenya sometime this month! Was this your first time at that restaurant? My dining companion that evening and I told the owner that he should consider making that pie an a la carte option. I'd happily have a lunch consisting of just it, the prawn drink (I think you know what I'm talking about) and some sake... ;b

Yes - it was my first time, but i will be back for more ... the menu is really intriguing and I loved the atmosphere. The owner was a great dinner companion, he said as much and as little as we wanted/needed to accompany each dish, and of course, the more questions we asked, the happier he was to answer! We didn't have the prawn drink... we went on a Friday two weeks ago, clearly the menu changes a little throughout the month. I am already trying to get hold of a seat in April/May!

I was there on February 15th -- so the same week as you, only a few days earlier! Yes, the menu appears to be extremely seasonal. I love that there were no dishes that were the same between my first and second meals there (though both meals did start with a refreshing dish that included a jelly type concoction). If only meals there weren't so pricey. Still, it does feel worth going to every few months or so, doesn't it? ;b