Getting into the Chinese New Year spirit in Hong Kong 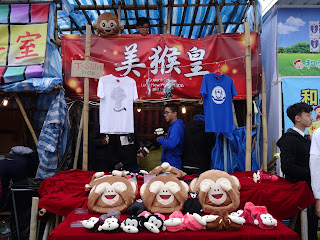 Guess which animal in the Chinese zodiac's
year is coming up... ;b 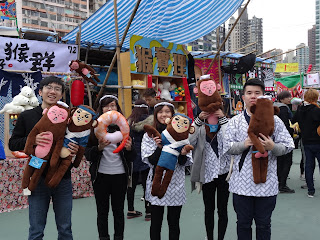 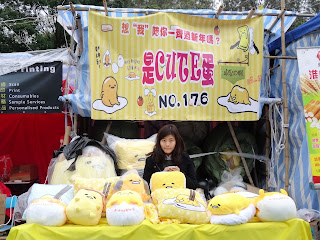 Maybe Hong Kongers' love of food accounts for that
giant prawn, and the current great popularity of Gudetama? ;b 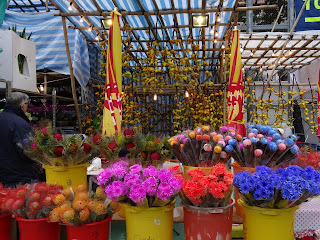 And yes, there are flowers for sale at the Chinese New Year
flower markets (as well as lots of other stuff)! :)

A little less than a couple of weeks ago, an American friend of mine who moved to Hong Kong less than a year ago asked me whether there'd be Chinese New Year decorations about town the way there was/is for Christmas and the Western New Year.  When I met again earlier this week, she had seen enough to know that this most definitely the case, and actually on a wider and larger scale.

And this despite her not having even dared to venture into Victoria Park to check out the Chinese New Year Flower Market (post finding the crowd to be "insane" already during last year's Hong Kong Brands and Products Expo)!  On the other hand, despite my usually not ending up buying anything there, I still do make a point to spend time checking out what's on offer at this festive market -- because, if nothing else, it can be a photographer's delight and an occasion where one feels able to tap into the festive zeitgeist.

As is to be expected, the non-flower half of the market is dominated this year by monkey-themed items -- plushies, decorative items, clothing and the like.  In addition, Gudetama is very much the Sanrio character of the moment -- even though Hello Kitty is (of course!) still pretty well represented at this festive fair.

This being the time where people are inclined to be generous, political parties have stalls at the Chinese New Year flower market and are hoping for donations along with various charities.  It may seem to be against the festive mood to see a stall reminding people of the events of June 4th, 1989, and others effectively trading on the unpopularity of the individual known as 689 but I, for one, am heartened to see Hong Kongers continuing to exercise their rights to publicly rememember what happened in Beijing in the summer of 1989, voice dissent against their political rulers -- and, particularly this year, sell books that are allowed to be published and sold here (but are banned over in Mainland China).

On the subject of Mainland China: Years ago, a Beijing-born friend of mine told me that many contemporary Mainland Chinese don't have knowledge of Chinese New Year customs and traditions observed by many ethnic Chinese people in Hong Kong, Taiwan and further afield.  This is due in no small part to it being so that during the Cultural Revolution, such cultural knowledge and practices were banned and suppressed.  Consequently, now, when they are allowed again, many people don't know such as who's supposed to give red packets (lai see), who's supposed to receive them, how to politely hand them over, how to politely accept them and such.

To be sure, some Chinese New Year customs and practices are couched with superstition and can seem illogical, even ridiculous.  Still, there's a difference between knowing about something and deciding against enacting it versus not doing something because you have been deprived of the knowledge of customs and traditions that have been handed down multiple generations of people who you're supposed to feel strong cultural connections with.

Also, some of these festive customs actually are fun -- and help reinforce ties with others.  And, sure, it can feel painful to give at times but there are times too when it's wonderful to do so: which is why one of the Chinese New Year practices I heartily endorse involves donating to a charity like the Society for Community Organization (SOCO) or Food Angel at this time of the year.

In view of the 2016 Chinese New Year period being predicted to be on the cold side weather-wise, I'm thinking that it threatens to be unpleasant for those who are homeless and/or unable to warm themselves with such as heavy coats and blankets.  So please spare a thought for these folks -- and if you are so inclined, please donate to a worthwhile charity as part of your festive commemorations and celebrations!
Posted by YTSL at 6:05 PM

HI YTSL -- Thanks for linking to my post! With the saga of the booksellers still going on, that stall selling those politically sensitive books should be doing good business this year!

The photos in this post are certainly a spirited start to the Year of the Monkey. Let's hope this simian-based year doesn't hold too many mischievous surprises for we humans.

As always, I enjoyed all of your hiking posts during the past year.

It was a year of at least two all-time great Puppet Ponyo photos: 1)In a Tromso aquarium, Puppet Ponyo and a sea lion stare at one another in rapt curiosity! 2)From a window in a museum in Amsterdam's red light district, Puppet Ponyo looks at the activity below her on the street. This is one of her more cinematic poses that for some reason got me thinking of Hitchcock's Rear Window!

You're welcome! BTW, saw the books also being sold at a stand in Causeway Bay, near Times Square, this afternoon. Good on those for keeping those books available for sale against the odds!

Hold on to your horses...it isn't the year of the monkey just yet (though it may well be by the time you see this response to your comments!)! ;b

I'm glad you enjoyed so many of my blog posts in the year of the goat/sheep/ram! And yes, I love those Puppet Ponyo photos you mentioned too. Another favorite Puppet Ponyo pic from the past year: the one taken at Cape Hinomisaki. :)