Monkeys behaving badly -- and/or true to their nature? 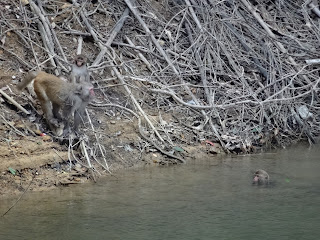 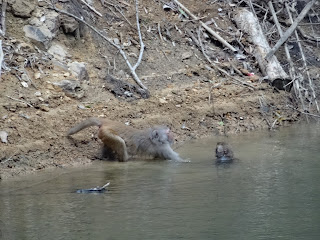 A monkey in the water's unusual enough but whither
a monkey wielding a stick against another?! :O
What is going on in Hong Kong this year?!  On the human front, there's been such as the chicanery that's made five Hong Kong booksellers "disappear" (including from Thailand and Hong Kong), only to be reported as now being in custody over in Mainland China and the clashes in Mongkok early on in the Year of the Monkey that some have taken to calling the "fishball revolution".
Over on the weather front, we've had unusual sub-zero temperature days when it's been colder here in the Big Lychee than, say, Amsterdam or London -- and at least one day which saw "frost tourists" needing to be rescued from high ground (and their own idiocy) by the emergency services!
And now this afternoon, I was one of the people who witnessed deviant behavior by a group of monkeys that showed them to be genuinely scary and far from attractive wild creatures rather than the cute critters that you'd want a plush toy version of or want to be the lead character in a movie.

To cut to the chase: while the two friends I went hiking with today and I were standing on the banks of Shing Mun Reservoir, we noticed a commotion nearby.  Loud screeches filled the air as a group of monkeys came flying into view.  Soon, it dawned upon us there a bunch of monkeys were chasing one of their own, and that they weren't playing games.
In a bid to stop itself from being attacked, the lone monkey that looked to have drawn the ire of the others leapt into the water -- something that members of its species aren't wont to do (bar to escape from predation).  None of its pursuers deigned to follow suit.  Neither did they melt back into the woods.  Rather, they actually lay in wait for the pursued monkey to come out of the water and get back on land.
In the short time that I -- who was scarcely able to believe my eyes -- watched the drama unfold, the target of the other monkeys' ire tried a couple of times to get out of the water, only to be pounced upon by some of those which seemed intent on murdering, not just maiming.  At one point, it actually looked like the hapless victim was going to be torn apart by two other monkeys.  But somehow, it managed to get away from their grasp and back in the water.
Not wanting to be witness to a death (even of a monkey), I decided that I should stop watching and return to hiking.  Just before I turned away from that scene, I saw something that looked like it belonged more in a movie (like, say, Dawn of the Planet of the Apes) than normally occurs in nature: a monkey picking up a stick and wielding it the way you'd expect a human to do so when threatening to beat the shit out of another!

In an introductory physical anthropology course I took at college decades ago, I learnt that the discovery by Jane Goodall in 1960 that chimpanzees use and make tools was so revolutionary that it required a redefinition of humans.  But what struck me when watching that stick-wielding monkey wasn't just how human it seemed but how much of a beast it really was.
One would like to think that if that had been a human group I had seen, eventually at least one individual would see sense, rein in his/her murderous impulse and persuade the others to do the same, so that the situation could eventually be resolved without a fatality.  As it was, I fear that there's no way that little monkey was going to survive for much longer.  Instead, its possible fates -- all of which are bad -- appear to involve drowning, freezing to death (because it actually was pretty cold out today -- as in, I actually had a scarf on for part of today's hike!) or being killed by one or more of its own kind. :(
Posted by YTSL at 11:58 PM

The monkeys in Hong Kong is a problem we created ourselves. It is no longer cute to have so many monkeys around.

I don't think there ever was a time when monkeys were cute -- they are wild animals that can act pretty beastly, after all. I do agree though that the monkey problem in Hong Kong is created by humans -- the colonial authorities for introducing them to Hong Kong, and those folks who go feed them (despite it being against the law) for helping them to proliferate in these parts.