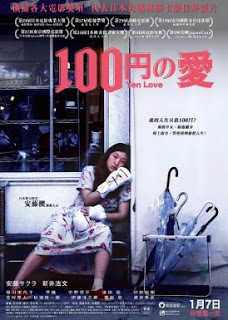 A film that wears its low budget on its sleeve? ;b
100 Yen Love (Japan, 2014)
- Masaharu Take, director
- Starring: Sakura Ando, Hirofumi Arai, Tadashi Sakata
Its title makes it sound like a cheap romantic flick but Masaharu Take's 100 Yen Love actually is a quirky drama about a 32-year-old Plain Jane who goes from playing boxing-themed video games to contesting an actual, competitive boxing match against an experienced opponent.  Japan's foreign language film Oscar nominee in 2016 (rather than the more pedigreed likes of, say, Hirokazu Kore-eda's Our Little Sister), this low budget indie offering didn't make the final cut but still makes for an intriguing watch, particularly for those like unconventional works with idiosyncratic anti-heroes and atypical endings.
Lead actress Sakura Ando powers this film with a compelling performance as Ichiko, a 32-year-old female who first appears as a big-bottomed slob and sloth given to slack off while her mother (Miyoko Inagawa) and sister (Saori) work hard at the family bento store.  After a messy row with her sister, the slovenly deadbeat decides to leave her family and strike out on her own, moving into a tiny apartment with next to zero furnishings.
Despite having no work experience besides whatever she was tasked with doing at the family store, Ichiko manages to get a job at a nearby 100 yen store she previously had been a customer of.  Assigned the night shift, she comes into regular contact with oddball characters like a big-talking fellow employee who thinks he's a silver-tongued devil (Tadashi Sakata), an eccentric homeless woman who gets expired items from the store (Toshie Negishi) and the moody individual nicknamed "Banana Man" (Hirofumi Arai) by the other store employees because bananas seem to be all he ever buys at the store.
Ichiko first spots "Banana Man" training at a neighborhood boxing gym.  Although she didn't know it at the time, both the man and that gym would go on to play important parts in the development of the 32-year-old virgin into a motivated boxer spoiling to get into the ring and take part in a contest that would give her the chance to be a winner for once in her life.
Watching Ichiko transform from lazy bum to a hard-training sportswoman with a scary glint in her eye is amazing; not least because Sakura Ando is utterly believable when portraying both a low-energy misfit and a boxer taking part in some of the most hard-hitting ring action I've ever seen on film.  Knowing that 100 Yen Love's main actress trained at a boxing gym in junior high school helps explain how her boxing training scenes -- as well as her fight scenes -- appear so authentic.  But this makes it even more incredible that she could be so convincing as an unhealthy and pretty physically unattractive female for much of the movie!
At various times while watching this film, and in the days and weeks since viewing it, the thought has kept on crossing my mind that this is the kind of movie that Hollywood just wouldn't make.  It's not just that its protagonist is female but that she's not all that likeable or sympathetic for much of the movie.  And then there's 100 Yen Love's very unHollywood-like ending: one that leaves quite the impact, and even make the viewer feel emotionally bruised and battered, even if not actually down and out for the count!
My rating for this film: 8.5
Posted by YTSL at 9:31 PM