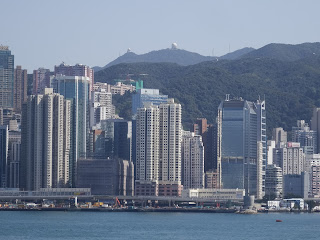 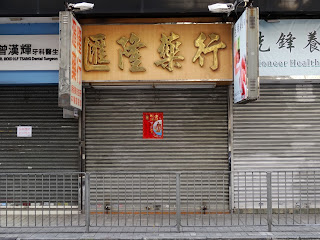 Many businesses (including medical and dental clinics)
remained closed for the holidays
This morning, I woke up to news that there had been trouble in Mongkok late last night: not of the Triad variety like in many a movie set in that part of Hong Kong but, instead, between the police and protesters angered by a government decision to clear the area of unlicensed food hawkers.  The "fishball revolution", as it has been quickly dubbed, may sound like a joke but far less serious is the news that police officers actually fired their guns twice during the event.  (And to those who say they only fired into the air, this action is serious because the guns had live ammunition -- not rubber bullets -- in them and the Hong Kong police usually aren't a trigger happy lot.)
In all honesty though, if I hadn't read the news, I wouldn't have known that anything untoward had happened in the Big Lychee last night.  And, actually, all the parts of Hong Kong that I was in today (including North Point, Tsim Sha Tsui and Causeway Bay) were much as one would expect during the first couple of days of Chinese New Year: quiet, with a number of shop closed for business and their fronts shuttered even, but only because the management and staff are on holiday themselves rather than because of a fear of rioting and such.
Every so often today (and yesterday), I noticed tourists standing near closed shops and restaurants with bewildered looks on their faces -- and was reminded at how incredulous I was when I visited Haarlem on January 1st this year and found so few businesses opened in that Dutch city.  Still, at least in Hong Kong, the tourist information offices are open today and even quite a few tourist attractions and major places of worship (like the Man Mo Temple on Hollywood Road, and Wong Tai Sin Temple over in the Kowloon district that bears its name) too; so those foreign visitors don't have it so bad as my German friend and I did in Haarlem that day!
And because many -- if not all -- of the factories and such over in Mainland China also are closed for Chinese New Year, the winds from the north that normally prevail in Hong Kong during the winter months have not brought even a smidgen as much of air pollution as often is the case when millions of people are hard at work over on the other side of the Hong Kong-Mainland China border.  Indeed, many of us over here in Hong Kong got to wondering whether the holidays had begun early up north when beautiful blue skies appeared over the Big Lychee as early as this past Friday, three full days before the Year of the Monkey came along!
With so many people obviously enjoying the past few day's gorgeous skies, high visibility and clean air, what a pity it seems to me then that Chinese New Year celebrations aren't complete in the eyes of some without a grand fireworks display.  At the risk of sounding like a killjoy, I wonder how much air pollution was created by the 4.5 million tons of fireworks let off over Victoria Harbour this evening?  (And lest anyone wonder: of course, I didn't bother to watch the pyrotechnics; instead, I was in a cinema watching a Chinese New Year movie when that fireworks show was taking place! ;b )
Posted by YTSL at 11:47 PM