Making a difference against the odds? 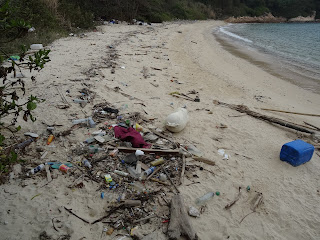 It'd seem to be an impossible task to clean up this beach, right? 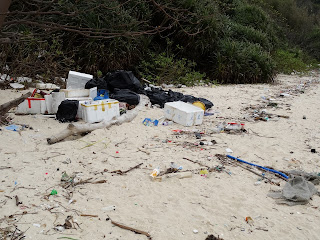 Adding to today's work was the trash we collected the previous
month not having been picked up the relevant government
authorities and turning into added mess :( 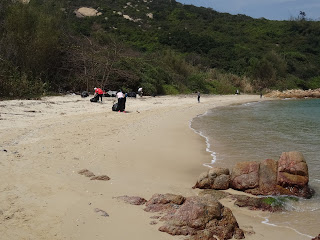 In view of this, I think we actually did a pretty good job
of cleaning up the beach this afternoon!

Shortly after I joined meetup.com last year, I started taking part in beach clean-ups on Cheung Chau.  Organised by the wonderful Rija of Green Sustainable Living Hong Kong, they take place monthly -- and although we've gone once to Pak Tso Wan (AKA Italian Beach), over in southwest Cheung Chau, we've thus far largely focused our attention on cleaning up Coral Beach (AKA Tung Wan Tsai), located over on the northeast of the island, where the tides appear to wash up a lot of rubbish from mainland China as well as Hong Kong.

With last month's turnout being the largest since I started taking part in the beach clean-ups, I was hoping that Coral Beach wouldn't be terribly dirty when we headed over there this afternoon -- but sadly, this was far from the case.  The sight that greeted us when we got there was the kind that can sink nature lovers' hearts; what with there being rubbish all over the beach, with such as styrofoam boxes, plastic and glass bottles, junk food wrappers and medical equipment among the usual detritus, and far more plastic bags strewn about the place than I had previously seen.

If this was not bad enough, consider that the large (plastic) bags that we had filled with trash at last month's beach clean-up had not been picked up by the relevant authorities, as was supposed to be the case.  And to add to the ugly picture: some of those bags had been torn -- by environmental degradation or some of the feral dogs that Cheung Chau is known to have -- and now had rubbish coming out of their holes.

Fortunately, the group had been supplied with plenty of plastic bags as well as gloves once more -- and after Rija and I repacked some of the old trash, things didn't look quite so bad.  Even better was that our clean-up "team" today of just eight people actually managed to make a visible difference to the landscape with a couple of hours or so of "work".

In all honesty, it's been edifying to find out how much just a few people are able to accomplish in a short period of time, and that discovery has instilled in me the willingness to keep on taking part in these beach clean-ups for some time to come.  At the same time, I'm a believer in there being strength in numbers.  Consequently, I'd like to encourage those of you reading this blog post to do the same (or something similar) because: yes, the environment matters; and yes, you really could -- and can -- make a difference (and, of course, engaging in such as recycling and using fewer plastic bags would be good, and helps too)!
Posted by YTSL at 10:29 PM

Tung Wai Tsai is notoriously untidy. You could find most anything and everything there. But I guess you have not seen the worst yet. Wait till the next typhoon.....

A few years ago when I first went there, there was even a small shipwreck, with entangled fishing nets.

Ah, that time I also saw the body of a pig, still looking fresh. Likely being washed ashore not too long ago. On the other hand, there are some wild dogs in that area. Beware when you go there.

Kudos to you and the others for being so dedicated in picking up the garbage washed onto the shore or left by others.

HI YTSL -- Good job! If the government doesn't pick up the garbage, you should contact 1823 to tell them to do so. Better yet take a picture of the garbage they haven't picked up and upload it onto the 1823 website. The government needs to do its part too.

- good of you and Rija for clean up the beaches effort.
- seriously consider buy and consuming less (including food packaging) because what you buy leads to the packaging

- push harder for recycling in HK, HK recycling is a joke (and so is the **HK gov't is a joke**) considering HK just started to recycle glass. (where I am almost everything is recycled; from paper/plastic/glass to electronics to motor and cooking oil to household chemicals...)

"Untidy" is a nice word to describe Tung Wan Tsai's state! And yes, I've indeed seen a wild dog in the vicinity -- though, thus far, no dead pig, "only" a few dead fish. ;S

Thank you. And as a friend of mine remarked earlier this week (about something quite different), there's power in numbers. It's great to have other people to do the beach cleaning with. :)

Thanks for the tip. Rija's in communication with the authorities and I'm sure he's already contacted them to tell them to please pick up the bags we filled yesterday as well as the old ones from last month.

I know, I know... there's still so much to do. But I'm heartened that there are people in Hong Kong willing to do such as the beach cleanups, etc. As for the glass recycling: At least these days in Hong Kong, it's easier to find glass recycling bins. Apparently, glass recycling already existed when I moved here around 9 years ago now. It just was really difficult to find a place to deposit the glass bottles, etc. for recycling!

For Tung Wai Tsai, I don't even know which government department is responsible for clearing of the bin. I could not recall there are any rubbish bins down there. Maybe in one of the pavilions around the area.

It is not a regular bathing beach thus it may not be the LCSD. Would it be HAD? I am really uncertain. Or would it be AFCD instead?

Maybe someone should give the local district board or village council a kick on this.

Yup, there are no rubbish bins at Tung Wai Tsai, and no government cleaners assigned to it. Also, you're right that it's not a regular bathing beach (i.e., has no life guards assigned there) and not being under the LCSD.

Rija liases with the Food and Environmental Hygiene Department (FEHD) re getting people over to pick it up (using a boat as going there otherwise involves climbing up a hill before descending down once more to sea level).

On a different note: saw some good looking brussels sprouts at the Central branch of Marks and Spencer this evening and thought of you! (Puzzled readers can go to the comments thread for my Little Bao blog entry ;b)