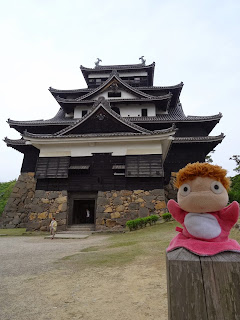 Puppet Ponyo poses in front of Matsue Castle ;b 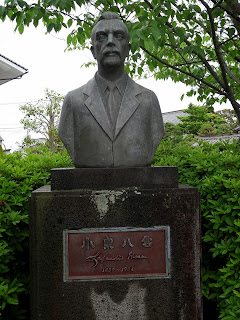 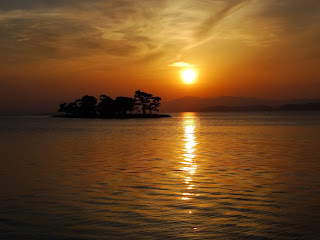 Viewing sunsets is a big deal in Matsue
-- and I hope this photo gives an idea why! :)

For many tourists and travellers, "Japan" is pretty much just Tokyo and Kyoto -- and the first time I visited the Land of the Rising Sun, back when I was 14 years old, with a tour group led by an uncle who worked as a tour guide), those two cities were indeed on the intinerary.
But even on that first visit, I realized that there's so much to this amazing country than just those two famous destinations; not least due to the tour including stops at Mount Aso (though it wasn't until years later that I managed to get up to the top of the active volcano) and Nagasaki (which is inextricably associated with the atomic bomb that was dropped on it).  And in the years since, I've visited a number of other parts of Japan that many people outside of the country have never heard of (e.g., Shirakawa-go) and whose mention causes more than one Japanese person I've said it to to laugh out loud, seemingly in disbelief (notably Kokura and Dazaifu).
Although Matsue is reputedly a favorite travel destination for many Japanese, it is apparently another unlikely place for non-Japanese to venture to.  One reason for this is that this city on Honshu's San-in Coast is not the easiest to get to for international visitors. To give an idea of what I mean: after flying into Kansai International Airport (the nearest major airport to Matsue) on a three and a half hour flight from Hong Kong, I spent five and hour hours on three different trains -- a Limited Express train from the airport to Shin Osaka, the shinkansen (bullet train) from Shin Osaka to Okayama, and another Limited Express train from Okayama to Matsue -- to get to my main base for this vacation!
When asked why I had chosen the capital city of Shimane Prefecture to visit this time around, I mentioned Matsue-jo (which, like those at Himeji and Bitchu-Takahashi, is one of just 12 original castles left in Japan) along with Matsue's relative proximity to places such as the UNESCO World Heritage-listed Iwami Ginzan silver mine and its cultural landscape, and the sand dunes of Totorri. And Matsue's castle was indeed one of the places I visted on the first day of this recent Japan trip.
Constructed in the early 17th century by a local lord after the last great war of feudal Japan, Matsue-jo never saw battle despite being designed for warfare (rather than primarily as a residence, as was the case with many other castles).  Although its keep looks deceptively "squat", Matsue's is the third tallest as well as second largest of the 12 original castles, with splendid 360 degree views of the city and is surroundings are to be had from its top floor -- accessible via increasingly steep wooden stairs.
Two other places I visited on my first day in the castle town (really just a half day, since I got in after 1pm) had associations with a man who wasn't born in the city, didn't die there and, in fact, only lived there was around a year.  Greece-born Lafcadio Hearn is nonetheless considered a favourite son of Matsue -- with tributes to him to be found in many parts of the city that he loved and wrote about, including the Lafcadio Hearn Memorial Museum (curated by his great-grandson Bon Koizumi) and the local craft brewery (whose brews are labelled Beer Hearn!), both of which are within walking distance of Matsue-jo.
At Matsue Castle, I noticed that there was a board on which the time of the day's sunset had been posted -- and got to gathering over the course of my stay in the city that sunset viewing's a big deal in Matsue.  In particular, viewing sunsets on the banks of Lake Shinji, the larger of two lakes that the city is situated between, is something which many people -- locals and visitors -- make a point to do.  And suffice to say that I loved the sunset views on Lake Shinji so much that I ended up checking them out on not just one but two days during my stay in this city that I now associate with its impressive castle, an interesting man who was born European but died Japanese, and truly glorious sunsets. :)
Posted by YTSL at 5:58 PM

Lovely photos and a good read, as usual! :) I really should explore more than just Tokyo and its surrounding areas. But I'm currently in love with Japanese music. Kajiura Yuki, FictionJunction and Kalafina to be specific. And for that reason, I keep going back to Tokyo because of the concerts. :P

Lovely to hear from you again! Aren't there concerts elsewhere in Japan than Tokyo? Surely that's the case! ;b

Also, places like Kamakura, Hakone and Nikko are a doable day trip away from Tokyo. And some parts of greater Tokyo (e.g., Kawagoe, Mitaka (home of the Studio Ghibli Museum) and nearby Koganei (home of the Edo-Tokyo Open Air Architectural Museum) are interesting in themselves! :)

Puppet Ponyo looks happy to be in Japan and visiting a castle. Lovely sunset, no gorgeous sunset.

Puppet Ponyo *was* happy to be visiting Japan! Keep on visiting this blog over the next few days to see more Puppet Ponyo photos -- and Lake Shinji sunset pics too! ;b

Anyone who visits this site regularly will know that when you don't blog for a week or longer - you're likely traveling and taking along your faithful companion, Puppet Ponyo - and here she is posing in your initial entry of your Japan trip.

It seems to me that you're becoming somewhat of a connoisseur of Japan travel.

Teehee yes re what regular visitors to this blog will know. And yes, I do enjoy travelling in Japan -- perhaps because there are so many places to go which aren't on the usual tourist itineraries, yet still are fairly easy to get to should you be so inclined! :)

I suppose I could go to their concerts when they are on their Japan tours but I tend to end up in Tokyo partly because I have friends there and I like meeting up with them. :)

I have explored places around Tokyo like Hakone, Yamanashi, Kamakura etc but not that extensively except maybe Hakone. I think I should go further though. Your Japan trip posts always make me feel that way. :)

Next year, I'm scheduled to go to attend a friend's wedding which will hopefully be in Okinawa. I think that'll be a good opportunity to check out that part of Japan.

It's cool that you have friends to hang up with in Tokyo! But the more I visit Osaka, the more I feel partial to its people -- who I find friendlier than most. And I love that they're into food too! ;b

You have (travel) plans for next year already? Wah... I find it hard to think beyond more than a month or two!

Re Okinawa: it felt like the least Japanese part of Japan that I've visited -- and there are historical and cultural reasons for this being the case. :)