It's a running joke among my some of us who regularly hike in Hong Kong that sometimes, getting to the official hike start is the most difficult part of the trek.  Among the reasons is that there are official trails that seem to have trailheads seemingly in the middle of nowhere: i.e., with official directions stating something like "Walk 45 minutes from X bus stop to the starting place for the hike at Y"!  (For an example, check out the Transport Information page for the War Relics Trail.)

Then there are those hikes, like the one a friend and I went on that took us from Tai Lam Chung just to the south of the Tai Lam Country Park to Ho Pui over to the north of the country park, where it took us to a few minutes to realize that the trail we were looking for was several hundred meters on the other side of a guard post of a couple of correctional facilities (i.e., prisons!) from the minibus stop we had got off at, and that the guard knew to cheerily wave bewildered hikers past!

After the surreal -- to us -- start, things settled down and my friend and I spent a pleasant few hours hiking past the kind of sights we have come to expect to see while out rambling in Hong Kong country parks: i.e., a reservoir (or two), green fauna, some cool critters (human as well as non-human) for a bonus! :) 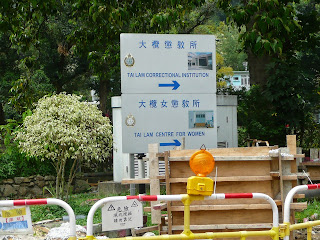 Just passing through, thanks! ;b 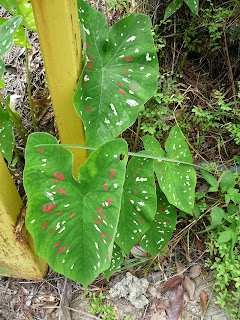 Don't the red and white splotches on the leaves
look like they've been painted on? :O 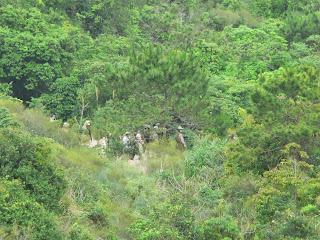 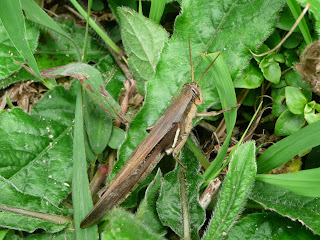 It also appears to be home to a healthy number of grasshoppers! 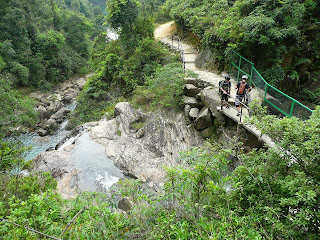 Who says hikers and mountain bikers can't share a trail? 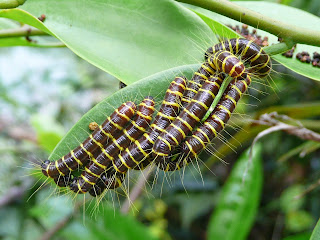 To those freaked out by these creepy crawlies,
bear in mind that they'll turn into beautiful butterflies (or moths)! :) 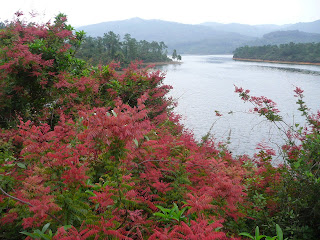 It wasn't autumn but some leaves were beautifully red :) 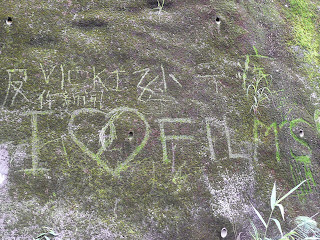 I didn't write that -- but I do agree with its expressed sentiment :b
Posted by YTSL at 6:48 PM