A very quiet graveyard and giant tortoise at Gesshoji 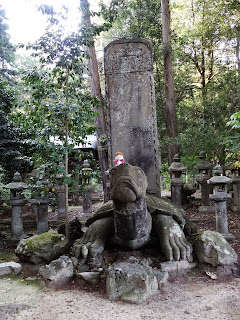 Sometimes I like to put Puppet Ponyo in a photo so that
one can get a good idea of the size of something else in it!

Another panoramic photo that I hope you'll click on to enlarge
for a better look at the subject :)

I know most superstitious Hong Kongers would never believe it but there are cemeteries and graveyards in many parts of the world that have become tourist attractions -- and I've been to a few of them (including London's Highgate Cemetery and more than one of New Orleans').  And while in Matsue on my recent Japan trip, I made a point to head out to Gesshoji -- a Buddhist temple whose fame looks to stem most from its atmospheric grounds being the final resting place of nine feudal lords of the Matsue domain and the first lord's mother Gessho-in, after whom the temple (originally called Touunji) was renamed.
Located approximately 800 meters to the west of Matsue Castle, Gesshoji feels distinctly off the beaten tourist track.  Or, as the author of the Frommer's Japan guide put it: "What I like most about [its] cemetery is that it seems ancient and forgotten; you might find yourself the only living soul here" -- and this despite the cemetery being more likely to attract tourists than the temple buildings (though visitors really should check out the Treasure House, especially as there's no extra admission fee to it, as is the case for many other temples I've been to in Japan)!


For the record: on the two occasions I visited (because my first visit was too close to its closing time), I spotted a total of just three other visitors to Gesshoji!  And so quiet were things at the sprawling temple grounds that the first time around, it did feel uncomfortably eerie while the second time, the loudest sounds that could be heard were the muffled ones of tennis balls being hit during the physical exercise period for what appeared to be all of the students at a nearby school!


There must have been -- even still are?  -- times when the temple renamed as Gesshoji in 1664 is a more bustling place.  For instance, I can imagine that the funerals for the nine lords buried there must have been big affairs based on how large and elaborately decorated several of their tombs are.  In addition, it's mentioned in the temple brochure that Gesshoji's the site of annual formal memorial services held for used tea whisks (on account of the seventh Matsue lord, Matsudaira Harusato, having been a renowned tea master, under the name Matsudaira Fumai) and also is famed for its hydrangeas (so the local people may be most likely to visit when those flowers are in bloom)!


Still, I wouldn't be surprised if Gesshoji is usually as, well, dead as I found it to be for the most part.  And if so, I can easily imagine that this would have contributed to the temple having supernatural tales associated with it, notably about the giant tortoise statue erected in the vicinity of the sixth Matsue lord's grave that was given to nocturnal wanderings -- including to drink water at a pond located elsewhere within the temple grounds -- until a large and heavy stone monolith was placed atop it!

There's another legend that good luck will come to those who pet the top of the giant tortoise's head and I figured this was worth doing.  Puppet Ponyo, on the other hand, opted to sit atop the creature's head.  I guess she was emboldened to do so by no harm having befallen her after she sat on the neck of an admittedly smaller tortoise effigy at Hanoi's Temple of Literature! ;D
Posted by YTSL at 9:52 PM

You use the description, "atmospheric grounds" which accurately describes the impression I get from this photo-essay - and the reason I came back several times to view this...I'm not for sure what the correct term for Japanese ghost is (Yokai or Yurei?) - but that panoramic photo summons images of a widescreen ghost realm in my mind...Another classic Ponyo photo (which does recall the one in Hanoi). In this photo, the stone tortoise looks up and appears puzzled at the presence of this plushie sitting on its head like some nature spirit who roams the grounds.

Re the correct Japanese term for ghost, the following is a link to an exhaustively informative blog post!

To add to the description of Gesshoji: occasionally, one could hear a crow cawing...

BTW, when I first put Puppet Ponyo up on the stone tortoise's head, she threatened to topple over. I think she was feeling on the fearful side there... ;S