Cart: a Korean drama that may resonate with Hong Kong Umbrella Movement members and supporters 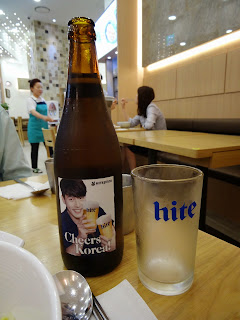 In the wake of the political protesting that took place on the streets of Hong Kong during much of the second half of last year, I wondered if there'd be many protest-oriented films screened at this year's Hong Kong International Film Festival.  And although there weren't any from Hong Kong itself, there were indeed a fair few in the HKIFF program, including the likes of 1989 and Pride.

Even on the commercial cinema circuit, there have been offerings in recent months that have resonated with supporters of the Umbrella Movement.  Chief among these has been Selma, whose relevance to Hong Kong was made obvious by Common in his Oscar acceptance speech.  And coming to Hong Kong cinemas next Thursday (May 14th) will be Cart, a South Korean drama pitting long suffering people who decide they need to make a stand against injustice that possesses scenes that will definitely bring to mind last year's "occupation" for many of its Hong Kong viewers.


Based on real life events that took place in 2007 and involved a supermarket chain who sought to illegally replace its contract workers (cashiers and cleaners, all of them women) with outsourced employees, this ensemble drama's early section plays out like a farcical comedy, with employees being instructed to bow and scrape in front of the store customers and even address them as "beloved customers" and other exaggerated honorifics.  Quickly though, it becomes apparent that this mega supermarket can be a veritable nightmare to work in; with one humiliated employee being made to kneel when apologizing to an angry customer and tired women being regularly asked to work overtime without any extra pay.


Desperate to hold on to their low-paying jobs (in what appears to be a recession where even university graduates end up working as supermarket cashiers), the women suck it up for the most part.  And even when they finally rise up in protest, it's actually because they seek a return to the status quo rather than ambitiously demand far better terms.  (Does all this sound familiar, Hong Kongers?  It sure does to me!)


Although some are scared and others initially skeptical, the women collectively reach a decision to go on strike (rather than work for the remaining days they have been told to) and "occupy" the supermarket space.  But what initially seems like a feminist tale -- whose main characters are a model worker cum mother of two (Sun Hee), a tough single mother (Moon Jeong Hee) and a motherly cleaner whose matronly nature belies her possessing a fighter's spirit (Kim Young Ae) -- becomes more universal when some male workers, notably a young assistant manager (Kim Kang Woo), also get to realizing how terribly callous their employers and their suited accountants and advisors are.


As the seasons change and the protests drag on, the film itself begins to drag a little.  On a related note: while there's something admirable in wanting to flesh out the stories of several characters, Cart does suffer from having too many sub-plots; with the one involving a rebellious teenage son (played by K-pop singer Do Kyung Soo) being that which would get my vote for being the least necessary to include in the overall tale.

At the same time though, there's little doubting that those who sought to tell this David vs Goliath tale have their hearts in the right place.  And there definitely are scenes in this film which will put a lump into one's throat -- and perhaps get people realizing (if they didn't before) that righting injustice is not easy and does not happen overnight... but eventually, especially when people put up a united, commited front, we can overcome.