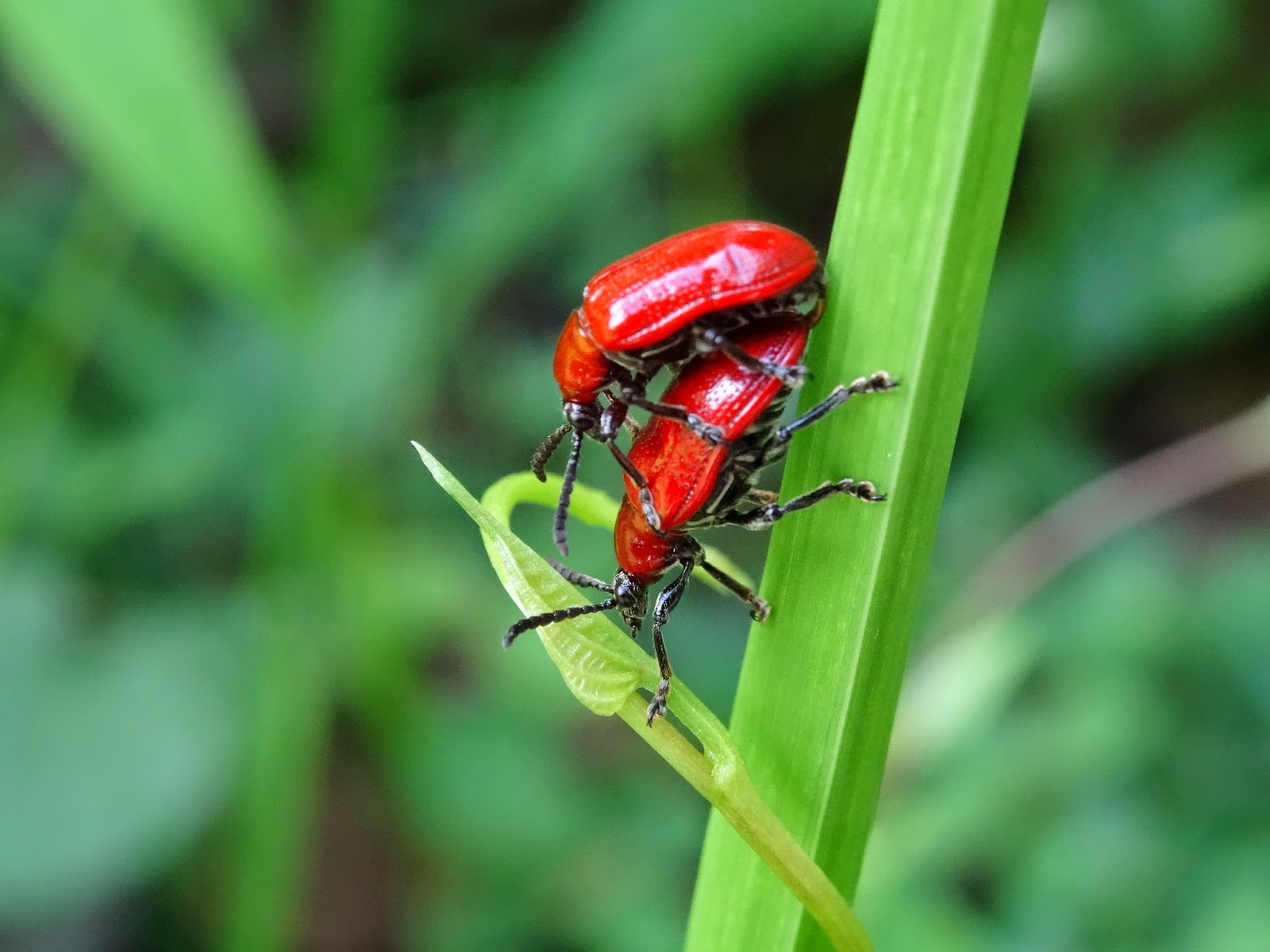 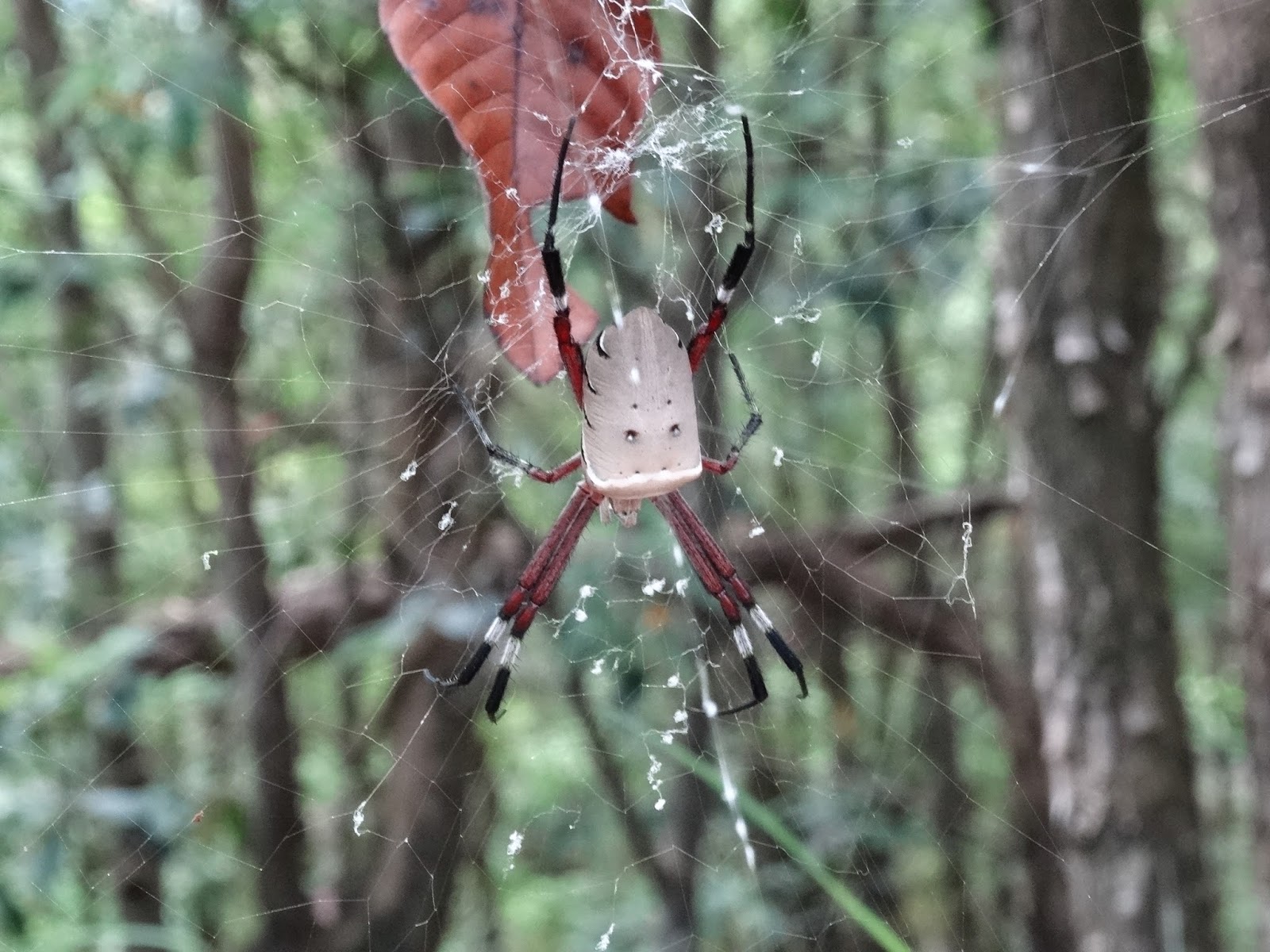 One of the stranger looking spiders I've seen in Hong Kong! 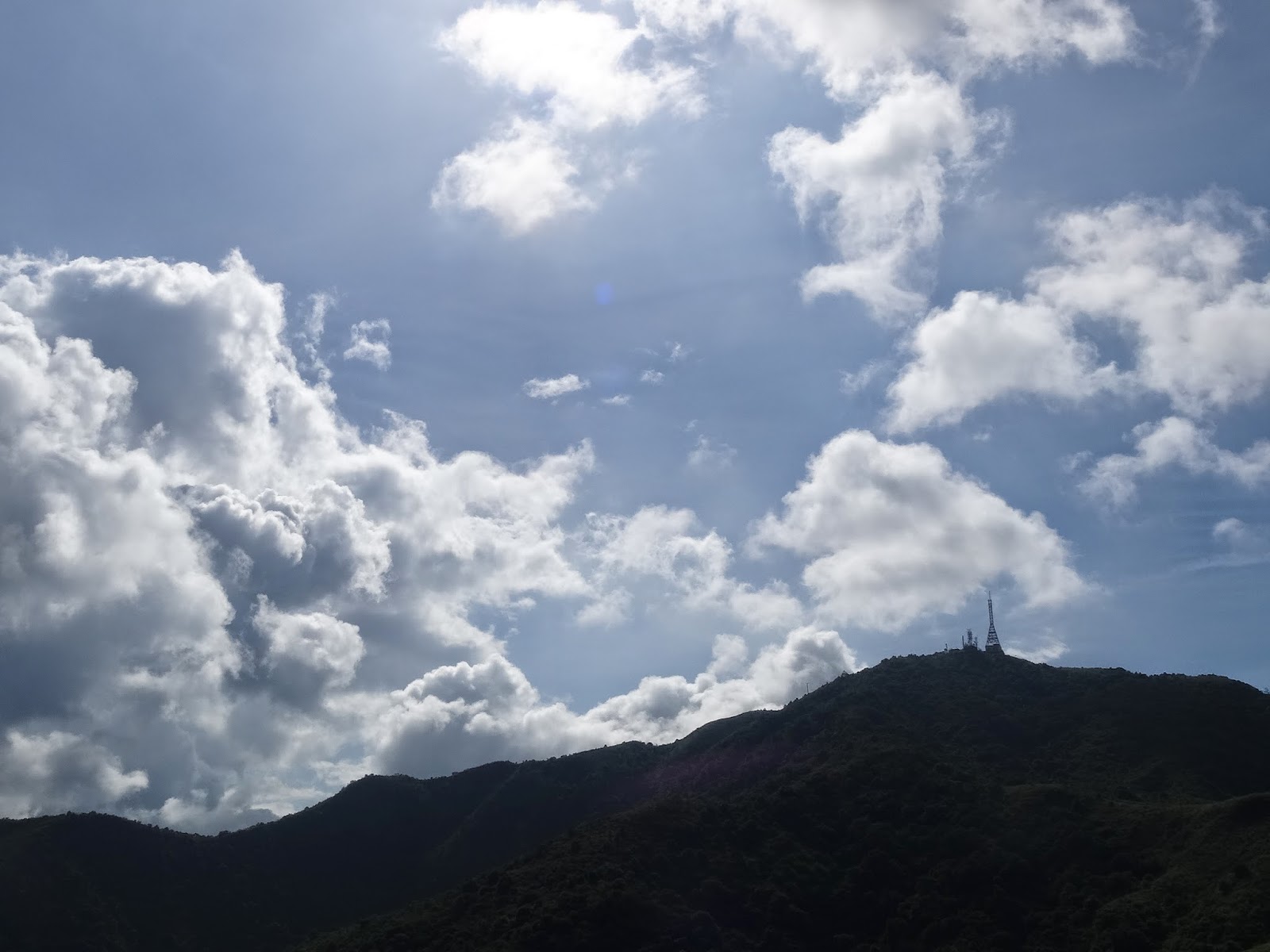 And should anyone wonder, yes, it was pretty beautiful
out there weather-wise this afternoon :)

About 10 minutes into the hike I went on with two friends this afternoon, I felt like I already got my picture of the day -- and this despite my knowing that we'd be passing through some scenic parts of Hong Kong on this trek from Lau Shui Heung Irrigation Reservoir down to Fung Yuen via Hok Tau Reservoir and Sha Lo Tung.
And should there be any doubt: yes, I'm indeed referring to my photo of the two beetles going at it to add to my critter sex collection that also includes such as butterflies, dragonflies, grasshoppers, stink bugs and tortoises going at it!  For not only do I now have a shot of one more species for that, um, fascinating collection but the image I captured is so very clear and detailed!
But about an hour into the hike, another photo of the day candidate emerged -- and with this one, I feel a need to point out that I really did see a spider that looks like it's got a human face on it!  And even if it could be argued that the face looks more like something that a child or cartoonist would draw rather than one that exists on a real human, you've got to admit that it's still pretty startling to see on a spider!
More than by the way, if anyone can identify what type of spider this is, I'd appreciate it -- because, as I'm sure many people would agree, a sighting of it as memorable in its own way as that of the super large Golden Orb Weaver spiders! (And for the record: I've seen this spider species at least twice before -- both previously on Lantau Island -- but the one spotted this afternoon was the largest of this type that I've seen -- hence it being easier to take a good, clear photo of it.)

And should anyone wonder: unlike certain hikes when I've focused on bug spotting and such because the air was not clear and I couldn't see as far as I liked, today actually turned out to be pretty good weather-wise: hot but not too humid, with bright blue skies and nice fluffy white clouds providing some welcome cover, and great visibility for miles (so much so, in fact, that from Sha Lo Tung, one could see a tower located on the other side of the Hong Kong-Mainland China border!).  Also, I've been on hikes with far more bug spottings than today, including my recent Lai Chi Chong excursion.
To help balance things out then, here's also offering up a non-bug photo also taken today which I trust will give a good idea of how beautiful this afternoon was.  In view of this, it's actually pretty surprising how few other hikers we saw today -- though, of course, I'm not complaining since not seeing and hearing many other people while on the trail helped make for an even better overall hiking experience to my mind! :)
Posted by YTSL at 10:06 PM

Oh my!!! You definitely caught some action there! When are we going to see a blog dedicated to this passionate subject?!

That's too specialized a subject for me to dedicate a whole blog too! You may think that it's easy to spot such action since you saw some on only your second hike with me but they're not something one regularly comes across on hikes!! :D

A few years back I spotted quite a few things along that route, but I was walking the other way round:

1. Lots of butter flies big and small;
2. A very big moth with wing span as big as my palm;
3. A whole batch of new-born baby Mantis, which were already quite hostile;
4. A few very big wasp nests made of leaves high up on some trees;
5. Logs of living things in the streams at Sha Lo Tung;
6. I did not see any big spiders that time, but there were many long legged spiders with small red body scurrying around the grass around;

You went up from Fung Yuen to Sha Lo Tung via Lau Shui Heung/Hok Tau? That's a more difficult hike for sure! I've been to Sha Lo Tung a few times -- thus far from Cloudy Hill down or from Hok Tau to that picturesque area of Hong Kong.

At the right time of the year, definitely get lots of bug spottings. Have never seen mantis insects though along the route.

BTW, the long legged things you see: they're arachnids but not spiders -- and they're known as Harvestmen... like the one in one of the pictures in the link below, right? ;b