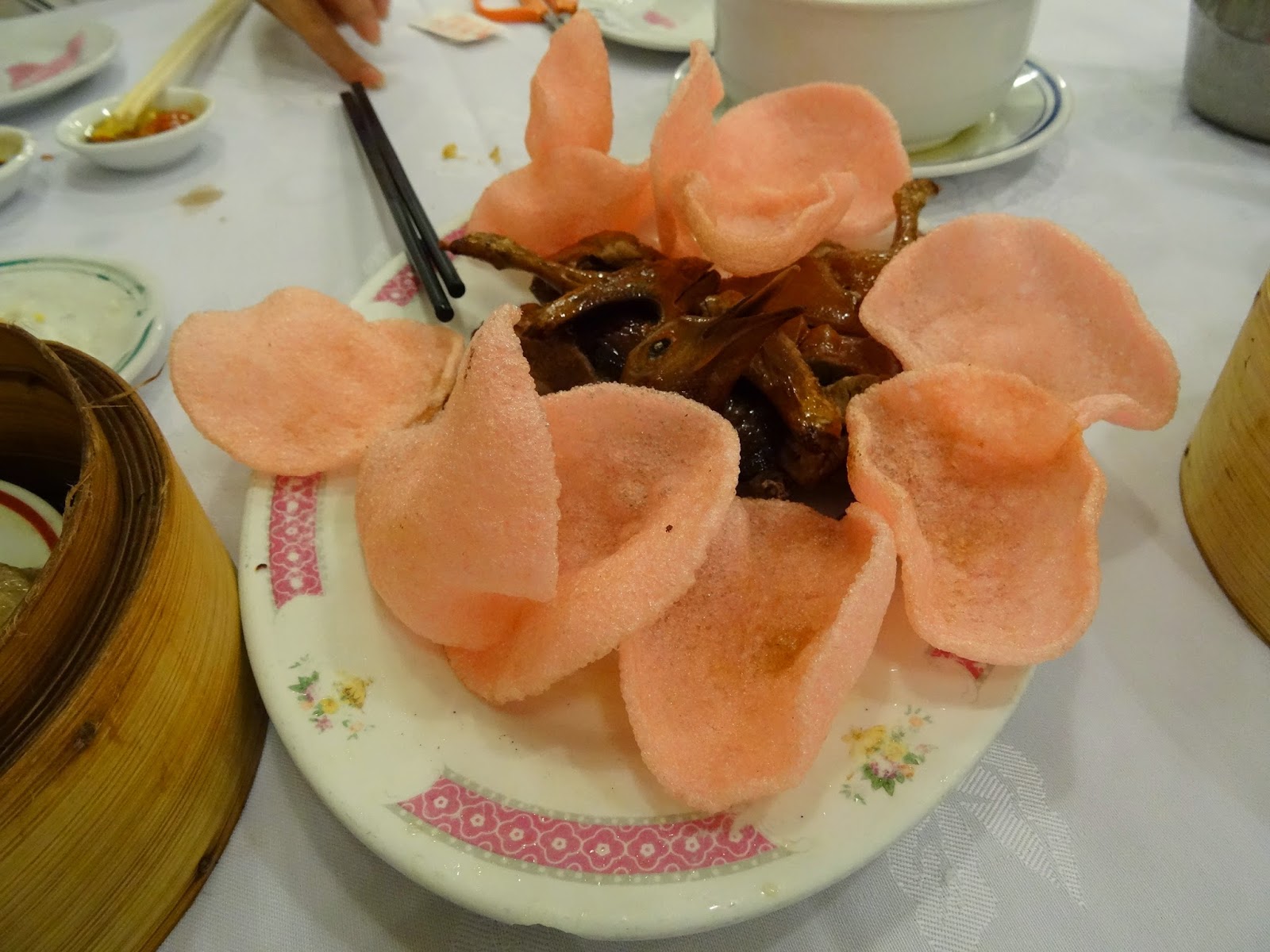 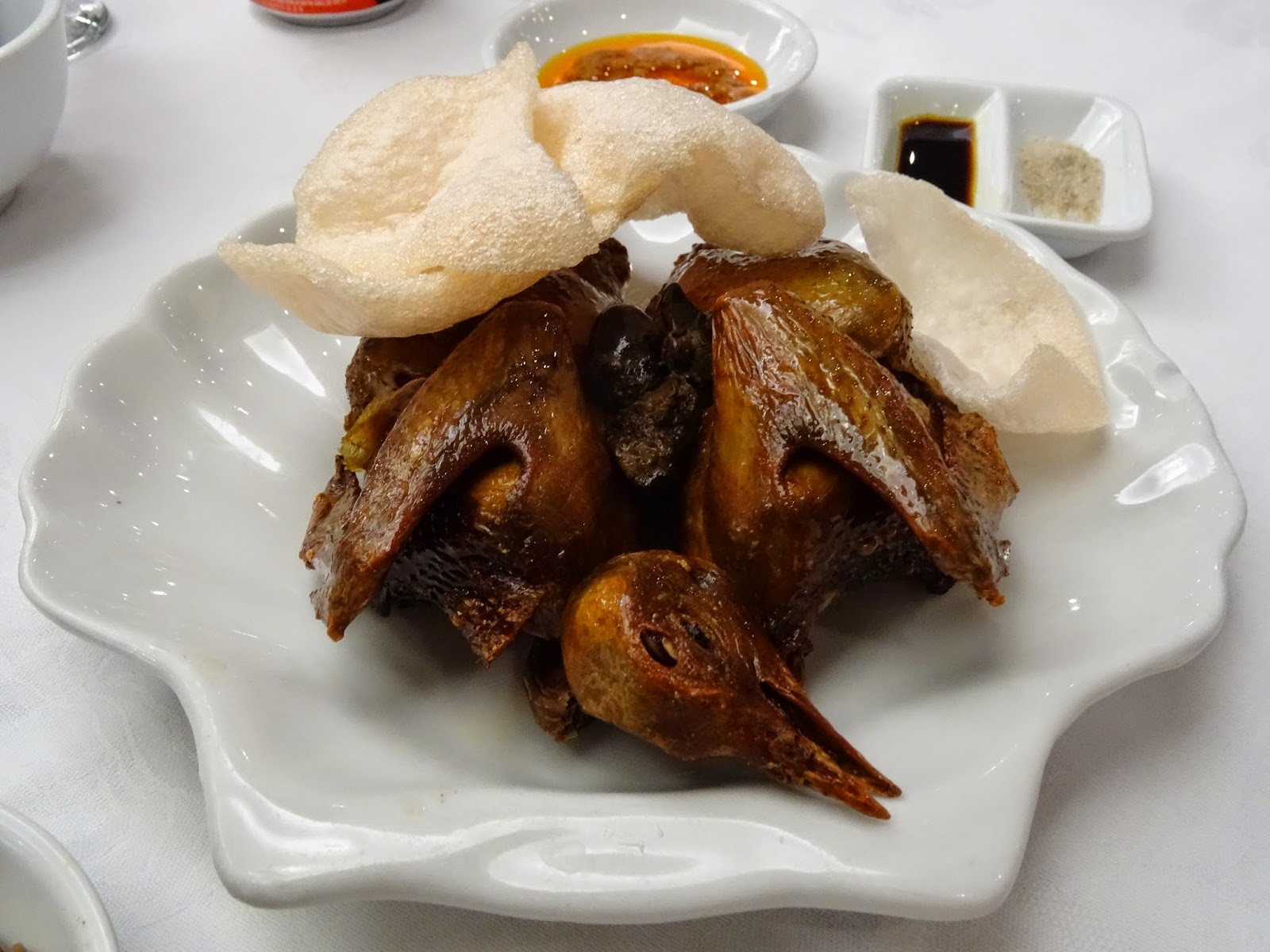 ...but I have to admit to drawing the line at pigeon head!

Over a tasty Korean fried chicken dinner this evening, my mother, a friend and I were talking about how different cultures like different parts of the chicken.  More specifically, it's been our observation that whereas Westerners prefer the breast, Asians tend to prefer either the wing or the drumstick, feeling that the meat that's closer to the bone is juicier than the meat that's not.  And of course, we all have noticed that, whereas the Chinese tend to love eating chicken feet, Westerners often freak out at the idea of eating that part of the bird.

Thinking some more about what people like to eat, I got the impression while living in the US that chicken are Americans' favorite bird to eat by a long chalk, with turkey tending to be favored only on Thanksgiving Day -- or by those looking to consume a healthier meat.  On the other hand, even while chicken wings are a popular snack in Hong Kong, I'm not so sure that chicken tops many -- never mind most -- Hong Kongers list of favorite bird to eat.

For my part, even before moving to Hong Kong, I had never been that big a fan of chicken generally -- though it's true enough that I way prefer it to turkey, which I find to be on the tasteless side.  Also, while I do enjoy eating chicken yakitori, I think it says quite a bit about my tastes that my favorite eats at Yardbird are the corn tempura and Korean fried cauliflower!

Nowadays, if I were asked what's my favorite bird to eat: I'd say that I prefer duck to chicken, and goose to duck, and like pigeon best of all.  As to how I like it cooked: I'm equally happy with roasted pigeon, fried pigeon and braised pigeon.

Suffice to say that I've eaten a number of pigeons since moving to Hong Kong, including at the very traditional Luk Yu Tea House in Central and Tai Wai's also old school Fung Lam Restaurant and Shui Wah Restaurant (but not (yet) at the Lung Wah Hotel in Sha Tin which may well be the most famous pigeon restaurant in Hong Kong but has received a number of negative reviews by various foodies in recent years).

Something that I've noticed everywhere I've eaten pigeon in Hong Kong is that the head of the bird always is served with the rest of it.  As far as I can remember though, I've never ever seen anyone eat a pigeon's head.  So... is it a case of it being included for show -- or are there people out there who actually eat -- and enjoy eating -- what I imagine to be a not particularly meaty section of the bird?!  (And while I'm asking, why is it that roast pigeon seems to always be served with prawn crackers in Hong Kong??!!)
Posted by YTSL at 11:07 PM

So much work, gnawing on those scrawny pigeons -- have you tried the ostrich steak at The Stoep in Cheung Sha? : )

Haven't tried ostrich steak at The Stoep but have done so back in Malaysia -- and also has some ostrich in a hot pot in Causeway Bay. Have to admit that I'm not a fan -- too gamey!

Re The Stoeop: I prefer their home made bread and chicken burger! ;b

Hmm... what about internal organs? The lungs and livers of chickens, ducks/goose are delicacies.

I especially like the Chiu Chow style Lo Sui Liver of ducks/goose. The ducks and goose are not generally being fattened for Chiu Chow style and they are usually very good.

If you have not tried it before, you should.

Oh, concerning sucking cooked bird claws...... during my days in Los Angeles a bit more than 10 years ago, I heard the Mexicans had been competing with local Chinese and Vietnamese for these goods.

Internal organs almost seem like an entirely different category of food! And yes, I like chicken liver -- it's one of the things I tend to order when eating yakitori. OTOH, I like beef lung best of the lungs, I think. ;)